Girl in / on / at / with a Mercedes (when talking about driving, possession and demonstration) [duplicate] 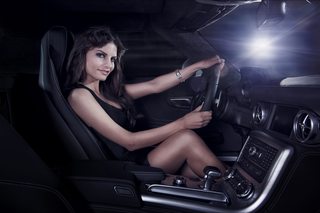 A girl is driving a Mercedes. Or maybe she is just sitting on a driver's seat. She owns this car, or maybe the car is her mother's and she is just flossing.

When referring to this girl, in Russian we usually say "девушка на Мерседесе" (girl on a Mercedes). Saying that we don't mean "a girl on top of a Mercedes". We mean "a girl who is driving a Mercedes", or "a girl who is sitting on a driver's seat or looking out the driver's window". It also has some connotations of possession and demonstration (of the car).

But what's with American English? What preposition would be more appropriate for this exact situation? Is there any equivalent for the Russian "девушка на Мерседесе"?

I need to refer to her in a sentence like:

Which preposition do American English speakers use — in, at, on?

In Russian, I can also say "девушка в Мерседесе" (girl in a Mercedes). All these Russian sentences are correct and all these sentences mean that the girl is inside the Mercedes. I wonder if it's the same in American English.

You could have the girl "on" the car, but this implies being on the outside eg. lying/sitting on the bonnet or hood.

Not the answer you're looking for? Browse other questions tagged prepositions in-on at-on or ask your own question.