A word for sling's big brother

When playing Stone Soup I've stumbled upon a weapon which name I've never heard before. The description said, more or less, that it's a sling's big brother, with its missile pouch attached to a long stick instead of a string. I've had no use for it, so I've left it where I found it. In half an hour, I've promptly forgotten the word for it, and it bugs me now greatly. How is such a weapon called?

There are a large number of sling variants, but you are probably referring to the fustibalus.

The staff sling, also known as the stave sling, fustibalus (Latin), fustibale (French), consists of a staff (a length of wood) with a short sling at one end. One cord of the sling is firmly attached to the stave and the other end has a loop that can slide off and release the projectile. Staff slings are extremely powerful because the stave can be made as long as two meters, creating a powerful lever. Ancient art shows slingers holding staff slings by one end, with the pocket behind them, and using both hands to throw the staves forward over their heads.

Popular Mechanics has an article where they describe two types of projectiles used by fustibalus-wielding Roman soldiers. Ome was large and lemon-shaped, and the other was smaller and used more like buckshot. The article speculates on the purpose of holes drilled in the smaller projectiles, namely that they made a whistling noise whose purpose was to inspire fear in the enemy. ("Incoming!") 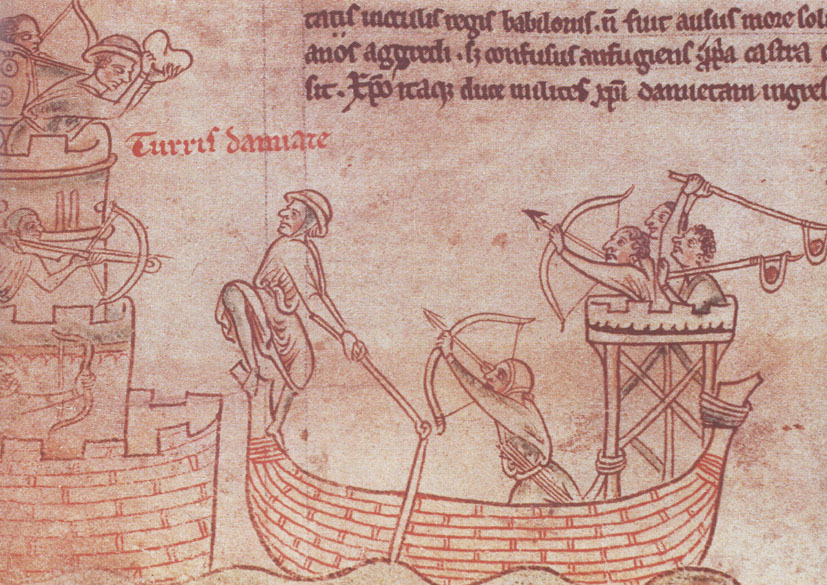 Two men on the stern castle of the ship in this medieval drawing are wielding pole slings, ready to let their missiles fly.

13
What's a big-vocabulary word for someone with a big vocabulary?
4
A single word for “not seeing the big picture”
3
What is the English word for this big pipe?
1
Is there a word for my father's ex-wife's brother?
0
Formal word/phrase for “in one big move”