Are jeeps just jeeps or are they named after the brand?

I have wondered this for a while now. The US Army vehicle - the jeep - did it get its name through coinage or through the Jeep brand?

I feel like it came about because of the brand name/make, but Etymonline offers the following explanation for the noun "jeep":

jeep (n.)
early 1941, American English military slang, acronym from G.P., abbreviation of General Purpose (car), but certainly influenced by Eugene the Jeep (who had extraordinary powers but said only "jeep"), from E.C. Segar's comic strip "Thimble Theater" (home of Popeye the Sailor). Eugene the Jeep first appeared in the strip March 13, 1936. The vehicle was in development from 1940, and the Army planners' initial term for it was light reconnaissance and command car.

The generally accepted origin of the name 'jeep', as applied to a lightweight motor vehicle and later adopted as the brand name of similar lightweight and other vehicles, is from a pronunciation of the acronym GP, which is said to stand for General Purpose. This is the etymology given by OED and hence in most of its particulars, by Etymology Online:

[from] the initials G.P. /dʒiː piː/ ‘general purpose’, probably influenced by the name ‘Eugene the Jeep’, a creature of amazing resource and power, first introduced into the cartoon strip ‘Popeye’ on 16 March 1936 by his creator E. C. Segar.

Per H.L. Mencken's rather lengthy examination of the origins of 'jeep' in The American Language: Supplement II (1948, pp 782-5) the etymology from GP is uncertain, at best:

Jeep seems to be authentically American, but the history of the word is almost as obscure as the history of the car itself...The first batch of seventy jeeps was produced by the Bantam Car Company in 1940...It was by then apparent that the United States would soon be in the war, and the fear that the Bantam Company might not be able to produce the new cars fast enough caused the Army to let contracts for them to other companies, including Ford. The fact that the code symbol of Ford on Army cars was GP has led to the surmise that the word jeep was born there and then, but there is no evidence for it. Nor is there any evidence that the word came from the same letters in the sense of general purpose, for the first jeeps were not called, officially, general purpose cars, but half-ton four by four command-reconnaissance cars.

Mencken, as OED and so Etymology Online following him, credits E.C. Segar's character "Eugene the Jeep" with influence on the later adoption of 'jeep' as the name of the car. Mencken, however, does not describe the influence of that character's name as 'probable' (OED) or 'certain' (Etymology Online), but rather compares that influence with the likely influence of either "general purpose", or GP as the code symbol of Ford on Army cars:

It seems to be much more probable that the name ['jeep'] was borrowed from...Eugene the Jeep.

Mencken goes on to observe that "[who] first applied jeep to the new Army car is not known, but a claim has been made for a Sergeant James T. O'Brien". The evidence for that claim is "shaky", Mencken says, because the "baptism is dated 1937, when the car was still in its early experimental stage". Instead, Mencken mentions evidence (from American Notes and Queries, May, 1944, pp. 26-27, presently unavailable to me) that "an Oklahoma manufacturer named Erle Palmer Halliburton gave the name to a different car, half truck and half tractor, during [1937]".

Whatever Halliburton's claim to first use may be, Sgt. O'Brien does have a parallel claim, not from 1937, but rather from 1940. He makes the claim himself (as published in 1944, in a letter to Minneapolis-Moline Power Implement Company), and his claim is corroborated by at least one other who was on hand for the christening:

Bon D. Grussing
Minneapolis-Moline
Minneapolis, Minnesota.
Dear Sir:
In 1940 while on maneuvers at Camp Ripley with the 109th Ordnance Company, Captain Schiska commanding, I was placed in charge of the testing of four (4) Minneapolis-Moline prime movers, which were subsequently assigned to Company A Tank Company...as reconnaissance vehicles.
One evening in a gathering of enlisted men, it was suggested that a short descriptive name be found for these vehicles, such names as "alligators" and "swamp-rabbit." I brought forth the name "Jeep" as a result of reading "Popeye the Sailorman" in which Eugene the Jeep appears as a character, and the fact that the vehicles would go where you would least expect them to go. This name was unanimously accepted and subsequently painted on the vehicles, which have since become familiarly known.
Yours very truly,
(Signed) James T. O'Brien,
Acting 1st Sergeant

(From "What Those Who Know, Have to Say, About the Origin of the Real 'Jeep'", an advertisement in the Star Tribune, Minneapolis, Minnesota, 05 Jan 1944. Paywalled.)

The claim made by O'Brien is corroborated, in another letter printed with the same full page advertisement, by no less a person than the Captain Schiska mentioned by O'Brien in his letter:

Here are the facts in regard to the origin and the name of the "Jeep."
The birth of the "Jeep" really began about December, 1938. It was then decided that a pilot model be constructed for some sort of a prime mover to be used by the United States Army....
These prime movers in question [later models than the first mentioned] were completed just prior to the Fourth Army Maneuvers in Camp Ripley, the latter part of August and the first part of September, 1940.
It was during the Fourth Army Maneuvers that the name "Jeep" was first used by Sgt. O'Brien. I am also enclosing a roster of the Company which shows him as a bonafide member of the 109th Ordnance Company.
....
Sgt. O'Brien was so enthusiastic about knocking down trees, going through the woods breaking trail for the tanks, and pulling stock cars loaded with horses that by accident he started to call the vehicle he was driving a "Jeep" and from that day forward the word "Jeep" had been substituted for the name of prime mover....
The word "Jeep" was so deeply impressed upon these boys' minds that when command cars were issued, the command car became known as a "Jeep." It was not until early summer, 1941, that Willys-Overland Scout cars appeared in the Louisiana Maneuver district and these cars upon arrival were called "Jeeps."
The term "Jeep" has become so familiar in the Army today that many of the vehicles are being nicknamed "Jeep."

No obvious reason to doubt these first-hand accounts of the proximate origin of 'jeep' as the name of the familiar army vehicle was revealed by my research. The gist of the accounts is proudly summed up by the original manufacturer, Minneapolis-Moline (MM):

This new MM army vehicle was not a crawler, tractor, truck nor tank, and yet it could do almost anything and it knew all the answers. Because of this, it brought to mind the Popeye cartoon figure called "JEEP" which was neither fowl nor beast...The National Guardsmen therefore named the MM vehicle the "JEEP". "The Jeep" name therefore is not a contraction of the term General Purpose (GP), and if it really had been, no doubt "Jeep would have been spelled "GEEP."

As Mencken points out, and elaborates, "jeep was in the air" at the time. Not only did Eugene the Jeep first appear in the 15 Mar 1936 E. C. Segar "Thimble Theater" comic strip (last panel of the strip is dated "3/16", yet the strip appeared in the 15 Mar 1936 Jacksonville Daily Journal, Jacksonville, Florida), but 'jeep' was in use 1937-1940. An article about Army slang from the 25 Nov 1940 issue of The Minneapolis Star (paywall) mentions some of the more general uses:

Evidence of those uses shows up in other popular press articles and publications.

...the Link Trainer for aviators...a recruit...ill-fitting hats and coats...an autogiro was a jumping jeep, and the barracks where recruits were quartered was a jeep-town. In 1938 Jerome Barry reported that jeep was then in use among soda-jerkers to designate a slow and incompetent colleague, and in 1940 a writer...said that it was used among automobile finance men for "one who rides with the adjuster in order to drive back the cars repossessed." The English, during World War II used it for a radio operator and also for a member of the Royal Canadian Naval Volunteer Reserve.

My own observation is that 'jeep', especially in its Eugene the Jeep incarnation, has chronological, phonological, semantic and cognitive ties with the truncated oaths 'jeez' and 'jeeps', and the minced oath 'jeepers'. 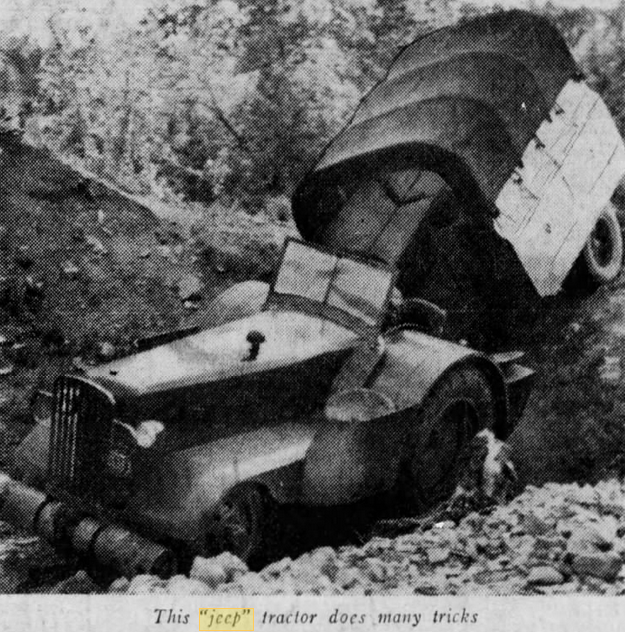 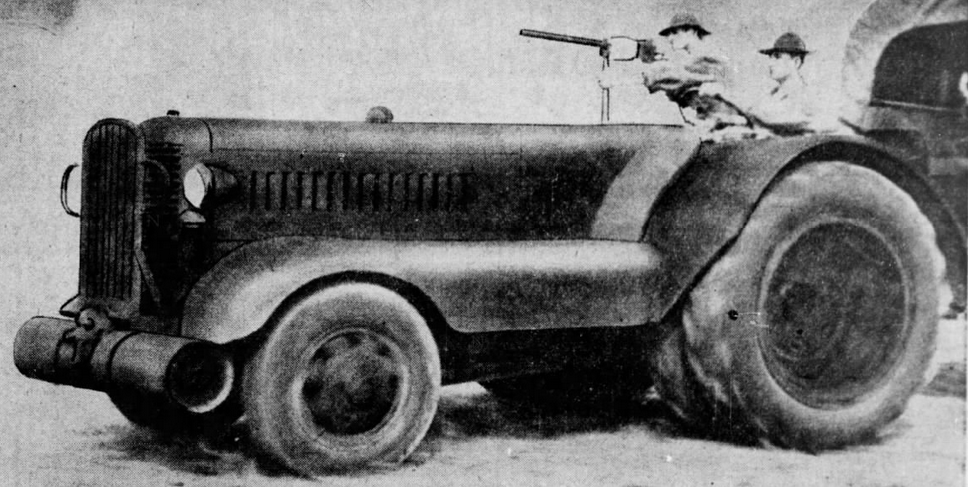 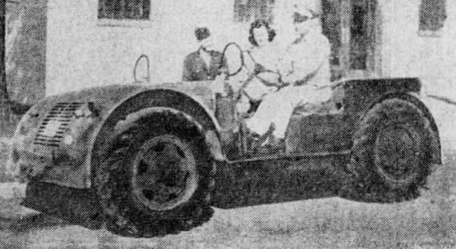 20
"Battery" and "Battery", why are they called the same?
3
Stabbing and running, how are they related?
3
Etymology of "mortgage" and "deed". Are they both related to "death"?
5
The origin of "It's just one of those things"?
17
Why is the action of removing a digital file named "Delete"?
2
Why is the tendon named after Achilles?
103
Are the dual transportation and learning meanings of both "coach" and "train" just a coincidence?
2
Passionarity vs Passion, are they of the same origin?