How did “to doctor” come to mean “to falsify"? [duplicate]

Doctor as a noun originally comes from French “doctour” from Latin “docere”, to teach; all terms with a positive connotation:

The meaning of doctor as a verb is related to the original noun. But from the late 18th century it develops a negative connotation:

This later meaning appears to be English specific, as the negative connotation does not appear to present in other European languages such as French, Spanish or Italian.

How did the term doctor develop the decidedly negative meaning of alter, falsify?

Evidence presented by OED suggests (but only suggests) that development of the figurative sense of 'to doctor', that is, "to treat so as to alter the appearance, flavour, or character of; to disguise, falsify, tamper with, adulterate, sophisticate, 'cook'" (OED), attested from before 1777 in the sense of 'to disguise',

I wish we had time to doctor his face: Against their next meeting, I will do it myself; I will manage that matter, I warrant: I learnt the art last autumn of a parcel of strollers....

Something used to ‘doctor’ or adulterate food or drink; e.g. a liquor mixed with inferior wine to make it more palatable, or with light-coloured wine (as sherry) to darken it; hence, a name for brown sherry.

The noun sense is attested from 1770 in Placid Man, &c, by Charles Jenner:

Sir George...was happy if he happened to drink his coffee in the same box with a sensible man...but the governor was as happy if he drank his Doctor next to a man who talked to him upon any thing....

In context, the first attestation given by OED for the noun sense is not clearly either use in the sense of "milk and water, with a little rum, and some nutmeg" (A Classical Dictionary of the Vulgar Tongue, Francis Grose, 1785) or use in the sense of "a composition used by distillers, to make spirits appear stronger than they really are, or, in their phrase, better proof" (op. cit., the second attestation of the noun sense from OED).

While the noun definition supplied by OED strongly suggests they intend the latter definition given by Grose in 1785 ("a composition used...to make spirits appear stronger") should be applied to the sense used in 1770, the context of that 1770 use rather more supports that the sense corresponds to the former of Grose's definitions, that is, "milk and water, with a little rum, and some nutmeg", which would make for a weaker link from this sense of the noun to the development of the verb in the general sense of 'to disguise or falsify'.

Altogether, the evidence begs the question: how did the slang or colloquial noun sense develop from earlier use? That seems adequately answered by the simple observation that, like 'doctored' human beings, 'doctored' food or drink at least for a time appeared to be better or stronger.

Far earlier than any recorded verb usage that I could find, doctor in the sense of "altered deceptively" seems to have noun roots referring to fraudulent dice.

In A Dictionary of the Underworld: British and American, slang lexicographer Eric Partridge attests this noun sense as early as 1552, whole centuries before any recorded attestation referring to wine, liquor, or other beverages, or any verb attestation.

doctors; rare in singular. False dice: 1552, Gilbert Walker, 'A finer [trick] than this invented an Italian, and won much money with it by our doctors.'

The quoted text appears in a later edition online in A Manifest Detection of the most vile and detestable use of Dice-play by Gilbert Walker. 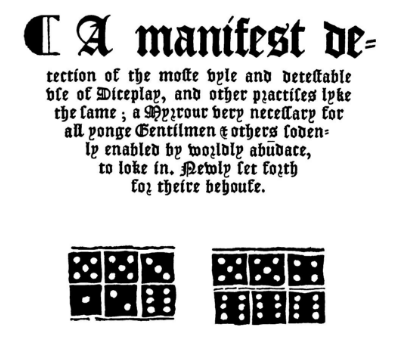 The term appears frequently in the phrase put the doctor upon him, meaning to cheat someone with false dice.

It's still possible that the term "doctors" referring to rigged dice was a figurative extension of the references to wine fraud popularly used in the 19th century, but the absence of earlier slang use describing wine or liquid tampering leads me to speculate that this sense of the word "doctor" started with dice.

This very early use in gambling slang has a meaning so compatible with the contemporary verb sense to alter something deceptively that it seems like a likely origin. Whether or not the noun form "doctors" meaning "dice manipulated deceptively" came absent a verb precursor is a valid question, since it would seem like an odd slang turn without the notion of doctoring the dice so as to create doctors, but again, there is no recorded evidence of such a verb use that early.

There is an intermediate form which remains in modern usage: "to patch up".

Since it took only 60 years for the "falsify" meaning to appear, it seems plausible to assume that it was due to the word being used more broadly in the "patch up" sense. This is especially true since the medicine of that time existed before discovery of chemistry or even of cell theory (although after the discovery of a cell).

I propose a more humble origin in a folksy use of the word doctor most of us are familiar with, i.e. She doctored him all up and he was good as new.

Interestingly Merriam-Webster lumps the use of 'doctor' "to fix" together with "doctor" to alter. There is then implied humor in the use of the term 'doctor' when the 'good result' is actually an ignoble one, though as desired by the implicit 'doctor'.

The term 'medicine' is also used in a similarly facetious, backwoods kind of way, whether to describe just "desserts" or booze.

These terms reflect that period of rampant quackery, of roadshows, snake oil hawkers, and maybe even bleeding patients with leeches. (No anesthesia or antiseptics, either!) People were rather skeptical, as now perhaps, of the medicine and practitioners of the day, and used those terms with air quotes and rolled eyes very a-often methinks.

6
Where does the phrase "doctored" originate?