All lanthanides except for lanthanum have suffix "-ium". Why lanthanum is so special, and why this particular word form has been considered canonical? Is using of "lanthanium" these days allowed, or it's forbidden?

It looks like in 19th century both forms were utilized, but since 1900..1910 "lanthanium" vanished from the grid: 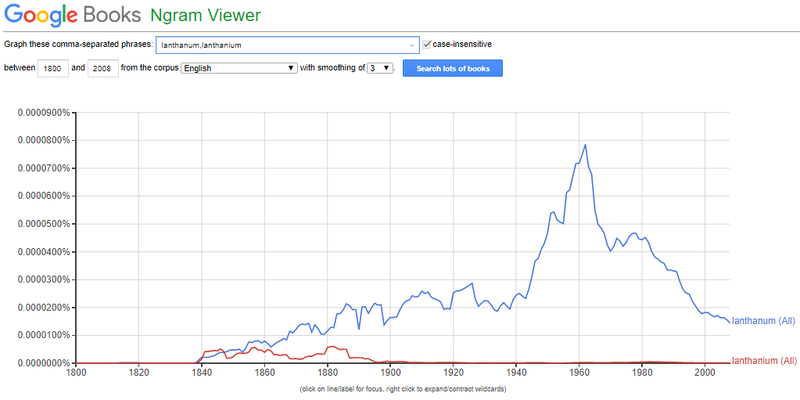 In 20th century only few authors ever used "lanthanium", e.g. some recent publications also include "lanthanium", but it is rather an exception than a rule. In the other hand, I haven't discovered any IUPAC rules explicitly declaring "lanthanium" as a word to be avoided.

There are also related topics on English.SE (Suffix ‘-ium’ vs. ‘-um’) and Chemistry.SE (Why do the names of most chemical elements end with -um or -ium?), but neither provides a distinct answer.

I doubt that it is possible to say why lanthanum won out as the standard name. However, lanthanium is not necessarily a mistake. It was one of several names used for the element, which was discovered in 1839 – well before the establishment of IUPAC in 1919 and naming of the lanthanides in 1925, and even before the development of the periodic table in 1869.

The discovery of lanthanum was first announced in French in the Comptes rendus de l'Académie des Sciences. The name given by Mosander, from the Ancient Greek λανθάνειν (lanthanein), was reported as Lantane. It is still known as lanthane in French today. When the discovery was reported in Philosophical Letters later that year the name was translated as Latanium.

There's no such thing as "lanthanium" - if you see it, it's simply a mistake, nothing more.

Lanthanum isn't the only element to end in "-um" rather than "-ium": so do Molybdenum, Platinum and Tantalum.

And, of course, many elements don't end in "-ium" at all, and these tend to be the ones discovered first: Oxygen, Gold, Hydrogen, Sulphur etc.

The "-ium" suffix is nothing more than a convention: at some point, it was decided that newly named elements should end in -ium, and people have followed that tradition. They didn't go back and rename all the existing ones to be "goldium", "oxium", "hydrium", etc - this would just be silly.

I can't explain those ngram results - as far as I know the element has never been renamed, which would be one possible explanation. Maybe there was a typo in some popular reference book which got copied into other books before everyone noticed. Or, it might be a mistake in Google Ngrams, which cannot be infallible (it would be unique among software if it was).

If you're interested in the cultural history of the elements, I'd highly recommend a book called Periodic Tales, by Hugh Aldersly-Williams.

EDIT: as GEdgar has pointed out in the comments, it's only metals that are given -ium names by convention. As it happens, most elements are classed as metals, but not all, and each class has its own suffix, such as "-ine" for halogens, and "-on" for noble gasses.

Not the answer you're looking for? Browse other questions tagged word-usage suffixes science or ask your own question.