Should I say "ATM" or "cashpoint" in the UK?

ATM is an initialism of automated teller machine, coined sometime in the 1970s. I have always considered it an Americanism while its British equivalent has always been cashpoint, Oxford Living Dictionaries tell me it is a trademark (who knew?). Wiktionary states that it was originally a registered trademark of Lloyds Bank.

Neither Oxford nor Wiktionary offers me any alternatives. Luckily, a quick Google search unearthed the following BrEng terms kindly supplied by Macmillan Dictionary:

I know for a fact that ATM is the most common term used in the US but I do not know about the UK. Is it still cashpoint? Has ATM superseded it?

Question
In 2017, what is the most common term in the UK for a machine that dispenses cash?

Source: I'm in my early thirties and have lived my whole life in South East England.

I would personally use the term "cash machine" (or the abbreviated version "machine", see further comments below). As to the other suggested terms:

The following article from The Telegraph suggests that cash machine is the more common expression in the UK.

Hole in the wall:

Also from the site British money:

Source: I'm in my early fifties and have lived from age 5 in South East England.

In colloquial English, I've never heard anything but cashpoint or machine. Which is used depends on the context.

If the context is already established as involving money, then the simple machine is probably most usual, but it may even be omitted entirely.

If money hasn't already been mentioned in the sentence, then cashpoint is usual:

"I need to find a cashpoint."

ATM is vanishingly rare in my experience. Hole-in-the-wall is deliberately jocular, although that has appeared "in the metal": 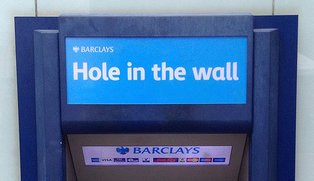 All of this does appear to contradict corpus data. Ngrams shows ATM has always been more common than cashpoint, and it appears that BNC agrees (although I've never found that easy to get data from). However, they gather data from written sources, and those may be influenced by the trademark status of Cashpoint® — something which Lloyds still take seriously:

As to answering the question: Do not use "ATM" unless you want to be marked out as someone who is less familiar with colloquial English. While it will certainly be understood, it has definitely not superseded any other term.

Cash machine so far worked for me in every English-speaking country (and some non-English speaking countries, too) that I visited, including the UK, the Middle East, Switzerland or China. It not only worked, I never got any Strange Looks™ either. Even if the locals call it by some other name, they recognize the term, even locals who do not speak English very well. The same may not be true for region-specific acronyms or genericized trademarks like ATM or Cashpoint.

English, born and raised in the north, live in the south.

Cash machine, cash point and ATM are all pretty interchangable. If I search google maps to get money out I search for an ATM though in conversation I'd say cash machine. Tbh you're good with any of those, people will know what you mean, we're exposed to enough American media to know what an ATM is.

Source: I am from the south of England and in my late 40s, but have lived in Cambridge, Lancaster, Oxford, London, Bristol, and Perth (Scotland).

My most frequently used term is "cashpoint".

"Cash machine" feels clunky and long-winded to me.

I would never say "cash dispenser" or "hole-in-the-wall", though I am familiar with the term.

I wouldn't refer to it just as a "machine", because there are many different types of machine available.

Barclays Bank introduced the first such device, and called it a Cash Machine. As shown on their archives.

However, within that archive article, the terms Cash Machine, Mini-bank, ATM and Barclaybank are all used.

It is still most common to hear it called Cash Machine. Although every major bank has a branded name for its variant. You have already mentioned Cashpoint, a trademark of Lloyds Bank. Midland Bank used first Cardcash then Autobank until it was taken over by HSBC.

ATM is rarely used as it is seen as an americanism. The word Teller is not used over here.

Bank-o-mat is the word I learned traveling in France and Italy which worked 100% of the time even in Spain, Portugal, Denmark, Norway, Sweden, Germany, Netherlands, Switzerland, Austria, Poland, and Czech. It caused a few raised eyebrows in the UK—no eyebrow raising in Gibraltar—but 100% correct comprehension.

My traveling companion used hole-in-the-wall insistently with successful communication maybe about half the time in Scotland, Wales, and N. Ireland. (I don't specifically recall reactions in England.)

The only one of those suggested terms to even come close to atm in UK Google Trends popularity is 'machine'. Machine is much more popular, but likely not in reference to an ATM.

This data covers back to 2004, and thus is unlikely to be reflecting widespread use of the term 'at the moment', which also takes on 'atm' for short.

As this information contradicts the anecdotal evidence of all the other answers, it is worth considering the possibility that perhaps people from the UK are deliberately using 'Americanisms' in their internet searches to be more readily understood.

Here's the NGram for cashpoint versus cash machine from the British English corpus:

As one can see cashpoint appears to be equally as frequent as cash machine in British English, as has been pointed out by many commenters and posters here. Bear in mind, however, that this is a written corpus and not a spoken one.

As pointed out in several posts, dispenser and hole in the wall are frequently used in the UK. Anecdotally, I very rarely hear ATM here in London, or in Edinburgh or Devon.

Unfortunately, an NGram for ATM in British English basically throws up thousands of results from books on:

Not the answer you're looking for? Browse other questions tagged american-english british-english contemporary-english transatlantic-differences or ask your own question.

12
Do Americans say "don't" as often as the British?
12
Do Americans say 'cheers' to mean 'thanks'?
29
Why do Americans add "The" in front of a team name, but the British do not?
34
When talking to American clients, should I say "smoothie" or "milkshake"?
24
"Closet" vs. "Wardrobe" Why is the first more common in the US?
2
Sentence structure:When should I put the noun in front of the verb?
3
BrE usage of "should have"
0
Is "know the drill" used in American English as well as UK English in a daily conversation?