How did 'flapper' evolve from a derogatory term into a cultural identity?

The word "flapper," in popular culture, is most often associated with young, progressive, unconventional women of the 1920's in the U.S.

According to both the OED and Green's Dictionary of Slang, the word "flapper" appears to have been in its earliest form a derogatory reference. In fact, the earliest meaning of the word with regard to young women was apparently "a teenage prostitute."

GDoS also offers an earlier definition related to prostitution. The citations appear to suggest that the earliest derogatory uses of the term were British.

Yet by at least 1920 (and apparently earlier), the term seemed to have evolved into a cultural identity embraced by the "flappers" themselves, referring to young adults as opposed to children.

According to Billie Melman's Women and the Popular Imagination in the Twenties: Flappers and Nymphs (1988), two early meanings arose around the same time, one referring generally to "sexually innocent youth," and another referring to very young prostitutes.

Around 1870 'flapper' acquired two novel meanings. It came to signify a female adolescent on the eve of her début in society, recognisable by the mane flapping down her back. The image this particular usage conveys is one of indecorous and sexually innocent youth...

At about the same time 'flapper' had come to signify a child prostitute - 'A very young girl trained to vice' (1899), 'a very young prostitute' (1893) - and, occasionally, the male sexual organ. The two usages, the one celebrating sexual innocense, the other vice and deviance, are closer than they first appear to be...

The simultaneous emergence of the two meanings reflects the ambivalent attitude of the Victorians towards feminine youth and sexuality... On the one hand, the image of the socially segregated girl was one of perfect purity and chastity, the ideal of desexualised womanhood. On the other hand, this very image epitomised illicit sexuality in one of its most sinister forms: a thriving trade in child prostitution...

After the First World War... it came to mean not so much an immoral young girl as, more characteristically, a disfranchised adult (i.e. a young woman past her twenty-first birthday).

Is it true that the early contradictory meanings mentioned by Melman arose simultaneously? If so, did the more well-known meaning referring to women of the 1920s in the U.S. derive from one or the other of these early meanings, and how did the change take place?

I think that flapper to refer to a prostitute was always only ever a minor, indirect or euphemistic use of the word.

Here are a few articles in Australian newspapers for 1903-17 which clearly use flapper to mean a fashionable, fun-loving young woman with no hint of prostitution. The term seems to be only mildly derogatory with an implication of shallowness.

To-morrow (Thursday) about 24 "flappers" are giving a dance at the Paddington Town Hall. The name, I may mention, that has surrounded this festivity hails from the fact that the youthful hostesses all still claim the charms of "hair down." Under 17 is, I believe, the age that marks the flapper and permits the maiden to skip and jump (should she so desire) without any sudden interference from Mrs. Grundy. Lucky flapper ! The dance in question promises to be delightful, and Rita's excitement at her being included — in spite of her looks resting peace fully on ton of her head — is quite cheerful to witness.

Nowadays a girl of twenty is considered only just grown up, and, in fact, has only just got over the indignity of being called a "flapper." and at thirty a man is absurdly young …

A 1915 article about a school pantomime says:

** PANTOMIME CHILDREN ATTEND SCHOOL** Mr. Win. Anderson's "Sinbad the Sailor" Pantomime Company has amongst its members four juveniles whose ages range from 12 to 14, and their State school education is not impaired. Mr. Fanning, the manager, has what might be termed travelling transfers for them and at each town visited he sees that they attend a school during their stay. Yesterday morning Mr. Fanning escorted them to the Flinders School. Most of the '"flappers'' who form the unusually joyous ballet are a year or two above school age.

** A SIMPLE FROCK FOR THE SCHOOL GIRL. -- PRETTY AND PRACTICAL** The flapper of the family will probably want, or at any rate insistently demand, a new frock of some sort or other for holiday wear. Now I would suggest that a really charming frock might be made at home for a very modest sum […]

A 1917 article titled “Women Magistrates” is more critical of flappers but clearly makes a distinction between them and prostitutes:

[...] Another charge, on which quite a number of young, girls are arrested weekly is that of soliciting. Here, I maintain, that a man is Incapable of judging; in nine cases out of 10. The policeman' sees a flapper go up to a Tommy and ask him. "What are you doing this evening?" He comes to the conclusion that she is accosting him for immoral reasons, and he acts as duty bids him. More often than, not he is wrong. You will find that tho temptation thrown on young women from the time they are flappers is enormous. They are light-hearted, asking for excitement; they are non-moral, and that is the result of the social conditions of the present day. They are determined to have a good time at all costs. And so the girl who may merely want to be taken, to a picture palace, or who may have succumbed to the glamor of khaki, is classed together with the professional loose woman. [...]

F. Scott Fitzgerald's first collection of short stories, Flappers and Philosophers, was published in 1920; the first story uses the word flapper in dialogue about the woman in the story.

”The flapper! She is growing old. She has come to none of the predicted ‘bad ends,’ but has gone at last, where all good flappers go — into the young married set, into boredom and gathering conventions and the pleasure of having children, having lent a while a splendor and courageousness and brightness to life, as all good flappers should.”

A Google Ngram for "flapper" references a couple of fashion magazines in the early 1920s (Harper's Bazaar and Women's Wear--Toronto) that use the term for frivolous young girls; there's also an earlier story, Saturday Evening Post, 1912 about an arrest of a "flapper," which seems to use the more pejorative meaning.

In the English Dialect Society's 1892 Glossary of Northumberland Words there is the definition:

FLAP an unstable person. A young giddy girl is called a flap, or a woman or girl who does not settle down to her domestic duties, but goes gadding about, and is generally one of slatternly habits

And similarly, the 1872 A Dictionary of Archaic and Provincial Words, Obsolete Phrases, Proverbs and Customs from the Fourteenth Century:

had the 4th definition of "flap" as:

On the other hand, from the 1884 Encyclopaedic Dictionary, the third meaning of flapper, is:

A young wild duck before it is able to fly

The 1893 Slang and Its Analogues has 7 definitions for "flapper"

The youth-meaning of "flapper" goes back at least to 1864, as there is section in The Wild-fowler: A Treatise on Ancient and Modern Wild-fowling titled "Flapper Shooting" which explains:

A " flapper" is a young wild-duck, in a state of immaturity, partly fledged, and consequently unable to soar in the air or to fly any great distance. It is very unsportsmanlike to go in quest of flappers ; and no wildfowl shooter, with any pretensions to a sportsman, will advocate the sport. It is a highly undignified proceeding to pursue them, young and helpless as they are...

So there seems to be an non-derogatory origin for the "youth" meaning of "flapper" from young ducks; but there is also a separate meaning originating from "flap" which is derogatory.

I have spent a certain amount of time in the past perusing period newspaper and magazine archives and have the following sense of what happened.

As others have said, "flapper" had the meaning in England in the late-1800s and early 1900s of a young woman.

An item from a fashion section of a newspaper in 1914 gives a sense of the word, as it was then understood:

""Flapper" is a word that has come into fashion in America during the last twelvemonth, though the term has been familiar in England for a generation. The "flapper" period of girlhood covers what is known here as the "awkward age" - that trying stretch between alluring little-girlhood and budding young-woman hood - the rapidly growing time between 10 and 14 years when arms and legs seeem disproportionately long, feet and hands are always in the way, the hair simply will not remain tidily and becomingly arranged . . . ."

I would dismiss all of the analysis of the "dual" nature of the word. I see it as having primariliy one meaning - young woman. Whether it was someone preparing for a debut or a loose young woman might change with the context or social circle of the speaker.

In the United States in 1910s, "flapper" had come to mean a young woman or older girl - generally about 14 years of age. In the mid-1910s, there was a fashion trend in which young society women wore clothing that was considered to make the women look young - like a "flapper." Flapper dresses of the 20s, for example, draped on a woman's frame in a generally slender, formless way.

An article about the fashions at the New York Horse Show of 1912 illustrates the early days of the "flapper" fashion trend:

"Distinctly the 1912 Horse Show girl is a Flapper, old ones and young ones - all strictly Flappers - boneless, absolutely whaleboneless, hipless, wastless, with shoulders so sloping that the big heavy stoles of fur toboggan off them and stop at the elbow. The muff droops heavily to within an inch of the floor, hanging from the left wrist. It is by no means a Highbrow Girl, this year's Horse Show exhibit, but there is a studio pose - a duples studio - about it. Where is the fat of yesteryear? The fat lady has gone." 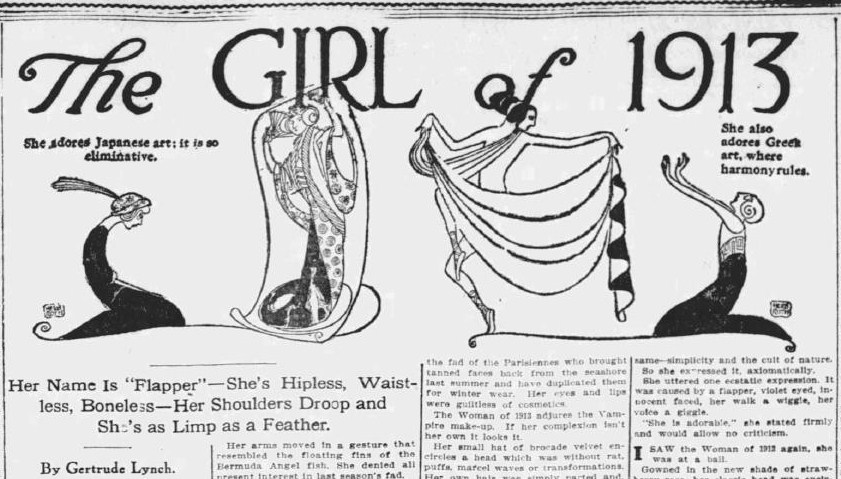 Silouhettes were slimmer, the bustle was gone, the bust was not enhanced, the corset was gone.

Towards the end of the decade, the women wearing those kinds of clothes adopted the term "flapper" to refer to themselves, and by the 1920s, the term was generally used to refer to modern, progressive young women.

A clothing advertisement for women's clothing from 1917 illustrates the youthful sense of "flapper" in fashion: 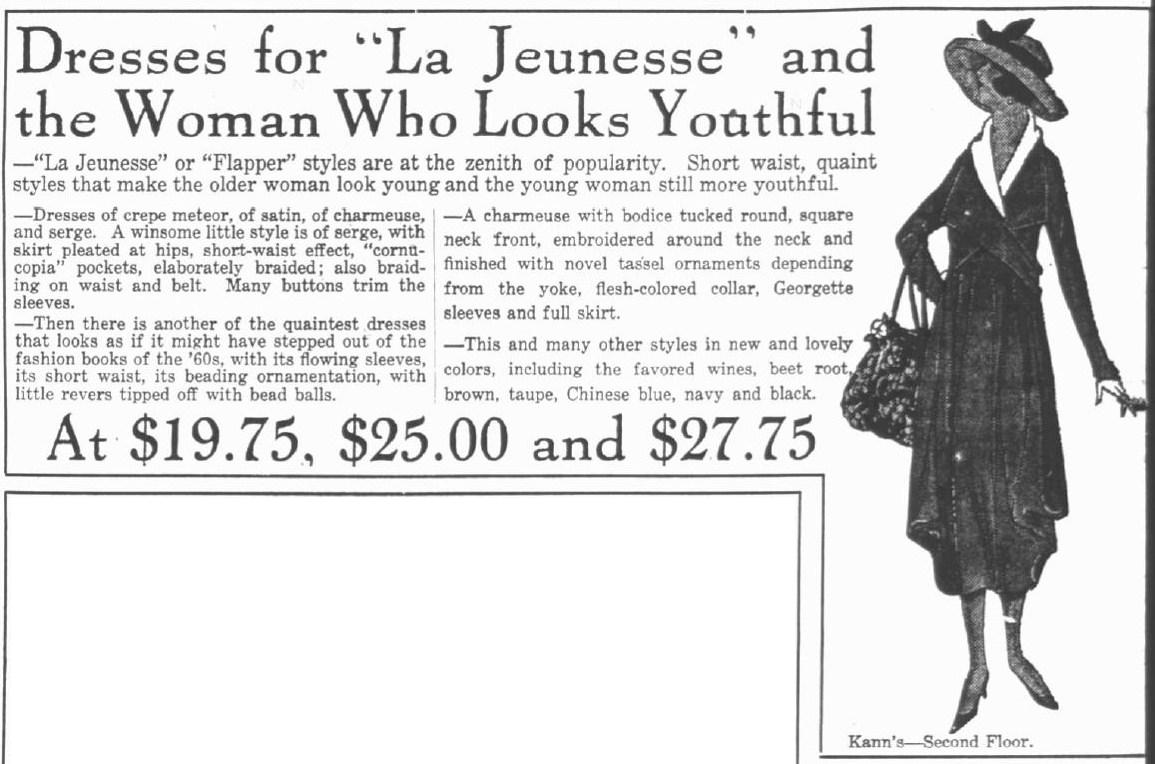 ""La Jeunesse" or "Flapper" styles are at the zenith of popularity. Short waist, quaint styles that make the older woman look young and the young woman still more youthful."

As for the origin of the term, I tend to believe that it could have been an analogy to a fledgling bird - just reaching the point where they flapped their wings and set off on their own. 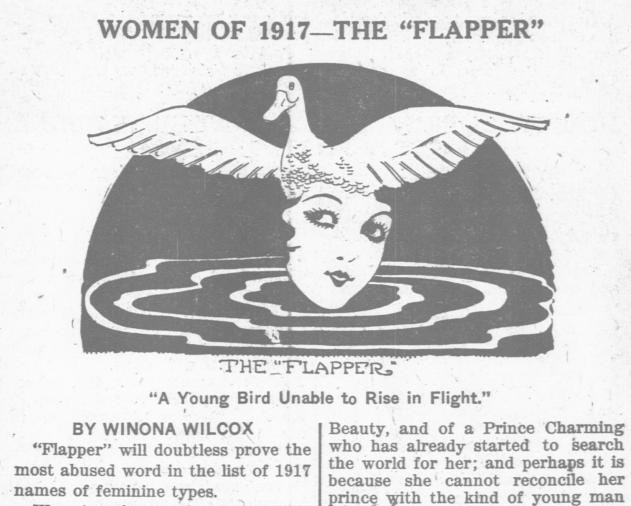 Not the answer you're looking for? Browse other questions tagged etymology pejorative-language historical-change or ask your own question.

6
How did 'pummel' evolve from the meaning of apple?
8
How did 'decree' evolve from 'to separate'?
4
How did 'ply' evolve into these 4 different definitions?
2
How did 'bump' humorously evolve into 'bumptious'?
3
"cathouse," "call house," and "sporting house" for "bordello"
6
Can we call it a dry spell?
4
Does the term "farm-to-table" as a contemporary food movement derive from early 20th century govt. programs?
3
About the AmE expression "pound the pavement"