I've realized I don't actually understand the difference between ɑ and ʌ completely.

for me, the ʌ is pretty much the short Hebrew Kamatz sound (Bet with kamatz - בָ).
To my impression, the ɑ sound is like the Long Kamatz sound but tainted with a little bit of Holam sound (Gimel with Holam - גֹ).

So, to my impression, the differences are:

Some guides online explain that the difference between ʌ and ɑ is the length only, they're both an "uh" sound.

It's a bit awkward to me, as the American pronunciation of "not" is not exactly "nʌʌt", but the vowel is a bit tainted with an "o" sound (but again, I maybe hear what I want to hear).

Hearing the both sounds in online dictionaries - well, for me, they're not the same. again, I might be hearing what I want to hear.

so, is ɑ sound simply a prolonged ʌ sound or aside length, they are different?

It's hard to answer this question for a few reasons:

Here's my best shot. Some of the following may be incorrect. Be aware that I am speaking from the perspective of someone with a Western US accent with the "cot-caught" merger: that is, I don't have /ɔ/ as a distinct sound in my speech, so in many words where I have /ɑ/, other speakers have /ɔ/.

In American English, phonetic vowel length is as far as I know not a very important factor in the differentiation of /ɑ/ and /ʌ/. The length of the vowels in "cud" and "cod" sound similar to me. "Cut" and "cot" have shorter vowels than "cud" and "cod" because the following consonant /t/ is voiceless. I'm not sure, the vowel in "cut" might be a bit shorter than the one in "cot", but it's nothing drastic.

There is definitely a difference in the quality of /ɑ/ and /ʌ/ in most accents. I think that the guides that you reference that say "the difference between ʌ and ɑ is the length only, they're both an "uh" sound" are incorrect. Nonetheless, the qualities are somewhat close to one another, and it's relatively common for non-native speakers to hear them as the same (or in some contexts, they may even sound close enough to be confused by native speakers: to me the vowels in "salt" /sɑlt/ and "consult" /kənˈsʌlt/ sound pretty similar).

As far as I can tell, there are two main ways in which /ɑ/ may have a different quality from /ʌ/, and some accents have one without the other:

I guess we could say that in the idealized "General American" accent, both of these qualities distinguish the two vowels.

However, depending on the accent, only on or the other of these may be true. For example, in an accent with the "Northern Cities Vowel Shift," the vowel /ɑ/ is fronted to central [ä] or even further forward, while the vowel /ʌ/ is often backed. In an accent like this, /ʌ/ is higher than /ɑ/, but not more central.

There seem to be some relevant charts in "How Can You Learn a Language that Isn't There?", by Dennis R. Preston, in English Pronunciation Models: A Changing Scene. I'll reproduce two of them here: 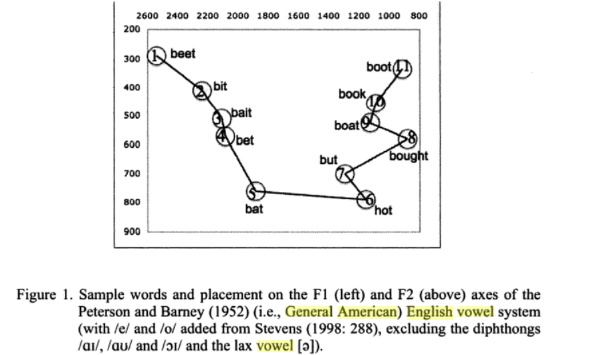 On the other hand, there are other accents where /ɑ/ is somewhat raised towards [ɔ] (I believe this is particularly common for speakers with the cot-caught merger), and accents where /ʌ/ is somewhat lowered towards [ɐ]. While I don't know of any American English accent where both of these changes occur to an extent such that /ʌ/ is phonetically lower than /ɑ/, it wouldn't particularly surprise me to learn that such an accent exists.

So I would recommend deciding on what accent of American English you want to learn, and seeking out audio in that accent for you to listen to.

If you really want specific advice about phonetics, I'd say the following. Since I definitely know of some accents where /ʌ/ is more "back" than /ɑ/, but I don't actually know of any accent where /ʌ/ is "lower" than /ɑ/, it's probably best to focus on vowel height as the distinguishing factor and aim to produce /ʌ/ as a central-ish non-low vowel: somewhere around the quality [ə] that you will have to be familiar with anyway to use for reduced vowels in unstressed syllables. Many (although not all) American English speakers identify the quality of /ʌ/ with that of /ə/, so this should be a fairly "safe" choice. This will probably be at least somewhat "higher" than Hebrew /a/. This is pretty much the advice Geoff Lindsey gives in his blog post "STRUT for Dummies".

2
Is /ɑ/ a back or central vowel in GA English?

4
Linking sounds?
9
Different pronunciations of "she's" depending on the meaning
5
American English Pronunciation of "o" sound long or short?
4
/i/ sound before "ng" and "nk"
1
Phonograms ey and ie
1
Some questions about IPA vowels
1
Fast forward inside a quotation to remove obsolete information?
2
Is there a hidden [y] vowel sound in /u:/?
4
B vs P pronunciation?
2
Does /ɛ/ have more than one sound?