What did “pop a cap” mean, other than “shoot someone,” in the 19th century?

Green's Dictionary of Slang defines "pop a cap" as:

to fire a weapon; to shoot someone.

In recent uses, the slang meaning is clear, and often extended to "pop a cap (in somebody's ass)." For example in this citation from 2000:

F.X. Toole Rope Burns 165: If some fool of whatever color was coming to kill him, he’d pop a cap in his ass in a heartbeat.

The two earliest attested dates provided in GDoS are 1865 and 1953. The 1953 citation clearly carries the same meaning, "to shoot someone."

‘Death Row’ in D. Wepman et al. Life 118: I popped four caps through his chest with my piece.

The 1865 citation, at first glance, seems to carry the same meaning:

in B.L. Ridley Battles and Sketches of the Army of Tennessee 454: My men halloo out: ‘Lie down, Mr. Govan, Mr. Bate is now gwine to pop a cap’.

Looking through early uses of "pop a cap," I found some strange instances that made me wonder if they actually are referring to something other than firing a gun, or shooting someone. These two stood out in particular. First, from 1874:

A son of Col. Thomas, a little fellow of about seven years, had gone over to the Institute, and while there was a boy of thirteen or fourteen years of age, who had a shot gun in his hands, pointed it at the little fellow and pulled the trigger. It was his intention to pop a cap at him, having no idea that the gun was loaded.

In this first example, the phrasing suggests that the shooter had not intended to actually fire a bullet, but rather only to "pop a cap at him."

After Dixie was played Governor Gordon was called for by the crowd and came forward to acknowledge the compliment. He said the gun was loaded for to-morrow, and he would not discharge it to-night. "Well, then, pop a cap," said a voice in the crowd. The Governor said it was already popped, and thanked them again for the serenade.

Once again, this text suggests that "popping a cap" is an alternative of sorts to shooting, or "discharging" a gun. Furthermore, the phrase "it was already popped," while possibly meant as a joke, seems to make the context even stranger.

In these early uses from the 19th century, including the early attestation provided in GDoS and the two example clippings above, what is meant by "pop a cap?" Does it still refer to firing a gun in all cases? Does it mean something different in the two cases mentioned above?

Finally, if "pop a cap" meant something else in the 19th century, how did it evolve into the 20th century meaning, referring simply to shooting somebody (or something)?

What is a cap anyways?

A "cap", in the firearms sense, is the ignition source for the gunpowder. These were used in the days before firearms that used "modern" cartridges containing bullet, powder, and (not obvious to the casual observer) a "cap" in the center of the cartridge base. 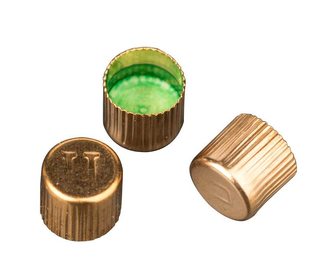 The pre-cartridge (but post-flintlock) "percussion cap" was a small cup-shaped bit of metal with a special sort of gunpowder packed into it. One placed this over a "nipple" (a sort of nozzle) on the firearm, then released the hammer. As the hammer hit the cap the powder inside would explode and blow flame through the nipple and into the powder chamber of the firearm.

These same caps were also used in "starter pistols" and the like to produce a miniature version of a gunshot sound, and they are the source of the term "cap gun" as known by kids of the 50s (though these used safer/cheaper paper "caps").

The references you have found refer to discharging a cap-style firearm with no powder in the chamber, so as to produce a sound without actually firing a bullet. The term "pop a cap" from there took on a figurative meaning, as modern cartridges took over and the original meaning of "cap" was lost to most firearm users.

(And, obviously, the origin of the term "cap" is based on its shape, and how it caps the end of the nipple.)

Drawing on the explanation in Hot Licks's answer and examining further uses of the phrase "pop a cap" in the early 20th century, a possible picture begins to form of the transition between the meanings.

We can call the description provided by Hot Licks "the earlier meaning."

discharging a cap-style firearm with no powder in the chamber, so as to produce a sound without actually firing a bullet.

And the meaning that involves firing a bullet might be called "the contemporary meaning."

In the early 20th century, there seems to have been a mixture of the two meanings. Often "pop a cap" was used in hunting terminology; At least, this context appeared to be common in searches of U.S. newspaper archives.

One notable aspect of many of these cases that use the contemporary meaning is that they are negated. In other words, there seem to be numerous cases where one says, "I didn't pop a cap," meaning I didn't shoot game. The negated meaning makes sense as an earlier version of the contemporary meaning because it ultimately applies to both meanings. "I didn't pop a cap," implying that one did not fire at a duck, for example, could mean "I didn't even take the first step toward shooting.

"He said the ducks were flying high and far off. He didn't pop a cap."

Another use appears to be similar, but it is followed by context that I don't claim to fully understand.

Meanwhile, the dove hunting season rolls on, and we haven't had a chance to pop a cap, or otherwise use that two-dollar-and-fifteen-cent piece of paper.

I can't tell what is meant by this piece of paper; Perhaps this is another slang expression of the time, or a meaning well-known in hunting circles.

Other instances of the negated use occur in military writing:

he and his lieutenant dragged a Marine gun up to the front and then didn't pop a cap.

My hypothesis is that over time, the phrase transitioned from the earlier meaning to the negated meaning that implies neither popping only a cap nor firing a weapon, eventually into use with the contemporary meaning non-negated, where it implies shooting a weapon.

Here is a source with a meaning not explicitly negated, but still referring to "pop a cap" as being a prerequisite of sorts to firing a weapon fully.

Because there was not a line in the story that even intimated the warships did as much as pop a cap.

Finally, here is an instance where the contemporary meaning is not negated at all.

Guns? They still have their uses, Hiner said, describing his plans to "pop a cap" Monday on the first day of dove season.

These selections were chosen to illustrate the hypothesis that the contemporary meaning grew in use out of the negated sense. I don't claim that the cited dates form any sort of boundary around which the earliest or most recent use of either sense caught on or faded away.

Given the range of interesting appearances of the phrase "pop a cap," there could certainly be a more thorough investigation into its evolving meaning and its various idiomatic uses. For instance, all the sources cited in this answer are from Texas, but as noted in the question and elsewhere, the earlier and contemporary senses of the phrase are not limited to Texas. Perhaps the phrase caught on in Texas culture from around the 1930s to '50s. Either way, there appears to be some overlap in the meanings of the phrase and a gradual evolution into the meaning we think of today, related to "shooting someone."

Not the answer you're looking for? Browse other questions tagged meaning etymology meaning-in-context slang or ask your own question.

1
What does “go pop” mean?
5
Could “old fashioned” mean “angry” or “disconsolate” in early 19th Century England?
10
“Bust a cap” meaning and derivation
2
What does “owes a great debt to the 19th century” mean?
1
Could the word “sister” mean “wife” in British English of the 19th century?
2
What was evergreen in the late 19th century?