Is this sentence from Orwell's Animal Farm grammatically sound?

Should been really have been included in the following passage from George Orwell’s Animal Farm, or was this somehow an erroneous insertion of a spurious word? 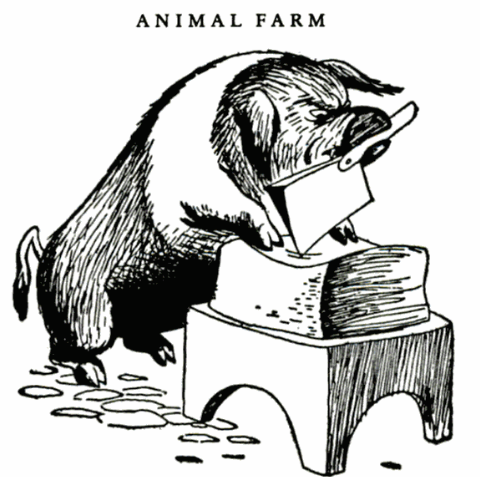 The harness-room at the end of the stables was broken open; the bits, the nose-rings, the dog-chains, the cruel knives with which Mr. Jones had been used to castrate the pigs and lambs, were all flung down the well.

I thought it should be one of these two alternatives:

But Orwell’s sentence seems to be a mix of my two rewritten portions.

I think the meaning of 'use' had set you on the wrong track, plus an assumption that English always was as it is now.

'To put to practical or effective use; to make use of, employ, esp. habitually.'

'To observe, practise, or engage in.'

IV. To accustom; to be accustomed to
20 (c) With to and infinitive. Now only in pass. in past tense, Now regional and rare.

example: J. S. Winter’ Bootle's Children xi. 86 Which..had stirred Terry's heart just as it had been used to stir it years and years ago.

(Some passive examples in the late 18th and 19th centuries show a transition towards sense 20c(b) 'With a gerund. To have come to expect a particular course of events to unfold' eg 'She was well used to entertaining herself.)

The sentence is correct for its time.

The quoted line had 'used to' as an adjective in the sense 'habituated'. As a modal auxiliary it is not used. The verb phrase is 'had been'. When 'used to' is a modal auxiliary, it means habitual action in the past and doesn't have verb conjugation except omission of infinitival 'to' after it. In this sense, your substitution is incorrect.

Not the answer you're looking for? Browse other questions tagged grammaticality syntactic-analysis gerund-vs-infinitive literary-english pied-piping or ask your own question.