What's this part of the nose called?

I’m having some confusion about the word nostril. I always thought it was it actual channel or cavity or opening in the nose. But some people seem to refer to the outside part of the nose (left and right) as nostril, the two “flaps” for lack of a better word. 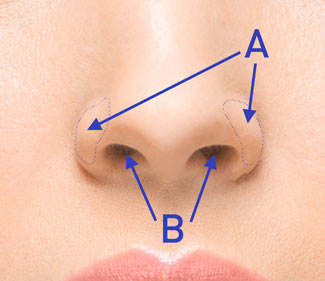 I’ve always called the B part nostrils, but I actually don’t know exactly what I would call the A part.

Another word that’s also associated with this is the nose’s vestibule, but as far as I can tell that also refers to the channel or opening, not to the outer or side part.

Who can shed some light on this? What are the right terms for the A part and the B as separate things?

It's called the nasal ala (adjectival form: alar - thanks @tchrist; plural: alae - thanks Deepak) or wing of the nose.

It refers to the wing-shaped structures that make up the walls of the nostrils. It is the lateral surface of the external nose that is also referred to by the name "Wing of the nose" or "Nasal ala."

The anatomical term is ala of nose: 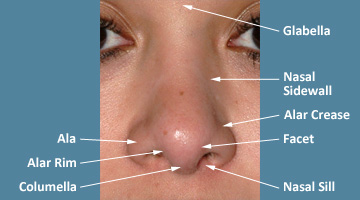 We Biologists refer to the nasal openings (present in birds and mammals) you have labelled B as the nares.

11
What is the name of the small containers of half & half, etc.?
4
What is the name of part of onion we peel?
24
Name for “having no concern about the truthfulness of one’s own remarks”
31
Phrase for a problem that resolves itself shortly after giving up
1
Is there a single English word meaning, “Deep, introspective happiness”?
1
Word for not recent but not too old
33
A word that refers to saying something in an attempt to anger or embarrass someone into doing something that they don’t want to do?
3
Is there a hypernym of 'inlet' and 'outlet' whose scope is limited to those two words?