What does drenched book mean?

The first printed page in the scanned online version of Analytical Solid Geometry by Shanti Narayan says, "the book was drenched". I'm positive it doesn't have anything to do with wetness. So what does it mean here? (There's nothing else written on the page. There are a couple of blank pages before and after this printed page.) 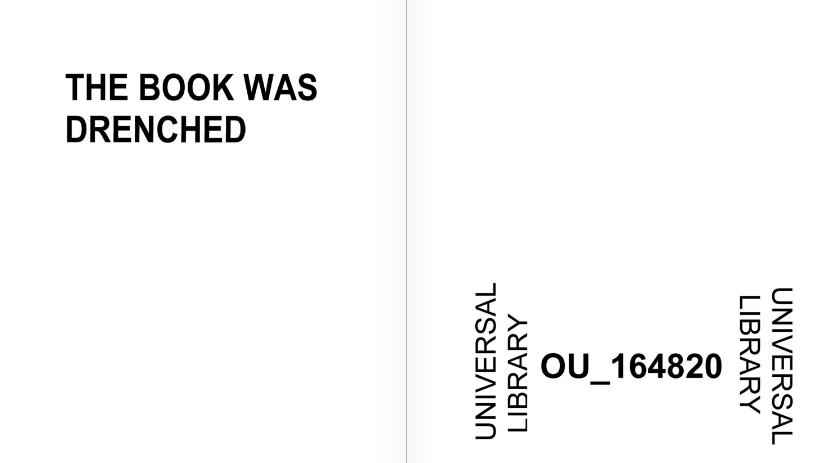 All the examples I've found are from Osmania University Library in Hyderabad. Could this be a term specific to Indian-English or a mistranslation from Hindi or another Indian language?

This is not an official source, but according to Charles Wm Dimmick on alt.folklore.urban Google Groups, the explanation is more plausible than that the book got wet.

It turns out that if I wait another few minutes the actual book is
there, but the "THIS BOOK IS DRENCHED" =A0is the first thing to appear.
Further research shows that this message shows up on about 40-50 books
which were digitized by Osmania University, and means that immediately
after digitizing the book they purged the physical book from their
collection.

Addition: Evidence that drenched means water damage: From Cyber Diary: Faceless Libraries in a Facebook Age, (Scroll down to Comment by Ananthanarayanan Vaidyanathan):

Recently the great Hindi Prachar Sabha Library at Madras...one of the biggest and greatest in India suffered due to the flood....We find that even in the digitized versions of many valuable books..that many pages are missing due to vandalism by borrowers or due to natural calamities like moth attack and drenching and so on. My heart sank when some very valuable books downloaded from sites like Osmania University contain the warning that the contents of the book are not complete due to missing pages, drenching, etc.....

That doesn't mean anything idiomatic in English as far as I am aware, my best guess is that it somehow indicates the program, user, or method that was used to scan/rip the book and upload the contents to archive.org.

For comparison, see this copy of War and Peace, which also contains a cryptic header at the top of its text file:

Whatever that means. I assure you, this is not a part of the original Tolstoy.

Here's another, The Bantu Speaking Tribes Of South Africa, that also begins with "THE BOOK WAS DRENCHED".

So no, it wasn't added by the author or publisher, it was added later sometime in the scanning/OCR/upload process. Just ignore it.

Maybe the book was retrenched.

I know it is not encouraged to be speculative at ELU, but because real facts are lacking, I may be allowed to take up the context of somebody's comment elsewhere, referenced in the answer by @ab2 here, that 'this book was drenched' has something to do with getting rid of the physical copy after the book is digitised, as in

this message shows up on about 40-50 books which were digitized (...) and means that immediately after digitizing the book they purged the physical book from their collection

and this part of the very next comment on the same page (in reply) by another user:

Well, library space costs money and they're getting smaller and smaller.

On this basis, and especially because the comment seems to refer to the library of an Indian university, I shall hypothesise that 'drenched' here could be an unintended phonetic misspelling of retrenched which is defined as follows by Merriam-Webster dictionary online:

The books were retrenched to curtail the expense of storing the physical copies:

This book was retrenched.

This type of spelling error can occur when the person writing it knows neither the word nor its spelling but is simply rendering a word heard spoken by somebody. If I or another Indian were to casually say 'retrenched', the 're' could be weak and there might be more emphasis on the second syllable (trenched), or maybe a lorry passed by outside with a heavy grinding of gears that obscured the 're' sound -- moreover some Indians tend to pronounce the 't' sound in the middle of words as a 'd' sound -- somebody else could easily hear and render it phonetically in writing as 'drenched.'

Of course that person would not know the word 'drenched' or its meaning either.

Head librarian says: when a book is scanned we need it to say on the first page, "the book was retrenched."

The assistant hears an unknown word and phonetically types out another unknown word: the book was drenched.

On the other hand, an early step in the recycling of paper is to soak it in water for a few days...

This book is going to be recycled. This book was drenched.

This is much less likely because Indian universities are bureaucratically very serious places without any sense of wit or humor. A University is a 'temple of learning' where students come to acquire Knowledge for a better life -- this is no place for subtle linguistic wit and riddles -- keep your humor outside the Library Door! So I leave you with Dante's immortal quote until we can get a more factual answer.

Important note to would-be editors of my answer: since I should prefer to be subtle once in a while, please do not find, copy and paste-in Dante's immortal quote referred to ironically here. Let interested readers follow the link and learn more.

The book was drenched My wild intellectual informed guess

Source https://science.howstuffworks.com/engineering/architecture/question321.htm Blueprinting is the older method, invented in 1842. The drawing to be copied, drawn on translucent paper, is placed against paper sensitized with a mixture of ferric ammonium citrate and potassium ferricyanide. The sensitized paper is then exposed to light. Where the areas of the sensitized paper are not obscured by the drawing, the light makes the two chemicals react to form blue. The exposed paper is then washed in water. This produces a negative image, with the drawing appearing in white against a dark blue background.

In earlier times before the invention of modern photocopying technique, some process like blueprinting might have been employed to copy a book. As it involves "washing in water" the term "drenching" might have been then in vogue in library circles

The word drenching a book has its origin much before modern scanning techniques were invented. Therefore it is highly unlikely that it refers to scanned or digitised.It more likely means copied. Copied through some proces involving "washing in water" and therefore "drenching"

Not the answer you're looking for? Browse other questions tagged meaning-in-context indian-english sentence-meaning or ask your own question.

426
Which word begins with "y" and looks like an axe in this picture?
42
What does “covfefe” exactly mean?
8
What is the English term for "unwittingly misspelling words based on their pronunciation?"
0
The meaning of "to a flutter of wings"