What is "lemonade" in American English?

Lemonade is a fizzy drink, strongly carbonated. It comes in two varieties, white (which is actually colourless) and red. I have never known anyone to make it at home.

Various things I've picked up in reading suggest that all three of the above sentences are untrue in American English, and the second sentence is untrue anywhere outside of Ireland.

Lemonade is not necessarily carbonated in Ireland. You can get the nice stuff here too. It's also not like we don't know how to mix lemon juice and sugar-water (protip: add one lime's juice and a sprig of mint), and haven't been doing so for centuries.

Conversely, the Americans have the fizzy stuff too.

Pink lemonade (both fizzy and non-fizzy) is found all over the world too. The brand I've seen most often in Ireland is French.

I agree that the deep red stuff seems to be much more common in Ireland than anywhere else, though its rarer here than it used to be. I haven't seen the brown variety in a long time, though I think C&C might still make it. I understand they were originally developed to be used as mixers with red ale (for a shandy) and whiskey respectively, so it may have been changes in tastes for alcoholic drinks that led to brown lemonade being rarer now.

In all, the word covers the fizzy and non-fizzy varieties of various different colours all over the world, but differences in preferences for the drink itself affect what will first come to mind when you hear it spoken.

In the U.S., lemonade is a drink made from lemons, sugar, and water. No carbonation. 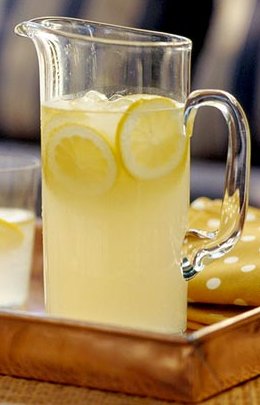 Pink lemonade is lemonade with red grape juice or grenadine mixed in: 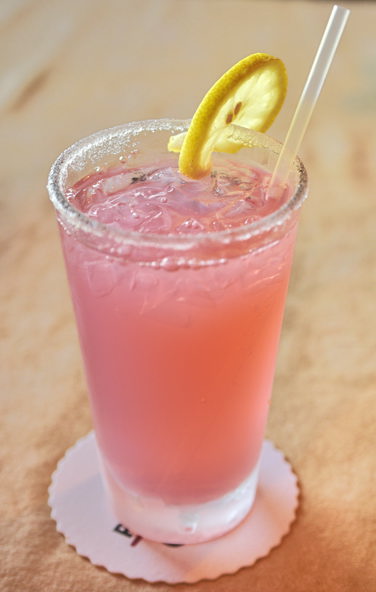 Macmillan Dictionary still says lemonade is 'a drink made from lemons, sugar, and water, or a glass of this drink'.

In American English the term

refers to the drink made with lemon juice (fresh squeezed preferred), flat water and lots of sugar, no alcohol at all, and no carbonation. If it is colored pink (with some red juice or coloring), you'd call it 'pink lemonade', which is not uncommon. A lemonade drink colored to the point of being red is unknown.

In AmE, if you have a lemon drink that is carbonated, you wouldn't have a word for it, except maybe by borrowing like the foreign brands 'Limonata'. If any carbonation is involved, the word lemonade would not be either.

based on the the term to differentiate alcoholic from non-alcoholic apple drink, 'hard cider' and 'apple cider' (the latter being non-alcoholic in general AmE).

A drink made of lemon-juice and water, sweetened with sugar.

then, in smaller type

In England now very commonly applied to ‘aerated lemonade’, which consists of water impregnated with carbonic acid with the addition of lemon-juice and sugar.

I was born and raised in Holland and grew up drinking a mix of water and a syrup resembling grenadine (though not necessarily red and available in a wide assortment of different fruit flavors). This mix was termed "limoenade", which interestingly enough would translate to "limeade" in English because "limoen" means "lime" while "citroen" means "lemon". I have family in the US and when I was young, I would visit them during the summer. My uncle once told me he was going to make me some lemonade, only to hand me a glass of the sour American version. I thought it was some sort of sick joke at the time.

Here is a link to a picture of a popular Dutch "limoenade" syrup brand and some of the different flavors they offer.

Lemonade in American is invariably something more like you would call lemon squash. It contains fresh squeezed lemons, sugar, and water, and nothing else at all. It's the ultimate WYSIWYG drink.

If there is carbonation it it, it is not lemonade. It is merely lemon pop, and not at all as interesting as the real thing. It probably has white grape juice and a million unpronounceable ingredients in it, too. That is not lemondate from our standpoint.

Not the answer you're looking for? Browse other questions tagged american-english vocabulary transatlantic-differences hiberno-english or ask your own question.