In British English, is it acceptable to address a professor as "Dear Professor X" when writing a formal or informal letter? Does it sound natural?

Why I am asking this question:

I was looking through the list of differences between the British and American editions of the first Harry Potter book by J.K.Rowling.

In the first chapter of both editions, a character named Hagrid keeps addressing Professor Dumbledore as

However, when Hagrid writes a letter to Dumbledore, the two editions use different forms of addressing:

Edit: Everywhere else in the U.K. edition, he is still "Professor Dumbledore". This letter seems to be the only exception. If he normally calls him "Professor", why he would write "Mr" in the letter?

Why "Mr" instead of "Professor"? Is "Dear Professor X" inappropriate in the U.K. for some reason? Or it just doesn't sound natural?

I think OP has the issue of "appropriateness" the wrong way round.

It's quite common in Britain not to address doctors and professors by that title. They're just plain "Mister", the same as the rest of us. I can't say exactly why - maybe we're a bit more egalitarian.

Clearly the change was made specifically for the US market, where I guess this usage is considered somehow "impolite" (disrespectful to either the office or the holder of the title).

I must admit I find it odd that such a change should be made to an English-language book in this way. But obviously the UK wording came first, so arguably the onus is on Americans to explain why they worry about such niceties (or why their book publishers think they might worry).

I think you may be barking up the wrong tree here. It is not a question of English vs American, or correct usage at all. It is simply part of the character. Hagrid, if given a choice, would always rather wield an umbrella than a pen: 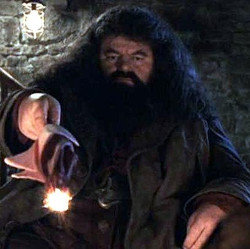 Rowling is intentionally having Hagrid make a mild social blunder indicating his lack of finesse. This is the first time we see the character and the way he phrases his letter serves to introduce him to the reader. I don't think anything else can be read into this.

In the US you address your GP as "Dr. X" and your teachers in school as Mr./Mrs./Ms. and in college they're Professors or Doctors. It's considered impolite to just say "Mr. X" when the person in question is a college professor or someone with their Doctorate.

Changing it in the books reflects the cultural norm of how to address a professor.

As a sidenote, it drives me nuts that the kids in Denmark call their teachers by his/her first name. I find it terribly impolite.

In the U.S., it is considered correct to use the address "Professor", but only in certain circumstances. You would only use the address "Professor" for someone who is a member of the faculty of a college or university (or retired). Further, I would say that you would only use it if you are addressing the faculty member in their capacity as a professor. That is, a bank teller wouldn't be expected to address a professor as "Professor" at the bank. But professors' students are generally expected to address their professors as "Professor" (or sometimes "Doctor"), even in nonacademic contexts, such as if they run into each other on campus. However, many professors tell their students to address them by their first name, and of course, once the issue has been discussed for a particular case, you do what the professor says.

I do know a number of college faculty members who are aghast at students who send them e-mails addressed to "Hey", so I would guess that many if not most college students these days have no idea what to call their professors. When I was in college 10 years ago I made certain to always address my professors as "Professor" (except for those who told me to call them by their first name), but I know many of my peers weren't sure what to call them.

In the UK (outside academia) the title doctor is almost exclusively reserved for medical doctors. Often, if someone who isn't a medical doctor refers to themselves as "Dr. Smith", people around them might think they were putting on airs and inform those new to the social circle that they aren't "a real doctor".

I think in Britain PhD's are more likely to use "John Smith, PhD" than "Dr. Smith", if they use anything at all.

Not the answer you're looking for? Browse other questions tagged word-usage american-english british-english letter-writing transatlantic-differences or ask your own question.

19
How should I address a professor in the US?
14
What does the phrase "Fee-fi-fo-fum" actually mean?