When did drowning men stop “catching at straws”?

Some sustain that the phrase “grasping at straws” has overtaken that of “clutching at straws”. I read that the former is American while the latter is British.

The American English definition is

while the British definition is slightly different

to be willing to try anything to improve a difficult or unsatisfactory situation, even if it has little chance of success

clutch (or grasp or catch) at straws
Be in such a desperate situation as to resort to even the most unlikely means of salvation.

The phrase is attributed to Sir Thomas More who used the metaphor in A Dialogue of Comfort Against Tribulation, 1534

A man in peril of drowning catchest whatsoever cometh next to hand... be it never so simple a stick.

“catch at every straw”

We do not as men redie to be drowned, catch at euery straw

The straw version was used throughout the 18th and 19th century, and both American and British writers (and speakers) continued to use the dramatic metaphor of a drowning man fighting for his life. The following citations are taken from the Early American Proverbs and Proverbial Phrases (1977)

I see the party are still willing (as drowning men) to catch at straws or firebrands.

This seems like a drowning Man catching at a Straw.

…like a drowning Man, willing to catch at a Straw.

The adage of “a drowning man's catching at straws.”

A drowning man will catch at a straw, the proverb well says

“The drowning man catches at the straw. With no disrespect for your judgment, and with no doubt of your sincerity, excuse my saying that I cling to the belief that there is yet hope that I am not condemned to perpetual exile from that lady's presence.”

The English novelist, Mrs. Henry Wood, in her 1863 The Shadow of Ashlydyat, used the metaphor to great effect

“I am engaged,” replied George, catching at the excuse like a drowning man catching at a straw. “That is” — taking out his watch — “I have not time now to see him. Tell Lord Averil I am particularly engaged.”

Did he think Lord Averil would never favour Prior's Ash with his presence again? It is hard to say what foolish thing he thought. A man, drowning by water, does catch at straws: and a man, drowning by evil fortunes, catches at fantasies equally frail and hopeless.

As can be seen above, American and British English both used the verb "catch" in the metaphor of a drowning man. But at some point in the late 19th century or early 20th century, the man stopped drowning, and the verb “catch” was replaced with “clutch” in the UK, while “grasp” was preferred in the US.

Related: What does "clutching at straws" mean?

OED suggests an evolving meaning of the word "catch." Particularly, we can zoom in on the sense related to catching an object in the air (sense 24).

To seize or intercept (anything) in its passing through the air, or in falling.

The sense's earliest attestation is from 1589, but it is still in common use today.

Compare this sense of the word catch with sense 23:

to catch at: to snatch at; to make a quick or eager attempt to lay hold of; often fig. (Also with indirect passive.)

"To catch at" in this sense seems to be the use that was originally applied to straws, prior to the split between "clutch" (BrE) and "grasp" (AmE). Unlike catching an object out of the air, which is still in modern use, the "catch at" sense is attested most recently in 1782. Though it's not marked as "obsolete" by OED, and the construction certainly persisted in the form of this expression, it seems to be antiquated.

Catching at his rein.

Judging by the antiquation of the "catching at" construction, it seems to make sense that the idiom would adjust in wording to adapt to the tongues of contemporary speakers. Searching for early uses of the various forms, I came upon several uses of the "catch" construction that use the word "grasp" to emphasize, and possibly to modernize or explain, the expression. This seems relevant to the eventual evolution to "grasping at straws."

And is it possible, that for such paltry and pitiful objects, you will culminate the Government of your country, and a great majority of your fellow-citizens?--It is possible--it is certain--drowning men, says the proverb catch at straws--a sinking party, says observation, grasps at every thing that affords a shadow of support.

In their despair, they caught at every straw--an awful grasp it was to them--it will not save them--the shadow of political death is coming upon them.

On the whole, the candid reader, will certainly be apt to think that the men who can make no better defences than those which have lately appeared in the court gazette, are in almost as bad a situation as this writer represents the authors... That they have not a plank left to stand on, that they are catching at straws, but that even those straws elude their grasp, and that they are sinking, never to rise.

The earliest direct use of "grasping at straws" that I could find was from around this period, in 1811, and placed the word "grasping" in italics, suggesting perhaps that the writer was aware of the unusual use of the word in a proverbial construction that usually used the word "caught," "catch," or "catching."

As to what he says respecting the meaning of the expression "Image of the son of God," and conformity to that image, it is really so weak, so fanciful, so far-fetched, so destitute of foundation, and so much like the graspings of a drowning man at a straw, that I feel no disposition to make a single remark on it. [Bold emphasis mine]

This explanation so far focuses only on the American structure, "grasping at straws," but I believe the combination of dating evidence in OED regarding the construction "to catch at," in combination with the appearance of "grasping at straws" decades after the latest attestation of "to catch at" suggests to me that the replacement of "catching" with "grasping" likely occurred to replace an antiquated construction. For whatever reason, "clutching" or "grasping" became more appropriate contemporary words for "attempting to hold on to something," while "catching" was increasingly associated with catching a ball (or anything in mid-air).

NGram searches, if we're to believe them, seem to confirm the suggestion that "clutch at straws" rose to greater prominence in British English, whereas "grasp at straws" flourished in the United States.

American English with "grasp at straws" ahead 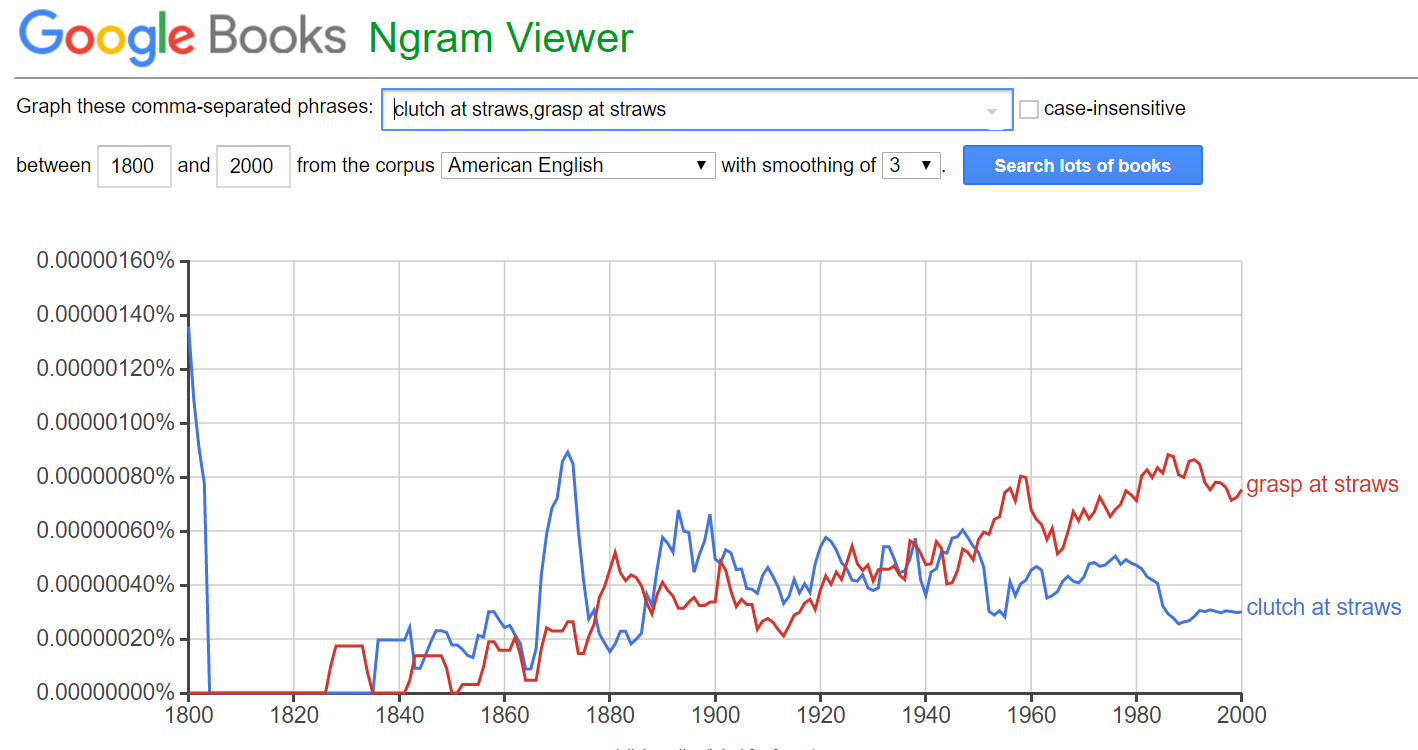 British English with "clutch at straws" narrowly ahead 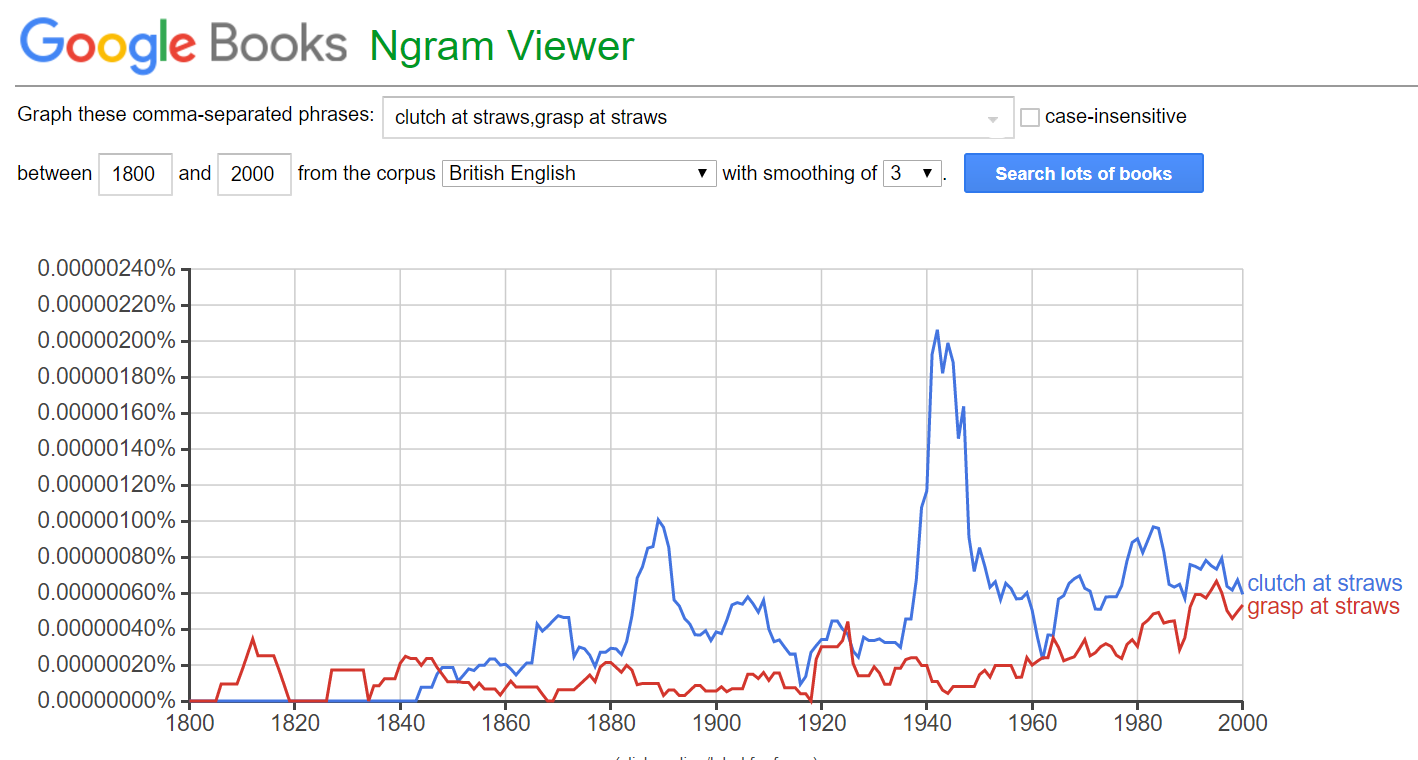 There could be many explanations for this difference, so I can only speculate. My best hypothesis is that the construction "clutch at" meaning " to make an eager effort to seize" might have been a uniquely British sense of the word "clutch" in the 19th century, around the time that "catch at" was fading out of use apart from the uses in this expression.

OED defines this as sense 6 of clutch.

To make a clutch at, to make an eager effort to seize.

It is attested in 1834, 1860, and 1868, all in British publications. Apart from OED's attestations of the "clutch at" construction in British sources, I can't find much evidence pointing to a correlation for the phrase "clutch at" without the full expression, "clutch at straws."

Still, perhaps this sense of "clutch" was in fact often used in BrE, and took over for "catch" in England while "grasp" took its place in the U.S.

An early example of the shortened version of the phrase, without reference to drowning, is in the 1674 Saints memorials, or, Words fitly spoken, like apples of gold in pictures of silver being a collection of divine sentences

Man hath lost his way, since he lost his eyes; poor man catcheth at every straw, grasps every trifle.

(interestingly, both "catcheth" and "grasp" are being used with the same meaning)

Also the 1704 A Collection of Voyages and Travels, at page xv:

But there is nothing solid in this argument, it is only catching at straws, when all history and practice of former ages make against it.

Also, beyond just leaving out the "drowning" aspect, there are examples of providing an alternative.

From the 1831 Particulars of an Overland Journey from London to Bombay there is:

Also, the November 1907 Lutheran Pioneer has an article Grasping at Straws that specifically describes grasping to prevent falling down an embankment.

Not the answer you're looking for? Browse other questions tagged meaning etymology american-english transatlantic-differences or ask your own question.

10
What does “clutching at straws” mean?
7
word or phrase for pursuing a losing argument in a certain manner

5
When did “y’all” become improper?
0
When did Americans begin to use “practice” instead of “practise”?
17
When did people start “boinking”?
2
What is “Broken Britain”?
50
When did men start to lose their “virginity”?
12
When did “for days” start meaning “marvellous”?
10
Origin of “dripping with [sarcasm]”
5
When did prodigies stop being evil?
13
The conflicting origin of a “piece of cake”
5
Origin of 'buck up', meaning “to become encouraged”… American or British?