What do you call the piece of paper given by a parking meter?

According to Longman dictionary (and also Oxford dictionary), a parking ticket is "an official notice fixed to a vehicle, saying that you have to pay money because you have parked your car in the wrong place or for too long".

I don't know what is the right word for the piece of paper you get from a parking meter. Can we call it a parking receipt or a parking permit?

"Receipt" is not correct then. The OED defines a receipt as:

A written or printed statement acknowledging that something has been paid for or that goods have been received.

That is not what you're looking for. Even if the "permission" also prints the details of a receipt, that does not make "receipt" a correct definition for "a piece of paper that gives permission".

Similarly, the invention of the spork has not made the words "fork" and "spoon" freely interchangeable. For the same reason that a fork is not the same as a spoon (even though sporks exist), a receipt is not a piece of paper that proves you have permission (even though both are sometimes printed on the same piece of paper).

When talking about a document that proves you have permission, I would instinctively call it a ticket:

A piece of paper or card that gives the holder a certain right, especially to enter a place, travel by public transport, or participate in an event.

However, we run into a problem here. "Ticket" is ambiguous, since it could also refer to a fine:

A certificate or warrant.
--> An official notice of a traffic offence.
‘the officer issued Rhodes a speeding ticket’

In the interest of avoiding misinterpretation, I would not use "parking ticket". While it is technically correct (through the definition of ticket), it will predominantly be understood to be a synonym for "parking fine".

An official document giving someone authorization to do something.

However, there is an ambiguity. There are two sorts of parking permits:

Again, we find ourselves with a contradiction. When you say "I have a parking permit", it is possible for people to understand that you have a long term permit which exempts you from having to have a short term parking permit.

Instinctively, I would have said that this is incorrect. Permission refers to the abstract concept of being allowed to do something, rather than the physical proof of permission.

However, the OED disagrees with me:

However, my argument seems weaker in this case (compared to the others). The distinction between the abstract concept and physical object can usually be derived from context, and can even be irrelevant in some cases.

I have a parking permission.

Technically, you have both. Because you have the physical document, you therefore also have the abstract concept.

I forgot to put the parking permission behind my windscreen.

This makes it obvious that you're talking about a tangible item, thus excluding the possibility of people inferring you mean the abstract concept.

Parking permission is a valid option. Out of all the listed options, it has the least chance of being misinterpreted.

In practice, I find usages of "ticket" but not "permission"

I've resorted to Googling, hoping to stumble on usage of the words. This is the best I could come up with. The system is called "Pay and Display". But when you read though it, you can see that "ticket" is the preferred word:

A pay and display machine is a type of ticket machine used for regulating parking in urban areas or in car parks. It relies on a customer purchasing a ticket from a machine and displaying the ticket on the dashboard, windscreen or passenger window of the vehicle. Details included on a printed ticket are generally the location and operator of the machine, expiry time, fee paid and time entered.

For a second, I though I had found an answer when I saw coupon parking mentioned. However, that doesn't fit your current scenario:

Coupon parking is a variation of pay and display without the use of machines; instead, the motorist purchases a booklet of coupons in advance from the authorities. To use a parking coupon, the motorist has to completely tear off tabs of the date and time, or scratch off panels on the date and time in which he/she leaves the vehicle.

Again, no luck in finding a word to use that does not create ambiguity.

You get to choose which one you use, in my opinion. There is no strictly defined answer here.

Parking permission seems to be the best choice from a semantical point of view. Out of all the presented options, it has the lowest chance of being considered too ambiguous.

Ticket is also a good choice, when you observe the practical usage based on what I have found. So it wouldn't be wrong to use "ticket".

However, I do want to urge you that you should still avoid using "parking ticket" (because people will assume you mean a parking fine); and that you should endeavour to make it clear from context that you are talking about a permission, not a fine.

There is a ticket on my windshield.

Many people will infer you mean a fine, most likely a parking fine. It is very ambiguous.

The parking meter did not give me a ticket.

The context makes it clear that you're not talking about a fine. This isn't ambiguous, due to the context you've used it in.

Certainly in British English a ticket in the context of parking is also a piece of paper stating how much parking you've paid for. The machine may also (especially if you pay by card) issue a receipt, on the same type of paper. 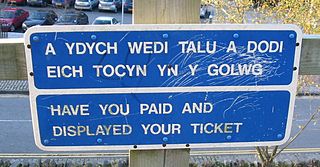 The meters round here also say "take ticket" on the screen when you've finished paying.

A parking permit would normally be issued to an individual by a business by arrangement (often without payment) rather than to a casual user. Such a permit might be open-ended or might be for a single day (especially if called a visitor's permit).