What does it exactly mean by the word patronize?

There is also a related word: condescending.

What I understand is,

But, I am confused about the following explanations, 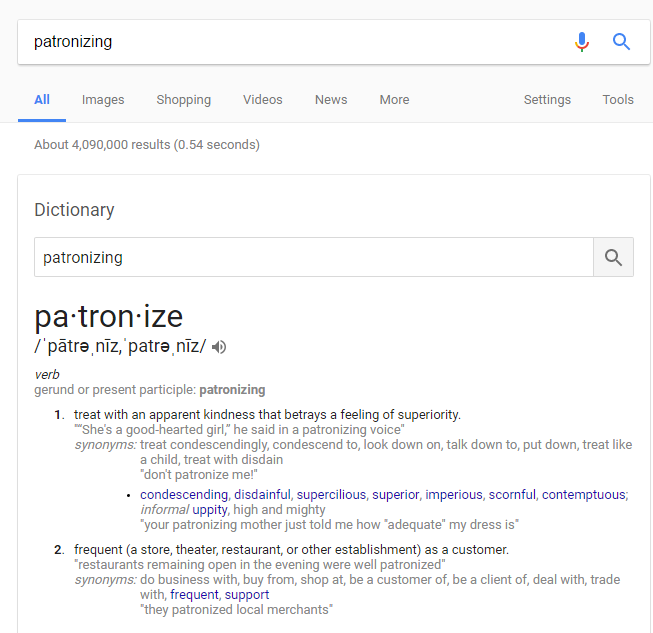 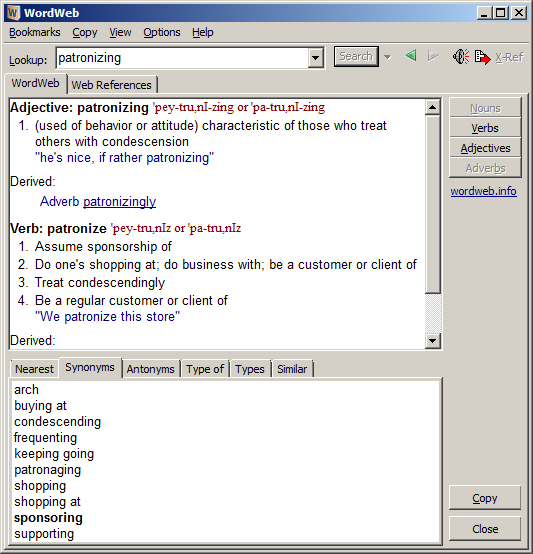 'Patronising' and 'condescending' essentially mean the same thing, i.e. acting like someone is beneath you and not as good as you. However they don't quite get the meaning of lowering yourself in the same way, and that's where the second sense of 'patronise' comes in.

The adjective 'patronising' is a cognate of the verb 'patronise' which needn't have negative connotations. 'Patronise' can simply mean a giving relation in which the person who is 'patronising' is the giver. This is a slightly outdated sense, hence the notion of a difference of social standing between the giver and the receiver. You might 'patronise' a shop, i.e. give the gift of your custom to the shop (particularly in the days where the 'patron' of the shop would have been of higher social standing than the shopkeeper). The Medicis were famous 'patrons' of the arts, i.e. they were of very high social standing and sponsored artists who otherwise would not have been able to work. 'Patronise' has a sense of benevolence in it, i.e. the person doing the patronising is of higher social standing but is being generous. For instance an answer to a question could be patronising because the person doing the answering gives the impression that they know more than the other person but are being kind by answering.

In contrast, 'condescending' is cognate with the verb 'condescend' which is to lower yourself. It doesn't have the giving relation and sense of benevolence that 'patronising' does. It simply means that the one person is better than the other. If you condescend to answer a question, you answer it knowing full well that the person asking it is not as good/as deserving as you are, sort of in a similar sense of coming down from the ivory tower for a bit. Historically, the usage could be non-pejorative (https://en.wiktionary.org/wiki/condescend gives a quote from Pride and Prejudice with a non-pejorative meaning). However, even in the non-pejorative sense of being friendly to someone of lower social standing, the sense of protection and sponsorship that is present with 'patronise' is absent.

The adjectives themselves basically have the same meaning now, but historically especially 'patronise' had this second meaning of fatherly benevolence/benevolent superiority.

This is related to the etymology of the word.

Pater means "father" in Latin (cfr "paternal" in English), and it is the root word used in "to patronize".

Given these etymological origins, it would be correct to describe "to patronize" as "to act like a father (parent)".
When you patronize someone, you're behaving in a way that paints yourself as wiser than the other person, while also making them feel safe and good about themselves, which means that you're treating the other person like a child (as if they're unable to partake in a mature discussion and are incapable of understand the actual truth).

This is similar to how parents respond to little children. They are not being told the truth, but rather an oversimplification that is more suited to their intellectual level.

When you patronize an adult, you talk to them like you would talk to a child. Not necessarily because you actually think that they are simpletons, but rather than you are trying to implicitly treat them like a simpleton. This allows you to implicitly call them a simpleton without explicitly saying that you think they are a simpleton.

At face value, all of these statements could be factually correct (the same is true for the other sentences that are spoken to a child). However, it is the context (what I put in parentheses), combined with the fact that you are clearly being facetious, that turns it into a patronizing statement.

It's possible to patronize someone intentionally (clearly using hyperbole) or to do it unintentionally (say something kind, which also carries the implication that the person is inferior, which you did not mean to imply)

"To condescend" means the same thing as "to patronize" (in this context). However, the etymological reason is different. You are condescending when you act like you're talking to someone who is inferior to you (= beneath you).

This also stems from Latin. "Condescendere" in Latin means "to (literally) let one's self down, stoop". In other words, you are "lowering yourself to the other person's level".

Also pay attention to the second meaning: to frequent. Like in being a frequenter at a bar you are patronizing the bar. Maybe one of the main supporters. Compare sponsor, fan, main customer. Someone who is very eager and active in supporting some business or organization can be called it's patreon.

That other (#1) meaning of patronize probably stems from someone thinking such a behaviour would be unsuitable, too personal relationship almost bordering pathetic. Like being a bit too eager to help it could look like you think the one getting helped would otherwise be helpless.

However it should be born in mind that this is only OED sense 5c of the word, and is of relatively recent currency.

The word patron goes back a very long way, and as someone has suggested is related to pater - father.

A review of some of the various OED senses of patron from the fourteenth century will clarify how patronising has come to be synonymous with condescending.

A person standing in a role of oversight, protection, or sponsorship to another.

†c. A founder of a religious order. Obs.

5.a. A person or organization that uses money or influence to advance the interests of a person, cause, art, etc.; spec. (in the 17th and 18th centuries) a well-known person who accepts the dedication of a book (obs.). In later use also: a distinguished person who holds an honorary position in a charity, foundation, etc. Also fig. Often, esp. in early use, connoting something of the superior relation of the wealthy or powerful Roman patron to his client (cf. sense 2b).

†b. A supporter, upholder, or advocate of a theory or doctrine. Obs.

c. A person who supports or frequents a business or other institution; a customer of a shop, restaurant, theatre, etc.

Many further senses including those involving slave masters, masters of ships etc are given thereafter.

Thus it is that in modern English, patronising has come to refer, as one dictionary puts it, to any attitude "of apparent kindness, which betrays an attitude of superiority".

2
“For one thing” — meaning in context
4
What is the difference between complacency and condescension?
4
“They were seduced” vs. “They were swayed”
2
What does the word “abjection” mean in this context?
3
Explain to me, please, yet another meaning of a word “stream”
5
what does “the rearing, reeling of silk” mean?
3
What does `who is but the form following the function of what` mean?
2
What does “mansplaining” mean?
3
forbid her anything and it became her desire