I'm looking for a word for a semi-open structure that is traditionally used for making braais (barbecue) in South Africa. The one I have in mind had a thatched roof, but I reckon that is not necessarily a rule. The building stood in the backyard. The building had one wall on each end, and the space where the other two walls should be was open. the building was of rectangular shape, but I don't think that mattered. I saw many like that when I was in Joburg and Parys. They referred to it with a particular name, but I cannot remember what that was. It was not shed, gazebo, lapa/lapha, rondavel, mokhoro, fale, cabana, chickee/chikee, Tiki hut (or any other kind of hut), palapa, pergola, ramada, barn , shelter,cottage or shack.

For a sample sentence: "Hey, should we have a braai (BBQ) in the *(missing word)".

It looked a bit like this (except that the thatch did not hang this low on the left side - on both sides the thatch was levelled like on the right side of this picture - and the walls on both ends were made of concrete). 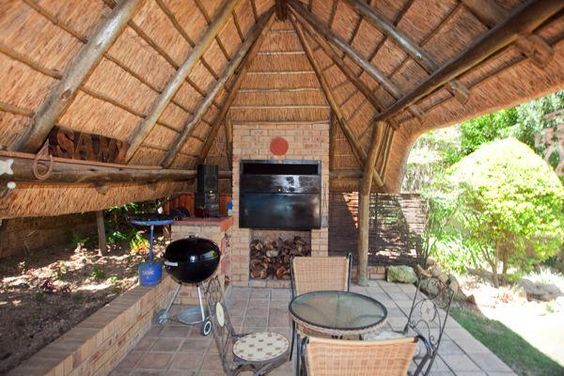 Is it possible you're looking for the word Lapa?

A courtyard or similar enclosure, especially the first of two courtyards in a traditional Sotho homestead

The word I was looking for was "boma", which actually means an enclosure for animals, but somehow came to mean a thatched structure used for dinners or entertainment in SA. Funnily enough, Google (images) does not seem to agree with that definition, as most of what I found doesn't look anything like the picture above. For this reason, in spite of finding the word I was looking for, I'll stick with 'lapa'. For those curious about the word "boma" (which in South Africa did look like the picture above), here are some references:

"Boma (bo-muh): This word is Bantu in origin, and traditionally referred to a wood-thatched structure used for holding livestock or provide protection. Also known by the Afrikaans name kraal, a boma is now used widely an an enclosure for dining or entertainment. If you stay at an upscale safari lodge, you’ll likely have a celebratory open-air dinner in a boma at some point." https://afktravel.com/57136/say-what-a-glossary-of-south-african-slang/

"boma (bow-mah) – noun – In South Africa, an open thatched structure used for dinners, entertainment and parties. Originally a form of log fortification used to keep livestock in or enemies out. First found in African explorer Henry Morton Stanley’s book How I found Livingstone (1871), the word is used across Africa and is of uncertain origin." https://www.sapeople.com/2014/07/02/south-african-english/

Not the answer you're looking for? Browse other questions tagged single-word-requests south-african-english or ask your own question.