Might the word “hushpuppy” be a corruption of a Native American word?

I have always doubted the traditional explanation of the origin of the word "hushpuppy" since the word sounds like a borrowing from a Native American language. The 'explanation' that it comes from someone frying up a dollop of cornbread batter to quiet the dogs sounds like folk etymology. 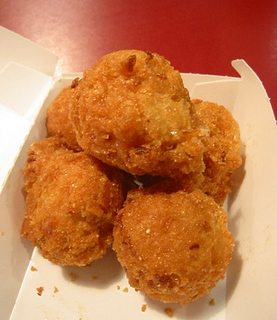 Are there any Native American linguists in this group who might shed some light on this subject?

Using Josh's link to Serious Eats in the comments as a source, here are some of the tasty tidbits.

The term "hushpuppy" is much older than the food and does not suggest a Native American origin:

As far back as the 18th century, the phrase was used as a term for silencing someone or covering something up. An 1738 account describes crooked British officials who, when ordered to board and search a vessel suspected of smuggling, "played the Game of Hush-Puppy," delaying several hours to listen to music in the captain's cabin before conducting their search, by which point the crew had hidden the contraband beneath the ship's ballast.

The food itself had previous names which eliminates the theory that it was created to silence dogs:

Southerners have been eating tasty balls of fried cornmeal batter for quite some time, though they didn't call them hushpuppies at first. At least two decades before "hushpuppy" appeared in print, South Carolinians were enjoying what they called "red horse bread." It wasn't red in color, and it had nothing to do with horses. Red horse was one of the common species of fish that were caught in South Carolina rivers and served at fish frys along the banks.

And it wasn't the first food that carried the name hushpuppy:

The word "hushpuppy" was actually applied to a different type of food before cornbread: gravy or pot liquor. An 1879 account in the San Antonio Herald describes a man named Jim Gillet of Lampass Springs, who covered his revolver holster with a human scalp. He had taken it as a trophy after he and a band of Texas Rangers killed eight Native Americans in "a short fight of Winchester rifles against wooden arrows." Some months later, Gillet was "bending over a frying pan at breakfast" when "he trailed the long hair into the 'hush puppy' gravy." He promptly tossed the scalp into the fire and burned it.

So no, there is no apparent link to Native American origins -- but the myth of keeping dogs silence does appear to be a false explanation based on the name of the food.

Not the answer you're looking for? Browse other questions tagged etymology american-english food or ask your own question.

14
Etymology of “medicine” and its Native American usage
2
Jewish American word for stuffed cabbage
4
'-gate' as a suffix to coin words related to scandals and corruption cases
30
What word can I use instead of “tomorrow” that is not connected with the idea of the rising sun?
25
The origins and usages of “waffle”
6
We might have to do some “fiddling”
77
Is it conceivable that President Obama might use the word “queue”?
6
What is the origin of the American expression “s*** fire”?
8
How did an egg and cheese dish come to be known as “Woodchuck(s)”?
2
What does word «zippo» means in American slang?