Is it true that a word ending in -y is more likely to be an adjective than a noun?

Claim: a word ending in -y is most likely not a noun but an adjective.

Don't have my tagged corpus handy to check. Anyone have the stats on Parts-Of-Speech of words ending in y and assuming they don't end in -ly?

I originally made a quick python script on the "Part of Speech Database" here, which is a combination WordNet and Moby. Then I modified it to run on the frequency list here, based on COCA.

This did not incorporate word frequencies, and I suspected they would boost the ranking somewhat, as many of the -y nonadjectives were quite rare (for example otolaryngology, noun). Thus I edited the program to tally instances of each word from a COCA-derived frequency list.

This leads to a frequency of 1632165/18057879 = 0.090385. Roughly 9% of words ending in -y but not -ly were adjectives. Surprisingly, this result was even smaller. I guess in the scheme of things "traditionally-suffixed" adjectives aren't really that common.

From the data I also found the converse question (does being an adjective generally imply a -y ending?). There were 28426173 total instances of adjectives and 2134139 adjectives ending in -y, including -ly. The result here was quite similar: 0.075077. Only about 3 out of every 40 adjectives have the "traditional" suffix.

The columns add up more than 100% because the same word can be accounted for in several rows. 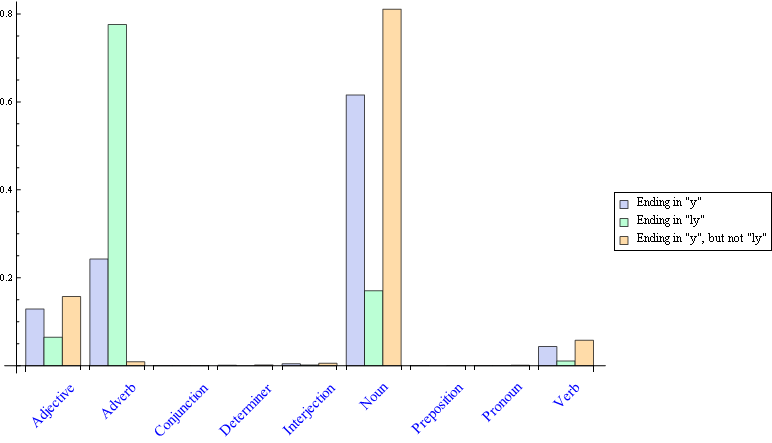 Just as a reference, I used the following scripts (only one shown, Mathematica code):