Now I observe you staring upward and puzzling your wits to guess what great bird it is you see wheeling aloft over our heads. That, Sir, is the type, symbol, and adopted emblem of our nation, the BALD EAGLE, who, by the way, is not bald, any more than that stout and sturdy youth, the thriving republic, whose character he represents; only his head and neck are white; so is his tail; the rest of his body is brown. — New England Magazine, Vol 1, 1831

[emphasis in bold mine] 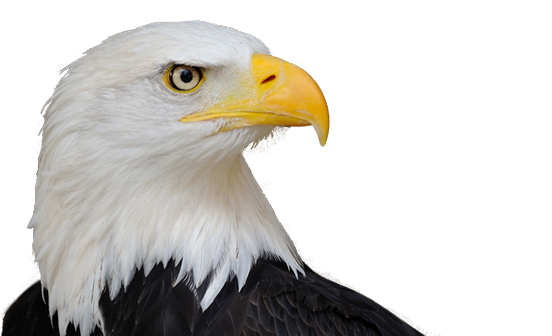 The Latin name for this iconic raptor is Haliaeetus leucocephalus, which means white-headed sea eagle. The Hali is Greek for “sea” and Aiētēs is “eagle”. Meanwhile, its species name is derived from leucos, “white” and cephalus which means “head”.

In 1782 the bald eagle was designated by Congress to represent the, then fledgling, United States. It is a fine and majestic-looking predatory bird but its head is amply covered with snow-white feathers: to put it bluntly, it is not bald. On the other hand, the immature bald eagle has a mixture of brown and white feathers until its fourth or fifth year of life when the distinctive solid-white head and white tail fully appear.

Etymonline says bald, meaning the lack of hair, is from the 14th century but its origin is uncertain, it suggests that it could have been derived from Celtic bal meaning “white patch, blaze”.
A Middle English Dictionary (Oxford, 1891) suggests that bald comes from the Old English for ball: beal, beall, dating back to c. 1200.

I also read that the raptor's name was taken from piebald (source), a word that first appeared in 1590 according to Merriam-Webster and means patches of black and white. Oxford Dictionaries states that pie recalls the magpie's black-and-white plumage, and bald (in the obsolete sense ‘streaked with white’).

So now I am quite confused. What do I tell my 12-year-old Italian student on Monday when he comes back for his lesson and point-blank refuses to believe that the bald eagle is bald? Can't say I blame him.

The earliest attested spelling of the word bald seems to be balled, as you have noticed. According to the Oxford English Dictionary (OED), "Middle English balled" is "of uncertain origin".

However, the use of "bald" to describe animals that have white streaks/spots/markings is attested well before the specific term "bald eagle". So it seems quite plausible that the bald eagle was simply named this because it was bald, as in, marked with white on its head. However, it is probably also not a coincidence that this white head resembles a hairless (bald) human head.

The OED gives it as the fifth definition:

with the following examples:

The American Heritage Dictionary (AHD) gives it as the fourth sense:

Zoology Having white feathers or markings on the head, as in some birds or mammals

So I would say, just tell your student that it is a specialized/obsolete use of "bald" that most speakers are not familar with.

This sense of bald also seems to be the origin of the word piebald (which occurs in one of the OED examples above). The AHD entry for piebald says:

PIE2 [as in "magpie") + Early Modern English bald, marked or streaked with white.

Thus, bald eagle and the word piebald seem to be indirectly related. However, neither the OED nor the AHD seems to be in favor of describing "bald eagle" as having been directly derived from "piebald" (an etymology that Michael Seifert mentioned in a comment); i.e., I can't find any evidence that people used to call this animal a name like "piebald eagle" and then that was later shortened to "bald eagle".

Two etymologies that have been suggested for this sense of bald

The origin of bald in this sense seems especially unclear. It might be derived from the noun ball, which apparently doesn't have an attested cognate/ancestor in Old English but which seems to have cognates in some other Germanic languages. The OED says "ball" is

However, as you note, several sources suggest bald in the particular meaning "having white spots/streaks/a white spot/a white streak" is instead related to, or in some way also associated with Welsh "bal":

Compare Welsh ceffyl bàl a horse with a white streak or mark on the face (French cheval belle-face), where bàl may be an adjective, or a noun construed as a genitive.

Sense 4 ["Zoology Having white feathers or markings on the head, as in some birds or mammals"] perhaps partly of Celtic origin; akin to Welsh bal, having a white streak on the forehead (of horses), Irish ball, spot, mark, and English blaze, white mark on the face of an animal; see BLAZE2.

Which is identical in form with, but treated as a distinct root from

‌‌ bhel-2 To blow, swell; with derivatives referring to various round objects and to the notion of tumescent masculinity.

OED unequivocally derives the first morpheme in “bald eagle” (or “bald-eagle”) from the ordinary sense of bald as “Having no hair on some part of the head where it would naturally grow; hairless.”

In the entry for the bird, the following two extracts lead the shortish list:

1694 Philos. Trans. 1693 (Royal Soc.) 17 989 The Second is the Bald Eagle, for the Body and part of the Neck being of a dark brown, the upper part of the Neck and Head is covered with a white sort of Down, whereby it looks very bald, whence it is so named.

Count this slander upon Migizi among the many misnomers that we gichi-mookomaanag visited upon the creatures of Turtle Island, starting of course with Indians for Anishinaabeg and also including wild rice for manoomin.

And yes, “R. Frame” should definitely keep his day job—versification clearly is not his forte.

Even 18th-century authors could not agree on why the bald eagle is so called.

From The Natural History of North-Carolina, printed in 1737

The Bald Eagle is the largest, and is so called, because his Head to the middle of the Neck is covered with a white sort of downy Feathers, whereby it looks very bald, and the Tail is as white as Snow, the rest of the Body being of a dark brown colour.

But in 1774 the British authors of The Beauties of Nature and Art Displayed in a Tour Through the World, claimed

In Virginia, Mr. Clayton informs us, there are three sorts of eagles; the largest of which they call the grey eagle, being much of the colour of our kite or glead: the second is the bald eagle, so called because the body and part of the neck and head are only covered with a whitish sort of down; and the third is the black eagle, much resembling those of our own island

Not the answer you're looking for? Browse other questions tagged etymology american-english animals clipping or ask your own question.

2
How did 'patriate' develop to mean 'transfer ... from a mother country to its former dependency'?
2
When did dogs start "wagging" their tails?
15
What is the origin of "rat"?
30
Where on Earth is "penguin" from?
6
What are the pronunciation and etymology of the dog's name "Tige"?
23
What word did Middle English have in place of “light" as in: “light blue”, “light green” etc.?
2
History and growth of "Snowflake"
16
How did the informant bird become a "little bird?"
2
How did “dial back” come to mean “to reduce pressure on sth”
2
Confusion surrounding etymology of 'Burdock'