Two people holding fingers (not hands), one leading the other

Is there a word or phrase to describe the act of taking someone by a finger or a few fingers, but not the whole hand, to lead them somewhere/to show them something? It's an intimate and sometimes seductive gesture and not necessarily the same, in my opinion, as taking someone by the hand. Here is an example: 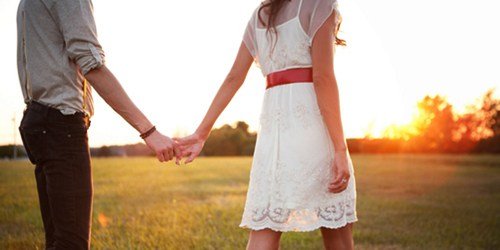 This is often described as linking fingers.1 Fingers that are joined this way are connected similarly to the links of a chain. For example:

She linked fingers with Conrad and tugged him toward the side of the house.
(Catherine Mann, All or Nothing, 2013)

The daters were always touching. If they didn't hold hands, they linked fingers or massaged a knee or volunteered small kisses for no reason.
(Chris Keniston, Just one Kiss, 2015)

Louis chuckled, linking his finger with his boyfriends'.
("Sing me to sleep", tryingtotell.tumblr post)

You're right that it can be an affectionate or romantic gesture, as you can probably tell from the quotes. But note that it can also be applied to any time that fingers are crooked (crookt, not crookèd) and then joined together, so occasionally it is used to describe a fuller hand-clasp or one's own interlaced fingers.

1 See Oxford Dictionaries' definition, linked above, especially v. 1.3. Note that this usage of "linking" is not restricted to fingers; it is at least as common to link arms, but that is a somewhat friendlier, less-intimate gesture.

I really don't think there's a word for that. . . I would probably just say "Held her hand by the fingers" or something like that.

Not the answer you're looking for? Browse other questions tagged gestures or ask your own question.