Are there any style guides that dictate the use of "on/at Amazon" (and other web platforms). If so, what are they and what's the reasoning behind it?

I've been doing some really basic copywriting for various books that I've seen on various reading lists and I occasionally refer readers to Amazon. Here's a simple example:

You can get a good audio version of it over on Amazon.

I've been going through my copy and proofreading it, and for some reason, the notion that using "at Amazon" is not correct and "on Amazon" is correct has entered my mind. Midway through this process of changing "at" to "on," I got to wondering if any style guides dictate which one is preferable and whether or not this applies to other media platforms (e.g., Twitter, Facebook, ...). I want to be consistent on this, and to be truthful neither one or the other sounds better to me, but I once heard a news broadcaster correct himself on television. It was Brett Baier and he seemed to be applying some sort of prescribed, dictated usage one time when he emphasized "on Twitter." He may have even added "not at Twitter." (It was a while back and I don't remember his precise choice of words or word order, but that's a good gist of what I heard.) It sounded as if he had been corrected by someone and was now applying what he had learned. I remembered this as I was going through my copy and changing all instances of "at Amazon" to "on Amazon." All of this made me curious, so I took some time to run a few combinations through Google's Ngram Viewer as well as Google's search engine. The images below show you what I discovered: 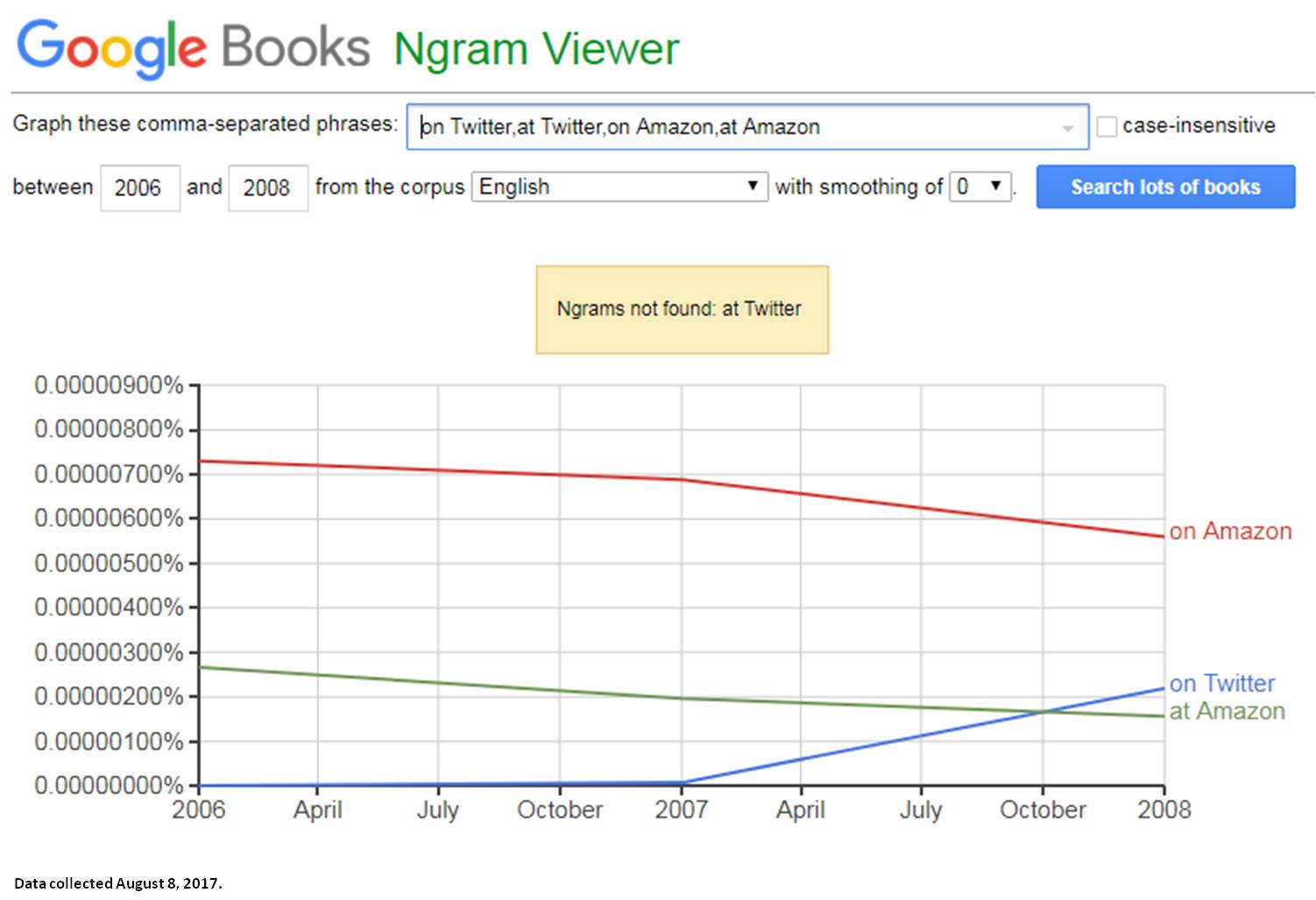 In the charts below, the columns indicate the number of times more prevalent "on" is over "at" (although there is one exception and I comment on that). 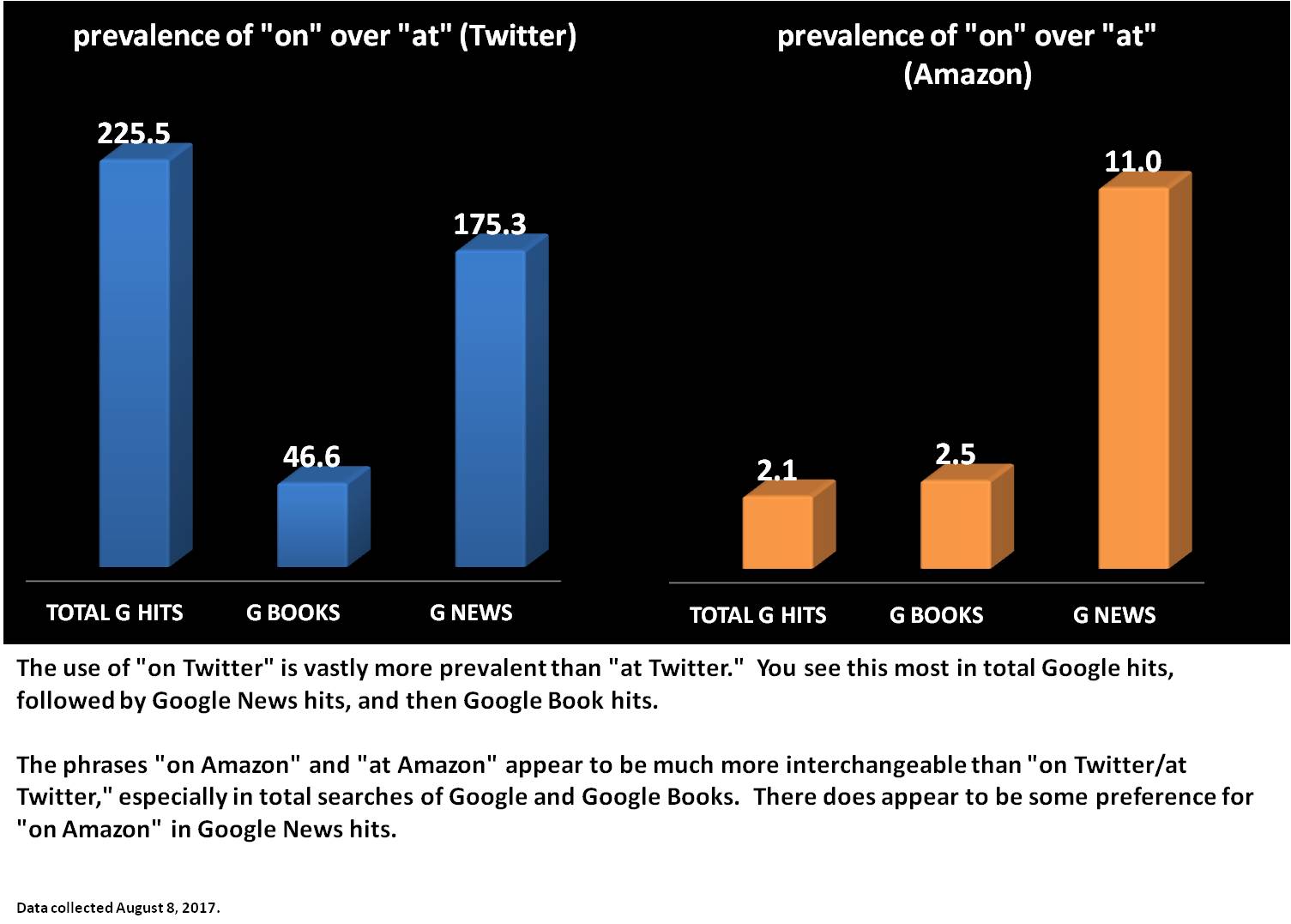 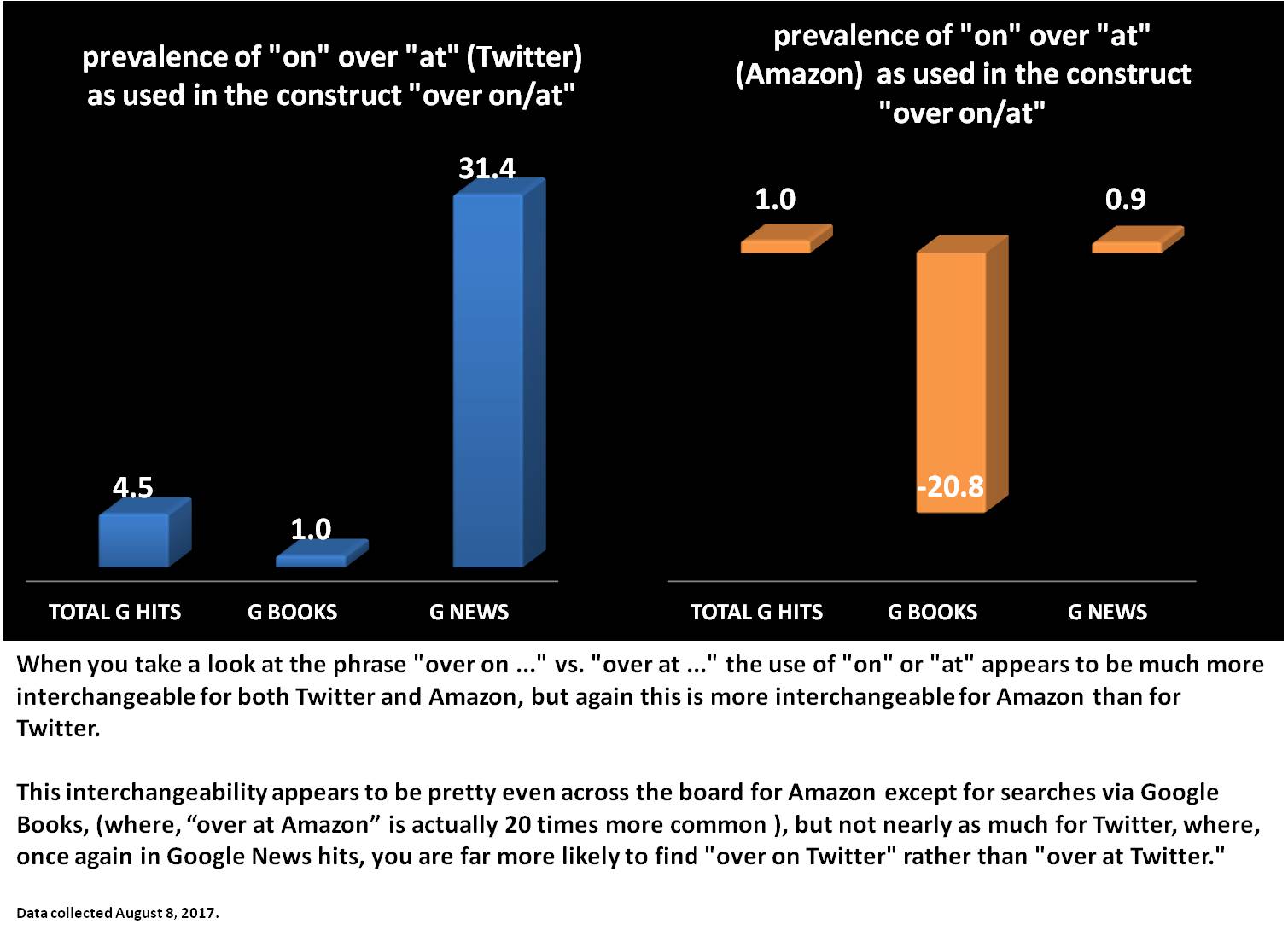 This then makes sense why "over on Amazon" and "over at Amazon" sound equally as good to me ... they are being used virtually interchangeably and, in fact, "over at Amazon" may actually be more prevalent in some registers.

Anyone reading this may have come to the conclusion that I've answered my own question, but really what I am looking for is some sort of style guide that dictates the usage of one over the other. If I have some sort of authoritative guide that dictates one over the other, I will continue the somewhat tedious task of swapping out "at" for "on." Now knowing that at least informally, there appears to be some amount of interchangeability, to continue doing this without any formal guide prescribing one over the others seems rather silly, unnecessary, and unproductive. From the disparities of "on" over "at" via news searches, I have to assume that there must me some sort of proscription going on. Anyone happen to know?

This might be cleared up by using the terms in their less-used constructs and seeing how they sit with you.

Internet-based businesses, particularly e-commerce sites, have always been referred to using "on", just as you would use "on the internet" and never "at the internet". Businesses that have both an internet presence as well as brick-and-mortar outlets can be differentiated by the use of "at" for the physical store and "on" for the internet site. Ie., "You can get that at Best Buy" vs "you can get that on Best Buy". The listener immediately intuits that the former is the physical store and the latter is the online store. I suppose the use of "at" can get muddled at times, but "on" always refers to something online. You wouldn't say "hey, let's go get it on Best Buy" and then drive to a Best Buy. That would be confusing to whoever you happened to be with at the time. Use of "at" to refer to something online calls into question the speaker's astuteness and reeks of noobie-osity. It reminds me of former Late Late Show host Craig Ferguson when he often asked his guests (tongue in cheek) if they were "on the Twitter" - they would give a little deer-in-the-headlights look because they couldn't tell if he was seriously saying it that way or just toying with them. (It was just a part of his shtick.)

I might seem to be making more of this than really matters, even to me, but I know that it's just one of those things that makes my ears twitch - just a tiny bit. Just sayin'...

Amazon is a unique case, I believe, since Amazon is both an "at" and an "on". If you are referring to Amazon's retail sales at www.amazon.com, then either would work, however, if you refer to AWS, then "on" would be more common.

Not the answer you're looking for? Browse other questions tagged usage phrase-usage style-manuals social-media journalism or ask your own question.