I'm wondering where the phrase originates.

(idiomatic, somewhat dated, Britain, New England)
A rebuke especially directed towards children for having referred to a woman as "she", instead of using her name or an appropriately respectful title.

From grammarphobia.com, etc., can see it goes back to at least 1897 but I'm having problems finding the origin.

I see various discussions on Yahoo, Word Origins but so far nothing authorative.

Here are the OED’s citations for such reprimands, which date from the late 19th century:

EDIT.
One 100% unsubstantiated theory I read was she was short for she-cat, so particularly unsuitable for referring to female elders within earshot, but who knows if this has any truth!

Not the first use, but rather the first use I can find in print of "cat's mother" is this from a play produced at the Globe Theatre in 1870:

Later evidence strongly suggests the origin is a folk phrase commonly (but not always; see the note from "A. J. M.") used as an reproof or correction for children. For example, this excerpt from Notes & Queries of May 25, 1878 (source of the first OED attestation of the phrase): 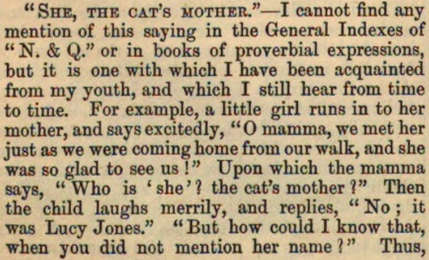 Bede's note provoked a series of responses in Notes & Queries. Among the responses were these: 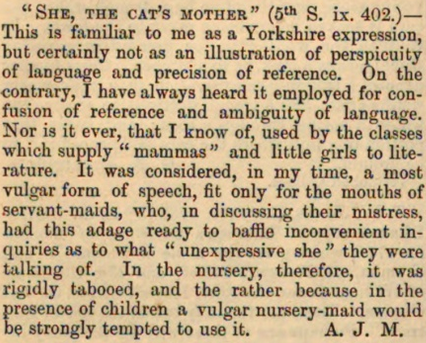 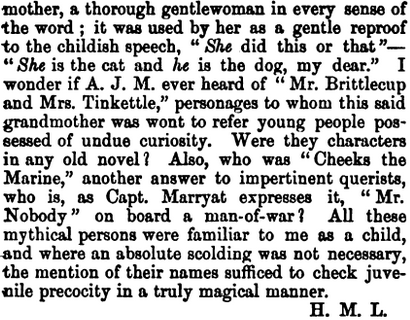 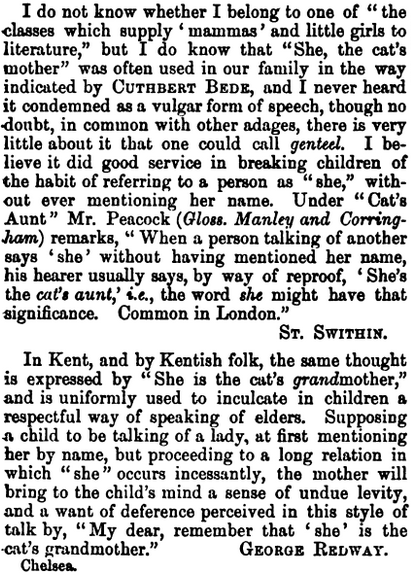 Searches for "cat's aunt", "cat's grandmother" and "cat's father" were not especially productive, although a finding of "cat's aunt" in the 1877 A glossary of words used in the wapentakes of Manley and Corringham, Lincolnshire (Peacock, Edward; as mentioned in the foregoing series of responses from Notes & Queries of July 27, 1878) did serve to reinforce that the use of the phrase, and its variants, was widespread in England in the mid-1800s:

Cat's Aunt. When a person talking of another says 'she' without having mentioned her name, his hearer usually says, by way of reproof, 'She's the cat's aunt;' i.e. the word she might have that significance. Common in London.

Similarly, another publication for the English Dialect Society, the 1894 Folk Phrases of Four Counties (Glouc., Staff., Warw., Worc.) sourced this to Warwickshire:

Her's the cat's mother. Warw. Said to one who uses the possessive her of the third person instead of the nominative she.

So, the grammatical complaint registered by the "cat's mother" phrase extended beyond the bald she to the use of her in place of she.

I think the following extract from Wordwizard gives a good suggestion on the popular origin of the expression. The origin appears to be from the second part of the 19th century as suggested here:

It probably come from common saying used to reprimand children whenever they addressed adult people in a disrespectful way:

Share
Improve this answer
answered Jul 28 '17 at 17:07
user66974user66974
3
Add a comment  |
Highly active question. Earn 10 reputation (not counting the association bonus) in order to answer this question. The reputation requirement helps protect this question from spam and non-answer activity.

14
When is it appropriate or disrespectful to refer to someone as "she"?

6
Origins of the word "mother"
18
Where's 'in-law' in mother-in-law from?
11
History of the phrase "for Mother Russia"
6
"Be mother" - Etymology and usage
1
Understanding "Mother of God!" or "Holy Mother of God!"
8
"Never slap a man who's chewing tobacco"
4
Etymology of "Mother Nature" and "Father Time"
20
Why is a tie in Tic-Tac-Toe called a "Cat's Game?"
7
Knees up, Mother Brown