Word to describe action of an audio indicator

Wondering if there is a good word to fit the following:

I read an instruction that mentioned an indicator but they were referring to a speaker and not a light and it felt clumsy.

I am wondering if there is a word like indicator, which has a feeling of visual sense, that would be more appropriate for auditory signalling.

I am hoping that to replace the word indicate with something else in an instruction manual that would let the reader presume the ready state signal is from an audio source rather than a light source. The word sound seems old fashioned and would have matched OK with bells and buzzers of yesteryear that were often collectively referred to as sounders but would not make as much sense in the contemporary world of ear-buds, mini speakers and tiny buzzers and beepers on modern electronics. The word signal seems like a possible alternative to indicate but it does not strongly suggest audio, it could be referring to a flag that pops up so not ideal either.

The speaker or beeper will sound when activated.

If the alarm sounds, leave the building immediately.

He sounds (= speaks) just like someone I used to work with.

Sounding the car's horn, she drove at high speed through the crowded streets.

to cause a noise to be made or say or shout a message to warn people about something:

Quick, sound the alarm - there's a fire in the machine room! 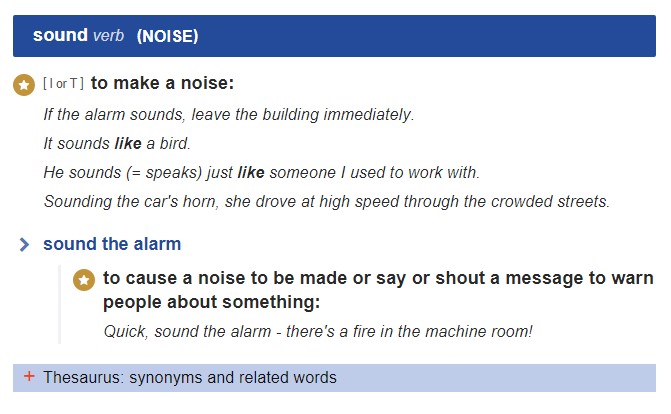 IMOO the word signal has a better "ring" to it, compared to indicate.

A few other definitions from dictionary.com are shown below.

In the simplest case, you could say: "The device will chime when ready."

2) to act as a resonator; exhibit resonance.

4) to amplify vocal sound by the sympathetic vibration of air in certain cavities and bony structures.

MOO: Last one... does not have any association with any other indication other than sound... Less “archaic sounding” than Resound.

If not... slap that indicator into IoT and have it text a message to your smart phone.

Speaker or buzzer would fit. Claxton or alarm would also work.

2) to make an echoing sound, or sound loudly, as a metallic object: A gong resounded.

2) to give forth or utter loudly.