Where does "tin ear" come from

Inspired by my own answer to How would deafening as punishment be carried out? at worldbuilding.se, I was thinking about the phrase "tin ear", meaning tone deaf, or (Collins) an inability to perceive differences in musical sounds. Merriam-Webster has a deafened or insensitive ear, which doesn't fit their example (My wife is a talented musician, but I have a tin ear) very well.

We've discussed the meaning before but not the etymology. There's some speculation at that last link about ear trumpets, and more here. Dictionary.com has a few historical records, but I can't find anything definitive.

So: Where does tin ear come from? Speculation I've seen includes:

The earliest record I can track of the use in print is in the novel Titan:A Romance, by Jean Paul Richter, published in translation from the German in 1863 and in the original language between 1800 and 1803.

Several sections of the text refer to a gentleman's frustration at the loss of his ear trumpet:

'"My ear, madam," he continued, "cannot be found again at all among the domestics; I have that to tell you." For he had today posted himself upon a law-giving Sinai, and thundered into the ears of the service assembled at its foot the inquiry after his own ear, "because I must believe," he had said to them, "that you, for very good reasons, have stolen it from me."

'He saw through all, heard all, though they had his away his ear-trumpet.'

the saga continues later in the book

'her astonishment can be compared with the greater astonishment of her husband, who happened to have been screwing in in the third chamber his tin ear, -made by Schropp of Magdeburg,- in order to listen to the servants, and who now caught a number of things. Nevertheless, the double-ear, with the broad meshes of its nocturnal lark-net, had only fished up from Augusti's low, whispering, courtly lips single, long, proper names, -such as Roqairol and Zesara.' Hardly had the soft spoken Lector gone out, when he stepped gayly into the chamber, with his ear in his hand and demanded of her a report of the reports.

First he inquired,- for he had been listening in vain,- in a very exasperated manner, of the Minister's lady, where she had stowed away his ear (it was the tin duplicate ear, wherein, as in a Venetian' lion's-head, all mysteries and accusations of the whole service and family met);...'

From this it seems clear that the American translator, Charles Timothy Brooks, was comfortable with the idea that his readers would understand the varied references 'tin ear' to refer to the same device as 'ear'and ear-trumpet'. I have no german so I'm not able to go to the original text to see what liberties may or may not have been taken with the translation in that regard. If anyone else can compare texts I'd be happy to hear and incorporate the results.

Seeing @RaceYouAnytime's answer, I thought it might be worth exploring whether it is the case that while 'tin ears' were ear trumpets, not all ear trumpets were 'tin ears'.

It is quite easy to picture the very obvious ear trumpets which we have all seen in cartoons and comedies, but there were also designs for small, discreet devices and the more money you had the fancier they could be.

Bernard Becker Medical Library Image Gallery: This delicate hearing device is molded of silver and gold plated and was molded to fit each individual user. It is lightweight (only 0.8 ounces) and can stay in the ear unsupported. The 2-3/8 x 3/4 inch opening is covered by a decorative filigree grill. The outer face of the device is a carved shell shape. Though designed to be barely visible when worn, this piece is beautifully crafted. 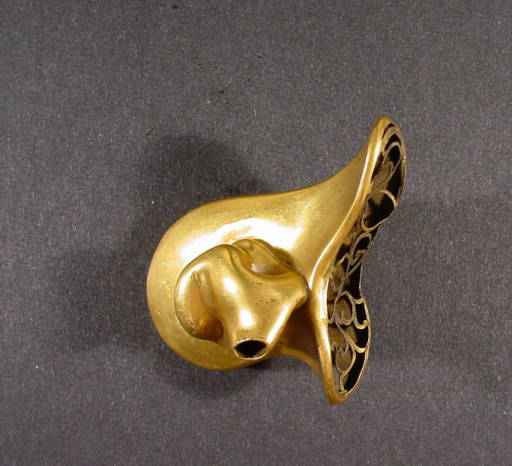 This device called an Otophone, was designed to make the wearer's ear stick out and dates from 1860.

This small curved silver device was designed to make the ear protrude slightly to facilitate the collection of sound waves. 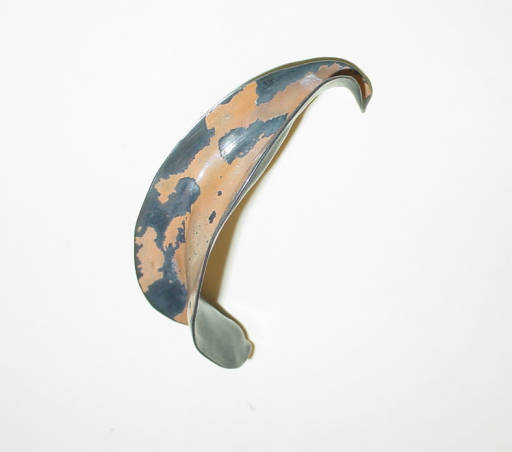 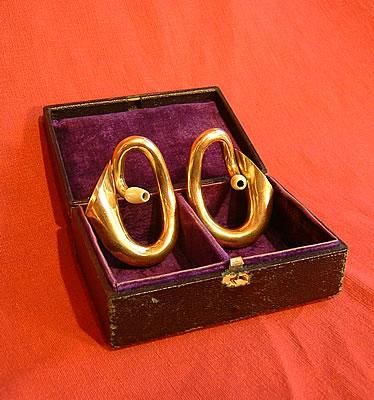 All of these are devices are 'worn in', rather than 'held to' the ear and I would speculate that it could be something of this nature which people were thinking of when giving the alternative name 'tin ear' to a cauliflower ear, particularly when considering the Titan reference to screwing in the device..

It appears to come from your first suggestion

I give some excerpts in support of this etymology: First, from the magazine Mixer and Server (1915), an excerpt that makes it clear that having a tin ear means being hard of hearing:

If that fellow working at the trade across the street, whom you have been trying to secure as a member of your local union, and who seems to listen but seldom makes comment on anything said to him, is given closer inspection, it may disclose that he has a tin ear, and that you will have to offer him something in the shape of reading matter to gain his attention.

Second, showing that tin ear meant ear trumpet, a 1915 article in American Playwright titled The Tin Ear in the Drama and Elsewhere. This article talks about Thomas Edison's invention of the audiophone, an early hearing aid, and complains about this invention not being available to the public. In these excerpt, you can see that tin ear means an ear trumpet, and a man with a tin ear is somebody who uses an ear trumpet, i.e. somebody who is hard of hearing.

When the audiphone was first announced the old reliable tin ear-trumpet was laid away ...

Perhaps the wizard [Mr. Edison, the "wizard of Menlo Park"] doesn't understand the disadvantages under which a man with a tin ear labors, and we have seriously undertaken to let him know. We are, moreover, tired of addressing the entire human race when we talk into a tin ear, and it is humiliating to be supposed by the person addressed to be talking about the crops, when you are discussing the doctrine of the transmigration of souls.

OED first attests "tin ear" in the sense of musical impairment in 1935.

A player has a ‘tin ear’ when his intonation is poor and his playing is mechanical.

I found three senses of "tin-ear" in the period shortly prior to this attestation. The most frequent by far seemed to be "tin ear" meaning a boxer's damaged ear from fighting, similar to "cauliflower ear." 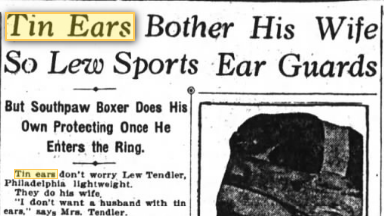 I would suggest that the frequency with which "tin ear" meant one damaged by pugilism means it likely played a role in the later meaning related to musical deficiency.

About eight out of every ten fist fighters you see nowadays own the "cauliflower," or "tin" ear; an ear so battered and punched by the bludgeonings of five-ounce gloves that it isn't really an ear any more at all, but just a misshapen chunk of cartilage clinging to the side of the head.

It's worth noting that having "tin ears" in the boxing sense generally implied a hearing deficiency as a medical result of the constant bettering. A headline in 1915 reads out:

Matt Wells in America, Talks War and Sports As They Affect England

Expects to Resume Boxing, Being Ineligible for Army on Account of Faulty Hearing, Due to His "Tin Ears" [emphasis mine]

A 1935 article jokingly attributes "tin ear" to a husband's propensity not to listen.

There are times when every man seems to have what is popularly known as a "tin ear"--especially every married man. In fact, a man's auditory nerve is almost as miraculous as his memory, which can be turned off or on at will, like a radio.

My reason for linking the musical deficiency version of "tin ear" with the boxing meaning is that they both have a connotation of damage and are looked down upon as an impairment. Furthermore, "tin ears" as in hearing aids are not the cause of deafness or hearing loss, but the fix for it. Having tin ears as a boxer is a physical burden brought upon themselves. I think that the sense in which it was used to describe the ears of boxers more easily translates to the sense related to lacking musical proficiency than does the hearing-aid etymology.