Was Zink ever valid spelling for Zinc?

On the Genealogy & Family History Stack Exchange I asked What might 'pitt Zink' in 1873 South Australian diary mean? and the first answer I received more or less aligns with my thinking that Zink is being used where today we would (in Australia) write Zinc. The writer was living in South Australia, but prior to emigrating had been a school master in Staffordshire, England for at least the period 1821-1827.

Was Zink ever considered to be a valid spelling of Zinc and, if so, when might it have ceased to be used?

According to Oxford English Dictionary, the answer is yes. Zinke was the earliest attested spelling of the word, with zink also preceding zinc.

The earliest attested use of the word is from 1651.

Any sulphurous, and imperfect metall, as Iron, Copper, or Zinke.

The spelling you suggested is believed from 1734.

We took six Ounces of Copper, and melting it in a Wind-Furnance, added to it an Ounce of Zink.

And finally, the earliest attested spelling with a 'c' is from 1813

Zinc is one of the most combustible of the common metals.

You ask: When might it have ceased to be used?

OED indicates that zink was used into the 1800's, in its remarks on the forms of the word:

However, jlovegren proved that some uses from the 1900's can be found. I would add to that these snippets from 1906 and 1914, respectively. However, the dates provided by OED are probably an accurate measure of when each form was in common use. 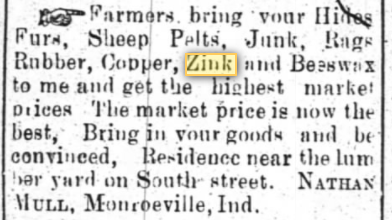 You can find the spelling in print sometimes, though obviously it's not standard. May be influence from German, Dutch, Danish, etc.

And this from an 1822 work, A Critical Pronouncing Dictionary, and Expositor of the English Language....

Not the answer you're looking for? Browse other questions tagged british-english orthography australian-english nineteenth-century-english or ask your own question.

6
Why did Australian English change from spelling words like 'honor' to 'honour'?
14
Is "imbedded" a valid spelling of the word "embedded"?
1
Was "nowadays" ever spelled with hyphens?
2
What non-alphabetic characters are valid in English spelling?
3
How homogeneous was Old English spelling?
3
How can enforce and reinforce have slightly different spelling and still be valid?
2
Is "swap" an accepted alternate spelling for "swab" in Australian English?
4
Why did the "-re" spelling persist in the British spelling of some words?