What made the usage of the figurative meaning of "resilience" popular?

According to the Oxford Living Dictionary the meanings of resilience are:

According to Ngram the term usage took off especially from the'80s and is now commonly used in every context, from finance to psychology. Its original meaning appears to refer to a specific quality of materials:

•What is the context in which the term was originally used? Was is a typically used in chemistry or physics for instance?

The word was originally used in physics.

Whether there bee any such Resilience in Eccho's, (that is, whether a Man shall heare better, if he stand aside the Body Repercussing, than if he stand where he speaketh, or anywhere in a right Line betweene;) may be tried.

However, the verb form, resile, is older as explained in the New York Times article ON LANGUAGE; WHEN YOU SAY THAT, RESILE (1983):

Resile turns out to be an old word, chiefly in Scottish use, from the Latin resilire , ''to leap back.'' First recorded use was in 1529, in the state papers of Henry VIII, when King Henry said of one of his wives that he wished she ''wold herafter resile and goo back from that.'' In the old days, if the Queen failed to resile when she was told, she lost her head.

•When did its figurative meaning start to become common, was is from the '80s as Google Books appear to suggest? But mainly, what contributed to its usage outside scientific fields?

An early figurative use of "resilience" is in a US House of Representatives anti-slavery speech by Horace Mann, 28 February 1851:

Base as human nature often proves itself to be, it sometimes manifests a divine resilience by which it springs with recuperative energy from its guilty fall.

And an earlier use is in Edwin the Fair: An Historical Drama (1842):

This soul of man, this elemental crasis,
Completed, should present the universe
Abounding in all kinds ; and unto all
One law is common,— that their act and reach
Stretched to the farthest is resilient ever,
And in resilience hath its plenary force

As suggested in the etymology provided in the question, OED offers that "resilience" and "resiliency" first meant a physical tendency to rebound or recoil, which borrows directly from the Latin etymons resilientia; resilient-, and resiliēns. Around the same time, but attested later, the words had a similar meaning related to elasticity. In these literal cases, the meaning is describing the traits of a physical material or substance.

1676 The resiliency of the Quick-silver against the top of the Tube.

1712 Resiliency..is said to consist in the Minuteness of the Pores of the recoiling Body; that is, upon the Bending, for Instance, a Plate, or Lamina of Steel, the small Meatus's are contracted on the Concave part, and enlarg'd on the Convex.

From the meaning related to elasticity, the field of medicine seemed to adopt the term to refer to "resilience" of organs or tissues, by which it refers to their ability to elastically adjust shape and resume form, and eventually to recover from injury.

1788 The resiliency and energy of the vessels are not supported even by their former degree of distension.

1822 The natural elasticity or resilience of the lungs.

To this elasticity of the lungs, alternating with the irritability of the diaphragm, Dr. C. ascribes respiration, or the faculty of breathing; the capacity of the chest being by their means successively enlarged and diminished, and thus air alternately expelled and inhaled. He thinks, also, with great probability, that the movements of the heart and the circulation of the blood are powerfully influenced by the same resiliency.

From the heart and lungs to the spirit (spiritual resilience)

With reference to your second question, I would posit that the expansion of "resilience" into common figurative usage involved, to some extent, this medicinal use of "resilience" over time being applied to the "spirit" of an individual or entity, as in resilience of spirit or spiritual resilience.

An early figurative attestation from OED mentions "the resilience and the elasticity of spirit."

1893 The resilience and the elasticity of spirit which I had even ten years ago.

However, it is worth noting for the record that the earliest figurative use cited by OED does not explicitly mention spirit:

1857 In their struggles with the ponderous power of England [the Scotch] discovered an invincible vigour, not only of resistance, but of resilience.

Both OED and the newspaper archives suggest that "resiliency" preceded resilience with regard to a figurative meaning. OED provides this figurative definition of "resiliency."

The earliest attested use in this sense is from 1839 and refers directly to spirit.

1839 Mr. Temple..seems to have possessed an extraordinary resiliency of spirit under this great affliction, for he married the daughter of Sir John Barnard shortly afterwards.

His fiery zeal was not abated by languor of soul. If the heavy burdens of disappointment ever weighed him down, or the strong hand of persecution over-powered him for a season, with a marvelous spiritual resiliency he rose again to his former levels of activity and power. In his irrepressible ardor his strength was ever renewed like the eagle's.

There could be but one result – premature physical decay, the loss of mental and spiritual resiliency, atrophy of emotion, then dissolution, a green grave at Eversley and a bust in the poets' corner of Westminster Abbey.

"One can't be very sorry for her after what she had done to ruin his life." Nell sat silent a while. "Some people never seem able to rally after a stunning blow like that. It's lack of spiritual resilience, I suppose, just as some people cannot rally physically from lack of vitality."

Some nations remind me of a giant whose one leg is longer than the other. On the outward side they are strong, on the inward side they are weak. Their physical exuberance is amazing; their spiritual resilience is dead.

Then there's this sexist, syndicated passage from 1930:

There is more dependence in the weaker sex and proportionately less responsibility. It is to be not uncommonly observed, too, that where men carry the greater burden of family provision, they also carry the burden of the burden of family care more heavily; the difficulties of their occupations thus being increased and their spiritual resilience being somehow depleted by the inroads their work makes on their enthusiasms.

His mental and spiritual resilience, not that of a young man, became impaired, and depression got hold of him.

From there onward, passages mentioning "spiritual resilience" are common enough that citing them here would have diminishing value.

Turning to NGram, we can see the phrase "spiritual resilience" definitely takes off and becomes quite common from the 1930's onward. 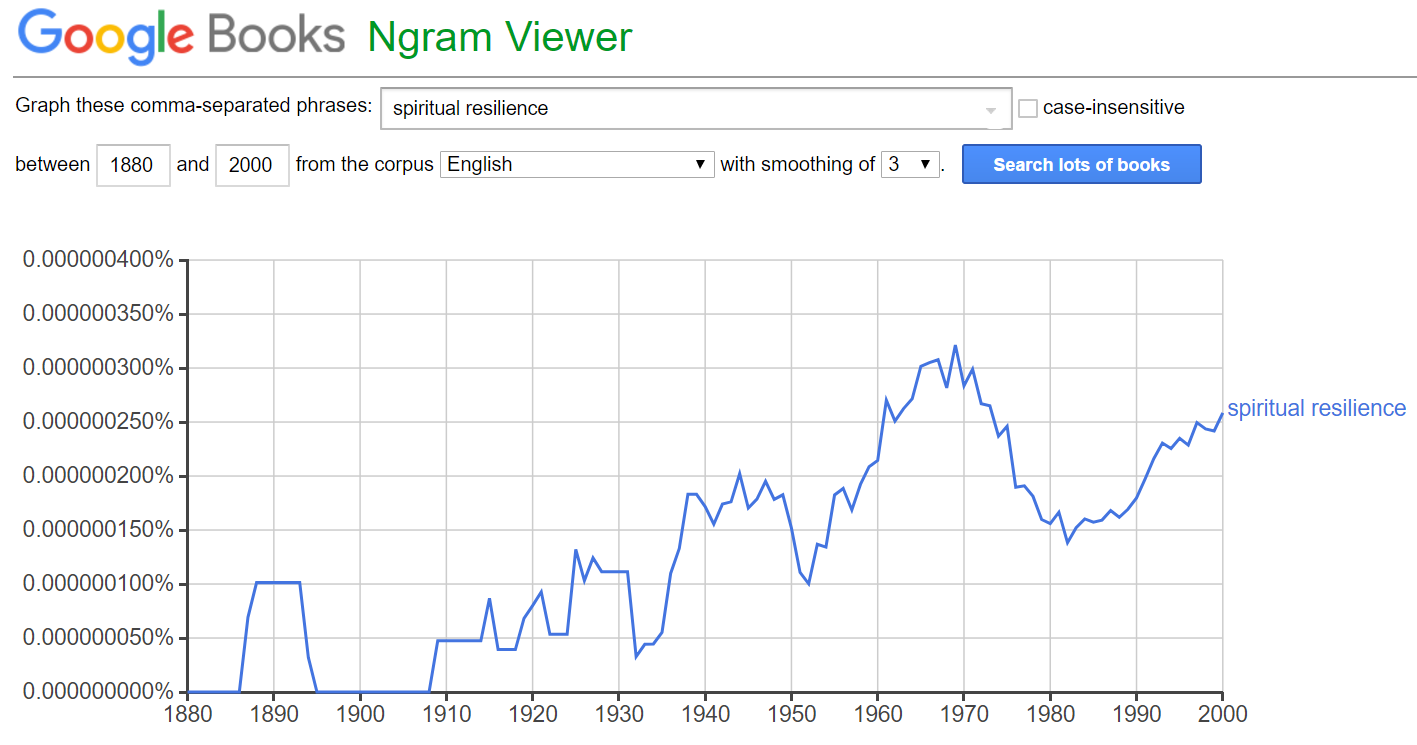 Following this line of reasoning regarding the expansion of "resilience," I compared a few specific phrases. It looks like other fields were quick to join in using the word, with "pyschological" rising up from behind to become the most common descriptor among those I explored. 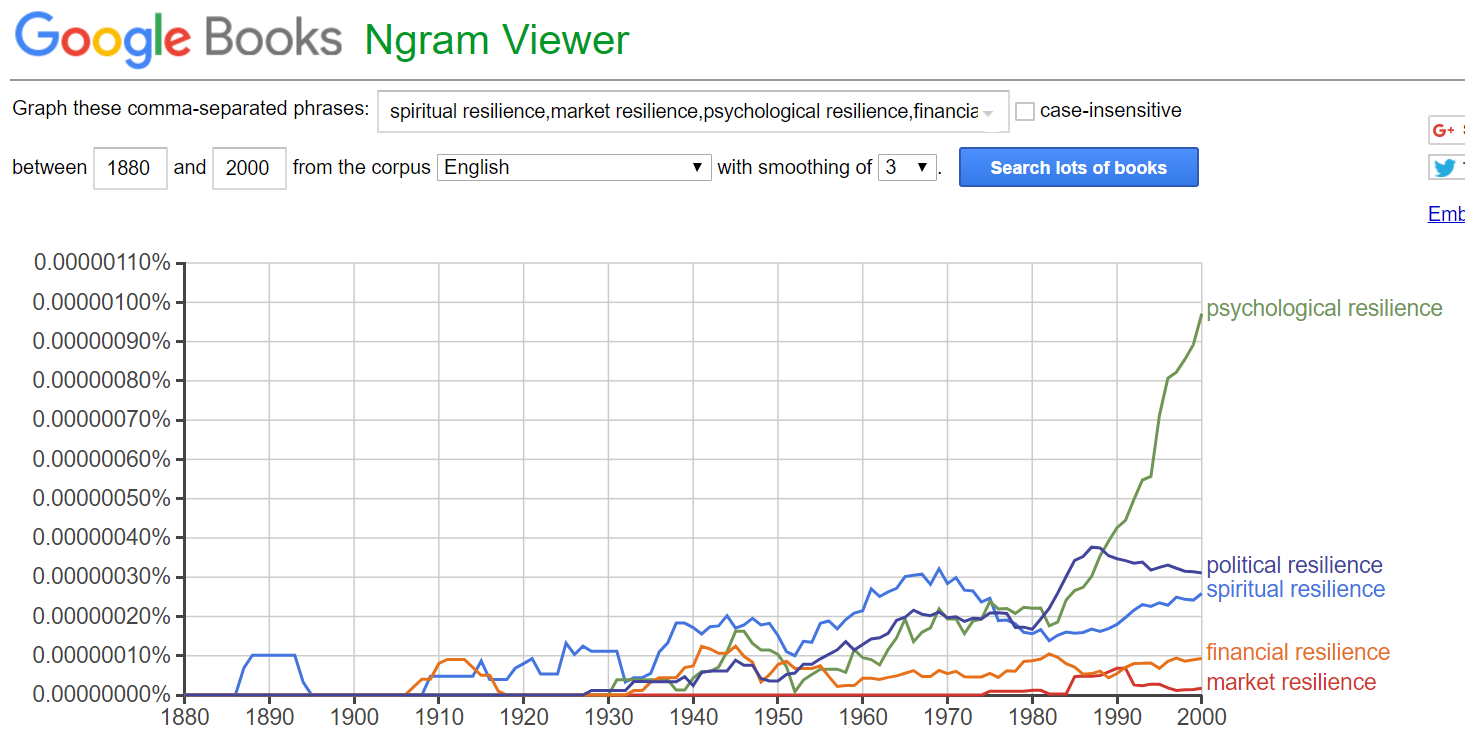 2
What's the figurative meaning of "the end of the line"?
2
Figurative usage of "astride"
3
Who needs a haircut?
1
Does "invertebrate" have a figurative meaning?
3
What made the "worst case scenario" a popular expression?
9
Usage, meaning and popularity of the term "nerd"
2
Figurative usage of "salvific"
5
Was “remake” as a noun coined by the movie industry?
3
What made “gusto” popular?