Ask Question
Asked 4 years, 4 months ago
Active 4 years ago
Viewed 3k times
9
This question already has answers here:
What is the name of a small unluxurious restaurant? (20 answers)
Closed 4 years ago.

Is there English term for fast food restaurant that have only small area for food preparation and counter (facing street) at which people order food and eat?

Here is a photo from Bladerunner that is an example of what I am referring to.

I found out later that in Blade runner screenplay they refer to this area as Noodle bar.

Stall noun 1 A stand, booth, or compartment for the sale of goods in a market or large covered area. ‘In fact, you don't even have to leave Bangkok to be entertained and amazed by the variety of restaurants, food stalls and markets on display.’ - ODO

The definition above doesn't talk about size, but the terms booth and stand both convey the notion of a small area.

Here is a link to an advertisement for a "Small Hut / Food Stall". (Disclaimer: I'm not knowingly affiliated to the linked business.)

In Britain, a street-food selling place can be referred to as a kiosk or booth but generally it is only if it is in the name of the company who owns it. Most of the time, I have only heard the term van.

Van is most often used in Britain, as in kebab van 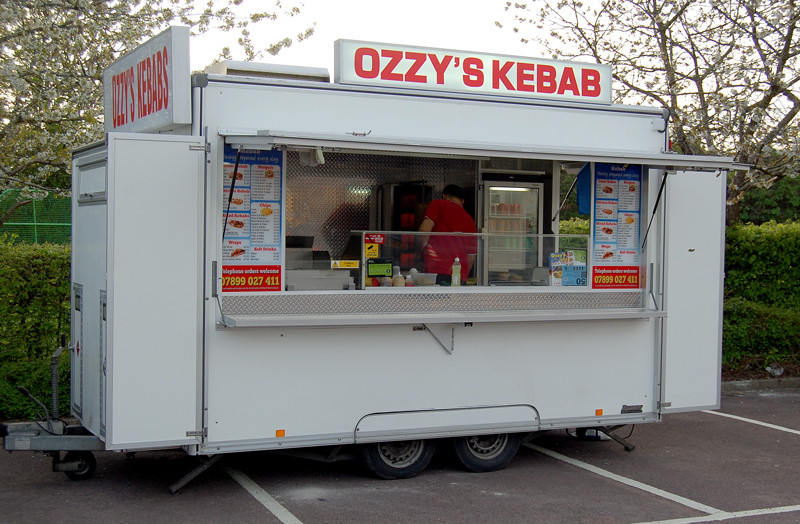 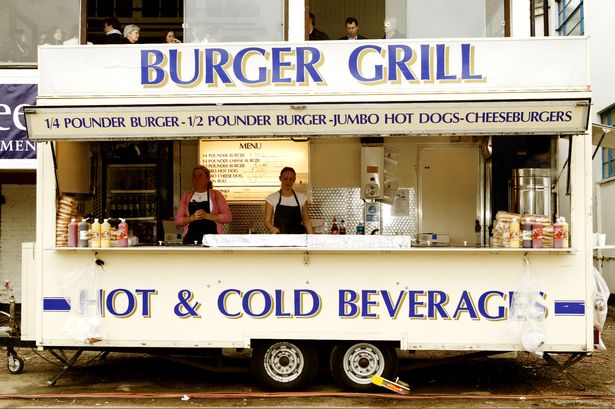 The thing with burger vans and kebab vans is that they generally don't just sell burgers. Whilst the name refers to their primary product, they sell other cooked foods.

Kebab vans sell burgers too and both kebab vans and burger vans provide hotdogs, bacon, sausage or egg baps in any combination such as egg and bacon, along with hot and cold soft-drinks.

You may have ice-cream stalls where the stall is static, 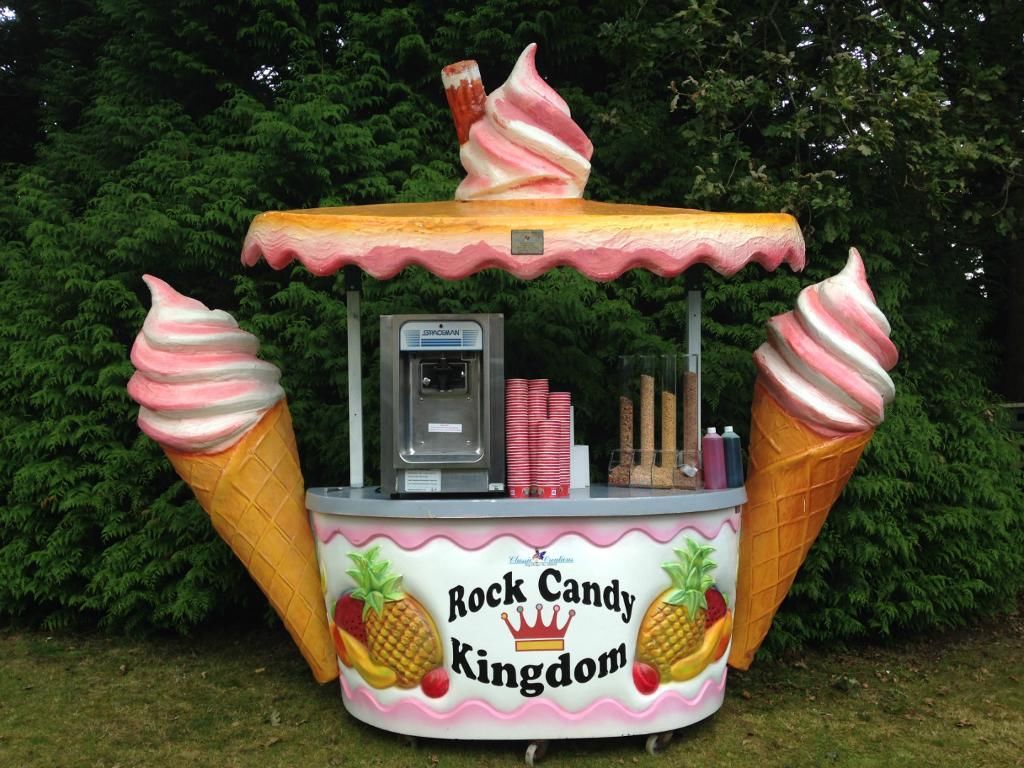 but travelling ice-cream stalls (which sell house-to-house for example) would be ice-cream vans. 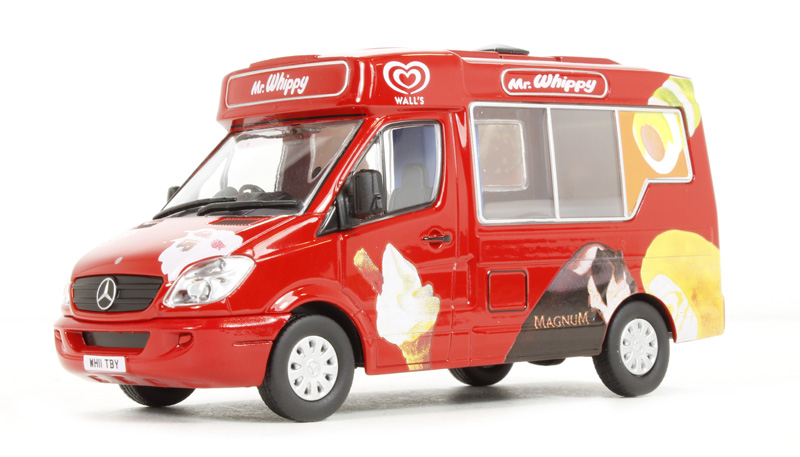 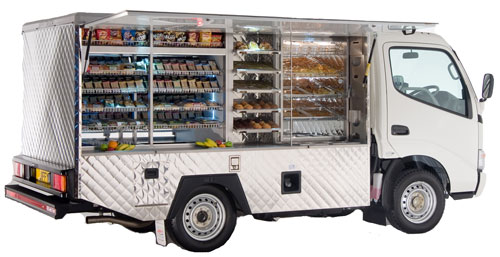 The OP's question conjures up the idiomatic expression, 'hole in the wall' eatery.

Another possible term is a lunch counter (even if they also serve breakfast or dinner). From Wikipedia:

So you have the counter, stools for patrons, and small food preparation area.

Note, however, that many of these were/are inside other establishments, rather than their own little holes-in-the-wall. The term may be most familiar to Americans from the Civil Rights-era sit-ins of lunch counters in Woolworth's department stores (see the Smithsonian's "Separate is Not Equal" web exhibit). The image below from VCU Libraries' Freedom Now Project shows students seated at such a lunch counter during a 1963 demonstration. 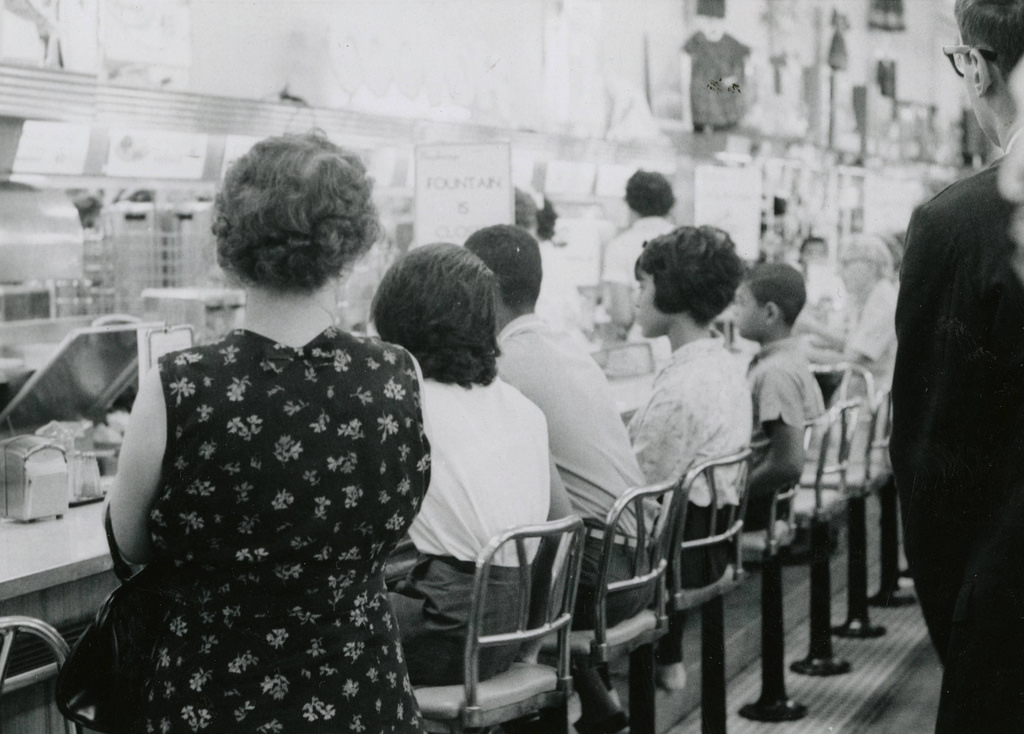 There could be different answers based on regional dialect. Here in the Midwest US, I'd call these either a food truck or food cart, depending on whether the motor was integrated into the vehicle.

food cart (noun) a mobile kitchen that is set up on the street to facilitate the sale and marketing of street food to people from the local pedestrian traffic. (Wikipedia)

Given your image this may be used as well. A bar can be used to describe the long table top where the people are sitting, and does not necessitate that alcohol is served; such as an "eating bar" found in a diner - see image

In Britain these are often termed as "kiosk" or a "booth".

These can either be temporary, portable structures or, as in the case of your question, an aperture set into the side of a larger structure.

63
What is the name of a small unluxurious restaurant?

3
'Horeca', is it English? Alternatives?
4
Is there a term for extracting a cultural element from its originating environment and placing it in a foreign and contrived context?
21
How did "lobster" mean two different species?
2
What do you call the area or place where employees clock in or out?
3
Is there a term for the point in time when a product can begin to use itself?
3
Is there a word for a queue or buffer of orders in a restaurant?
2
Concerning the usage of "eyeballs" in place of "viewers"
0
What is “software-intensive industry” in software engineering and business?
4
A word or phrase for people who eat together and share the same food