In the etymology age where every possible expression seems to have been run down to its true source, 'Liar, liar, Pants on fire' stands apart because I just googled it and nobody knows its origin fo' sure!

It is usually attributed (inconclusively and without much evidence, as far as I can make out) to an over-200-year-old poem apparently by William Blake, which is itself suspected of being a fake. Can some etymology wizard at ELU provide an authoritative answer backed by appropriate citation?

Peculiar usage: an old person in my hometown, who loved American colloquialisms, used to twist this around and say, "if it looks like pants and it seems to be on fire, then it's probably a liar!" [He later left India to join his son in the USA.]

Using the phrase "Liar! Liar!" seems to be older than the popular phrase associated with burning trousers. OED provides an early citation of the phrase used twice in a row:

I was able to locate the full verse in a later edition of the same book.

The phrase "licke dish," is interesting and personally I don't know how to explain that turn of phrase. However, it is remarkably similar to the phrase "lick spit" seen later in a context that seems relevant to pants on fire: 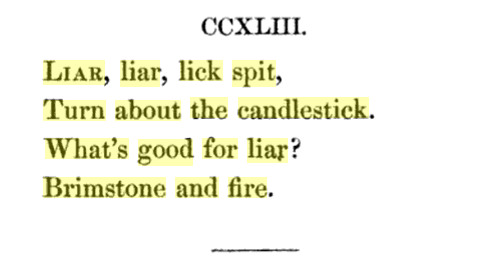 Meanwhile, use of "Liar! liar!" repeated for emphasis appears reasonably common in the 1800's. A few examples:

'I know nothing of acoustics, Signor. I am at a loss to understand your meaning," said he softly.

The article cited by Josh in the comments claims that the full line ("Liar, liar, pants on fire") was cited in print in 1933. The earliest reference I could find was from 1945, but clearly alludes at a historical context around the phrase: 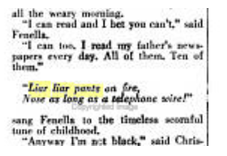 Overall, this collection of references still seems to suggest that the phrase, in some form or another, was used in verse before any sources I've been able to locate.

While I have no direct evidence of a link, the rhyming line "nose as long as a telephone wire" suggests a possible allusion to the popular and widely translated children's novel The Adventures of Pinocchio (1881-1883) by Carlo Collodi, where, as most readers probably know, the marionette Pinocchio's nose grew each time he told lies.

Following this line of speculation, it seems worth noting that at three points in the novel, Pinocchio is threatened with burning as firewood.

He swam on and on. After a while, he turned around again and called louder than before:

"Good-by, Master. If you ever need a piece of good dry firewood, remember me."

I think people are just looking a bit too hard. It’s been around for a while, but I doubt it’s biblical or anything. The words rhyme, and it’s likely that simple. Even old poems that might it seem based on contain the rhyme for he same reason.

I seem to recall an additional line, “... hanging up on the telephone wire!” After the initial chant.

Have never heard that second line and finally at 73 I decided I'd best learn the rest of the poem - certainly nondescript - maybe I shall complete the lyrics. © *"Liar liar pants on fire Matches caught you out you liar Tell the truth and you will see, Happier you'll always be."

Perhaps "liar, liar pants on fire" was inspired from Revelations 21:8: "But the cowardly, the unbelieving, the vile, the murderers, the sexually immoral, those who practice magic arts, the idolaters and all liars—they will be consigned to the fiery lake of burning sulfur. This is the second death."

3
Origin of the idiom "wear the pants"
11
Origin and meaning of "Hello the fire!"
1
Sure-fire: where does it come from?
1
Origin of the phrase "fire away"?
3
Origin of "fail spectacularly"
2
Phrase-origin for "Clear as Mud?"
2
all fire and toe