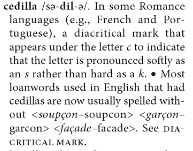 14
Diacritics and non-English letters in anglicized loan words: keep 'em, dump 'em, italicize the words, or what?
4
Does "garçon" mean male waiters only, not female waitresses?
0
Diacritics or meaning difference for deja vu