I'm trying to find the right word to describe a wealthy English dandy who finds himself rather out of place in a seedy bareknuckle boxing tavern. The story is set in 1890's, in London, and the character is an eccentric aesthete who might find himself in better company with Oscar Wilde or Agernon Swinburne than in his current company. His friend overhears people muttering derogatory terms under their breath. I've considered toff, fop, or dandy, but none of them seem like they carry enough weight. A homophobic slur might also work in this context, but I think it should convey how out of place this character is in his current setting.

Edit: Someone suggested I add a few sentences for context.

He could feel the eyes of the crowd still on him, and on his companion. Roderick, with his blue eyes and kid gloves to match, his delicate features, blond curls, and manicured nails, looked like a poodle among pit bulls in this place. “Insert derogative here.” The man who’d spoken was a particularly brutish sort, tattooed from neck to fingertip and scarred from his ear to his jaw. Jonathan’s fists clenched. “Leave it. It’s all right,” said Roderick, noticing Jonathan’s posture. Jonathan shook his head. He wasn’t about to let this lie.

Here are some options:

derogatory, informal
A foppish or effeminate man.
‘it was rare indeed for any athlete to be a pretty boy at a time when American men were still stuck in a 1950's macho mindset’

_informal _
An idle man who spends his time in places frequented by rich and fashionable people.
‘he was a lounge lizard in London and a stockbroker in Manhattan’

You could also use Beau Brummell, as Billy Joel does in Still Rock and Roll To Me.

I quoted the entry in its entirety, because someone who does not subscribe to the OED may not be able to access the link.

I came across this term in the novel Morgan's Run by Colleen McCullough. The novel centers on the transport of convicts to Australia in the late 18th century and the first settlement on Norfolk Island. One of the principal characters, the fourth officer of one of the transports, was a Miss Molly. You can find all instances of the use of Miss Molly in Morgan's Run here

Molly Mop is another possibility for the OP. The OED cites this use of Molly Mop

To us, Molly Mop sounds funny, but spoken in the context and time the OP gives, it would be very insulting to a heterosexual male.

"Swell" is a possible earlier term, still current in the 1890s, but in fact, "toff" would have been in use at exactly the time you're concerned with. It occurs in a poem printed in 1892:

— Doss Chiderdoss, "The Rhyme of the Rusher"

"Toff" begins to appear in the mid-1850s, and is well attested. See Green's Dictionary of Slang.

Perhaps 'froggy prosser', 'frog ponce', or one or another of those words, or some collocation thereof, would inspire the reaction described in the context you provided. The terms were chiefly derogatory, and common in popular and thieves' use in the 1890s. Although I could not readily locate attestation of the collocations in newspapers and books published in the 1890s, they are natural and likely collocations.

'Froggy', of course, was (and is) a common derogatory British term for the French, collectively or individually. Less likely is use with allusion to policemen, for which the appellation without the diminutive ('frog') would have been more common. Even so, the use of 'froggy' in a 'rough trade' setting in the 1890s would inevitably carry with it at least a hint of the 'policeman' sense along with the primary sense of 'despised Frenchman' and, more generally, 'despicable foreigner'.

OED provides four attestations of 'froggy' from the last three decades of the 1800s, including one from 1894, but these two uses from newspapers may be more telling:

A FRENCHMAN'S FREAK.
He Courted the Wife, not the Sister.
Froggy has £500 to Pay.
On Tuesday, in the Divorce Division of the Royal Courts of Justice, before Mr. Justice Butt and a common jury, the case of Lock v. Lock and Thommeret was commenced.
This was the petition of the husband, a clerk in the Inland Revenue, for a divorce by reason of his wife's misconduct with the co-respondent, Mr. Maurice Thommeret, a Frenchman, against whom damages were claimed. The co-respondent did not appear, but the wife pleaded condonation.

A sharp look-out was kept for the foe; and hope ran high amongst the sailors at the thought of at last being able to have a "slap at Froggy."

10. Usually derogatory. Frequently with capital initial.
a. A French person or a person of French descent; occasionally as a form of address.

For evidence of 'frog' in the sense of 'policeman', see the entry in the 1889 A dictionary of slang, jargon & cant, by Barrere, Albert; Leland, Charles Godfrey:

and for both 'frog' and 'froggy', see the entry in the 1890 Slang and its analogues past and present, by Farmer, John Stephen, and Henley, William Ernest: 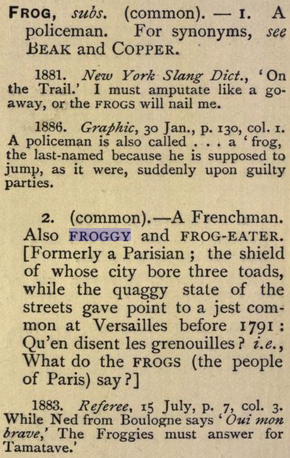 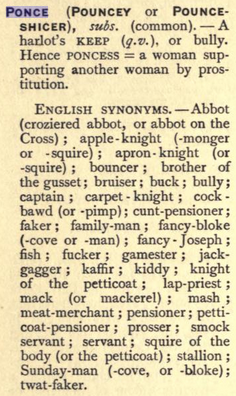 For other derogatory terms with similar meanings, see the list of synonyms provided for 'ponce' by Farmer and Henley.

Barrere and Leland (1889) present a much less detailed but here quite pertinent take on 'prosser':