What does EOL mean?

In a list of professors in a University's prospectus I found the acronym EOL. 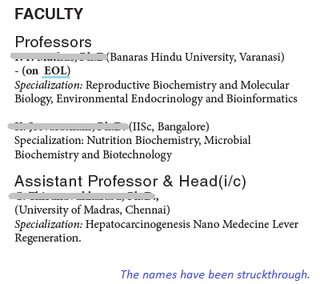 After some repeated web search I found nothing strongly related but a list of full-forms on thefreedictionary.com and the only phrase that can be of some relation is 'End of Lecture'. I didn't have much luck with Google on the usage of 'End of Lecture' either.

Summing up, what's the full form of EOL in this context.

In the Western tech industry, you most frequently encounter the term EOL for software that’s reached its end of life. It is occasionally used for the same in health care for the dying.

But on the Indian subcontinent, it apparently refers to one of a great many forms of leave to which various public employees are entitled. From this document from the National Institute of Technology at Tiruchirappalli we learn of just a few of these many, many leaves:

So probably this is a professor currently on extraördinary leave, for whatever reason. The linked-to document explains what this is at great length, the beginning of which runs:

Extraordinary Leave shall always be without leave salary and may be granted when no other kind of leave is admissible, or when other leave being admissible, the staff concerned has specifically applied in writing for the grant of EOL.

Based on the context, I'd suggest it stands for Extra Ordinary Leave.