Has 'fat chance' always been used sarcastically or was it once a factual term?

That 'fat chance' means 'a small chance' (and is always used sarcastically) is clear to me. But what I was wondering about is if the term used to be factual and then changed meaning because it started to be used in a sarcastic way, or has it always been sarcastic and was it never used literally?

(Is that latter option even possible? Isn't it so that the sarcasm actually only works if everybody knows that underneath 'fat' means 'big' here? But I'm above all curious if it ever was a normal term, such as 'slim chance' still is)

I found a few early instances where the use seems to refer to a significant chance, or even an exorbitant or undeserved opportunity, but this intended meaning appears to be rare and was rapidly overwhelmed by the figurative meaning.

Here are a few of the clippings I collected where "fat chance" seems to mean a big chance:

Isaac V. Fowler, the fugitive Postmaster has just recovered from the yellow fever in Cuba, and is going to Mexico to superintend a gold mine, where there will be a fat chance for pickings. 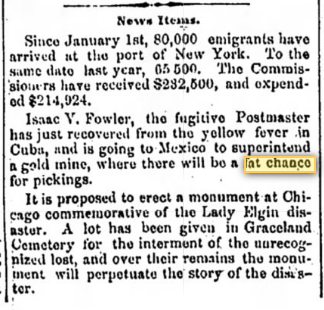 They read about the eighty percent dividends, and then resolve that the Congressmen who have such fat chances won't get votes so cheap next time.

...for the men work in such perfect harmony. A glance at their exhibition yesterday was sufficient to show that the Orioles have a "fat" chance to carry off the flag this season. 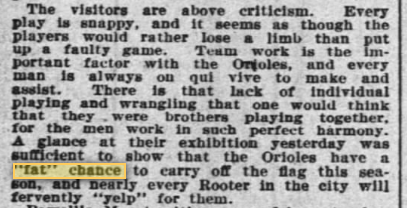 The first attestation of the phrase 'fat chance' I found is somewhat problematic, being in the 1778 (second) edition of Helenore; or, The fortunate shepherdess: a poem in the broad Scotch dialect, by Alexander Ross:

Fat chance he furder had, she cud na tell,
But was right fain, that she wan aff hersell.

Some gloss: "fain" means 'glad'; "wan aff" means 'got away'; "hersell" means 'herself'. "Fat chance he furder had" here appears to mean 'what amount of opportunity remained for him', with a slant toward the optimistic 'what large amount'; equally, however, the slant could be toward the pessimistic and ironic 'what small amount'. I'm entertaining objections to the interpretation, either way.

To be sure that the phrase was not a result of typographical error or unfortunate editorial intervention, I checked two later editions of the same work. By chance, I also found that the couplet appears in the Supplement to the Etymological Dictionary of the Scottish Language, v 2, 1825, as attestation of the "wan aff" gloss given in the foregoing (see entry for "To win aff, or off").

The next appearance of the phrase was a nonironic use in Chains and freedom: or, The life and adventures of Peter Wheeler, a colored man yet living, published in 1839:

You see I felt very independent jist now, for I begun to feel my oats a leetle; and so he agreed to give me twenty shillin's if I would, and so I agree tu, and went aboard, and glad enough tu of sich a fat chance of gittin' along.

Couched in ersatz dialect as this is, and supposing the author to be playing a long game, the phrase could be interpreted as an example of the character's misuse of a phrase that would ordinarily be ironic. I think the chance of such authorial subtlety manifesting in this particular work is...not good.

The present sense of the phrase ("a fat lot: a large amount, a great deal: always ironical and implying ‘very little, hardly anything’. Similarly a fat chance, implying ‘hardly any opportunity’", OED) appears to have arisen alongside nonironic or at least borderline nonironic uses, if we take these two, and so rather scanty, attestations as representative of early figurative (supposing the Scottish dialect is not meant to be literal) use, and add into the account later attestations that appear to be nonironic, for example,

Stephen will, I believe do much better in educating the public mind, in using his great talents to manufacture Men, rather than in contriving ways for half men to get at the ballot box. For if he gets them astride his horse, they will jump off and mount the first jackass that bellows out that he has a fat chance at the "crib," and holds out the idea that they may have a chance at the office of currying and feeding him.
Oh! we want men, and men will find a way to act. Haters of slavery, will fight slavery always, but office seekers will fight for office first and not fight slavery at all until it is popular to do so.

To be plain, and because there seems to be controversy based on speculation rather than evidence, while it is possible that an idiom with an entirely ironic origin might become established, it is unlikely at best.

In this case: I collected 47 attestations (48 if the suggestive but outlying 1778 Scottish dialect example is counted), from 1839 through 1905, the year before the earliest attestation given by OED (1906) for the "always ironical" sense. The corpora I used were the HathiTrust Digital Library (US and UK), British Newspaper Archive (paywalled; majority of collection is from 1800-1900), and Newspapers+ Publisher Extra (US, aka newspapers.com, paywalled), chosen for their comparative comprehensiveness and relative ease of use. My results can be checked and reproduced using those corpora, allowing for error (horrible, but possible).

Obviously, it is not desirable to display that quantity of examples here, so a detailed timeline will have to suffice.

What is immediately apparent is that ironic uses of 'fat chance' did not appear in the three corpora until 1888, nearly 50 years after the first nonironic use. Ironic uses were the only uses 1888-1893, followed by only nonironic uses 1895-1896, and possibly 1897. After that, ironic and nonironic uses both appeared in the same years, with the exception of 1900 (no ironic uses) and 1903 (no nonironic uses). It is also notable that, OED declaration notwithstanding, the preponderance of uses in these corpora during the target date range were not ironic.

The literal usage was either never used popularly or only used that way for a short period of time. My authority other than "not that I am aware of"? -- I say this based on comparing the Google Ngram and this idiom website quoted below:

Very little or no possibility, as in "A fat chance he has of coming in first.", or "You think they'll get married? Fat chance!" ...[this] slangy sarcastic [usage] dates from the early 1900s.

My logic: If the sarcastic usage dates from the early 1900s and the phrase itself started right around that time then there was only a small amount of time (if any) where the literal usage was common.

I disagree that the idiom only works if the reader/listener first understands the literal usage. My authority is my own experience here! Until 15 minutes ago, I never thought that this was sarcasm. When I read your question it hit me immediately. But yet, I have known for many years it meant "no chance"! I am glad I know now, thanks!

RaceYouAnytime has found some early references to the literal use so it is clear we cannot say it was never used that way.

It seems, from the beginning, to have meant "no chance at all". Green's Dictionary of Slang has the earliest recorded occurrence from 1850, in the form, ‘any one had a fat lot of chance to speak the truth there,’ so it would seem to parallel a phrase like, "a fat lot of good that will do," where "fat" operates as a negation. Ngrams suggest that the earliest form was "good chance" (pre-1800), with "slim chance" appearing in the 1830s. "Fat chance" only appears (according to Ngram) in 1900. That would suggest to me that "slim chance" originates as a contrastive term to "good chance", with "fat chance" (coined out of "slim chance") indicating (ironically) something even less than a slim chance.

I haven't found early non-sarcastic usage of fat chance versus sarcastic usage and I doubt you will. Its wording directly contrasts with the similar thin chance (Miscellaneous Works of Tobias Smollett, 1848) and slim chance(American Turf Register and Sporting Magazine - Volume 4, 1832). I can't think of any usage in English where fat somehow becomes non-ironically inverted in its definition. However the fact that usage of thin chance and slim chance appear later than fat chance makes one wonder if they were the natural result of the usage of fat chance for a non-ironic, non-sarcastic phrasing.

In regards to fat lot of chance, I have seen fat lot used non-ironically, but in a completely different context and usage, in regards to an actual plot of land.

Google Ngram Viewer claims sarcastic usage goes back as far as at least 1804 for British English with the mention of Fat chance. Robin Hamilton points out that the original publication was actually in 1768. 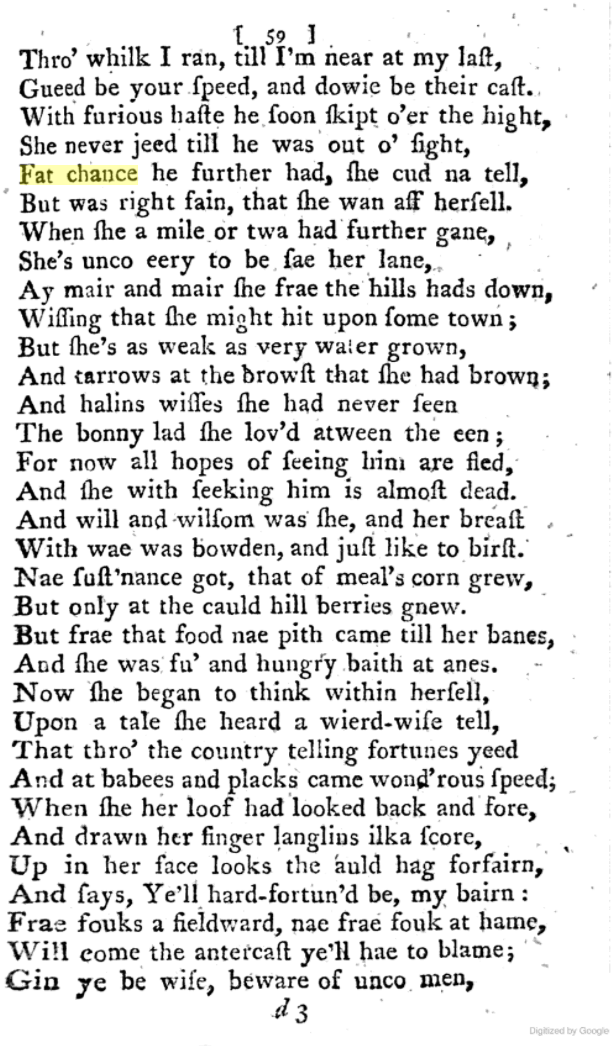 My interpretation of "fat" in "fat chance" is not exactly ironic in the way other answers have described. I think "fat" means "exaggerated." So to say, "Fat chance that you get the job," is like saying "You're overestimating the possibility that you get the job."

If that interpretation is right, it wouldn't necessarily have to start with a different meaning, because the "exaggeration" sense would be part of the original message.

Not the answer you're looking for? Browse other questions tagged etymology phrase-origin irony or ask your own question.