Did gamblers get their lingo "hijacked?"

The earliest reference to "hijack" that OED lists is from 1923.

But the etymology is listed as unknown.

Interestingly, I found several newspaper references to a poker game robbery in 1920 that seem to antedate the OED quote, although they all used a hyphen. 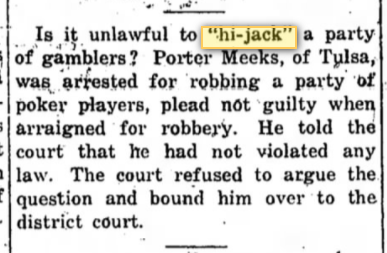 Looking further, I found a 1916 newspaper reference to "hijacks," also referring to a poker game.

Given that these references are poker-related, my immediate hunch was that the term may have originated as a gambling term. This doesn't seem far-fetched to me; Winning a poker hand with a high-card jack would be a figurative robbery of sorts in some poker variants.

American English, perhaps from high(way) + jacker "one who holds up" (agent noun from jack (v.)).

This explanation makes sense but appears to me to be a little bit misleading. It makes it sound as though "jacker" meant "someone who holds people up," i.e. robs them, but it actually seems to refer to "jack" as in "to hoist something up on a jack."

Having researched this into the two separate directions, I thought it was time to post a question.

Green's Dictionary of Slang has: "... according to Cohen, Studies in Slang II (1989), based on high jack, zinc ore, a term used c.1899 in the mines of Webb City, Missouri, then the world’s greatest lead/zinc mine. This zinc ore was more valuable than the basic lead among which it was found, and miners would steal it to further enrich themselves. The term was virtually SE [Standard English] by 1900, as are the later meanings referring to the holding up of vehicles, including aircraft, and the killing or ransoming of their occupants."

However, none of the citations actually given in GDoS antedate 1923, or suggest a gambling connection, so it looks as if your references are completely new material. There's a snippet view of Gerald Cohen's article here.

There is support for the Etymonline reference to a highwayman. A story entitled "The Leather Ear" appeared in the Saline County Journal of March 03, 1881. It is set on a coach and the protagonist talks of a "Dick-Turpin-Sixteen-String-Sack sort":

"Well, I should have protected you, you know, had be dared any of his high-jacks in here. As for me, I would defy any robber to find my money."

Reinforcing the relationship of hijack to larceny is the following from "A New Congressman" in the Evening critic, February 07, 1883:

"I am elected to the next Congress from Baltimore," whispered the Colonel confidentially, "and you bet I will make it lively for Sam Randall and them high-jack robbers. The first thing I do is to tell Sam Randall to come to hell right off and have him arrested."

Further evidence that the term is related to highway robbery is this exposition from "Another Man Killed in Oil Field Town", The Daily Ardmoreite, December 05, 1916.

For the benefit of those who may not know what the term "High Jack" means let it be explained.

If a person possess a certain article that a certain other party desires to possess, and the latter does not care to go through the formality of offering current coin of the realm for the same, he simply takes a big gun In hand, lays in wait along the side of the road or enters the place of business of the one whom he has evil designs upon and at the point of his artillery takes what he sees in sight and gets away with it.

George Jean Nathan and H. L. Mencken's American Mercury was, in a way, a precursor to the Stack Exchange English Language and Usage. The Mercury would publish language questions from readers and solicit answers from fellow readers. In the June 1926 issue (pp. 241-2), one H. K. Croessman of Du Quoin, Illinois offered the following regarding the origins of hijack.

The first time I heard the word hijacker was from the lips of an Oklahoman. The word being new to me, I asked him its meaning, and he told me that it meant the same as a footpad or road-agent. He explained its derivation as coming from the command customary in hold-ups: "Hold up your hands." This was gradually corrupted to "Stick 'em up high, Jack," or more simply, "Up high, Jack," Jack being the common generic name for any male person of unknown or uncertain identity. Thus, the Oklahoman explained, both the words stickup and hijack originate from the same command. To hijack is the verb, now apparently used exclusively in reference to road-robbery of illicit liquor. But the word itself is older than national Prohibition. And, finally, the change from high to hi is simply a corruption typical of a tendency in America.

Research via newspapers.com (paywall) suggests that the earliest uses of the term are to describe (alleged) intimidation by the I.W.W. ('wobblies') c. 1915-18, and of the pre-Prohibition robbery of legitimate liquor trucks by gangsters. The use by hobos does not appear to be recorded in the press and may be specific to N. Anderson Hobo (1923). Unfortunately neither group of examples helps with a possible etymology. For my own work, I have removed the supposed link to lead mining.

I wonder whether "hijack" was used originally when the thief steals from someone who is breaking the law and thus presumably cannot complain. During prohibition I understand that one gang would steal liquor in transit which belonged to another gang. Such would be the case when both gambling and selling liquor are illegal. Now it seems to be limited to vehicle theft when the vehicles are being driven.

7
Where did "sorry" get its vowel sound?
9
How did "strike" get its baseball meaning?
8
How did "used" get its meaning?
5
How did "kill" get its positive connotations?
1
How did Chinese Parsley get its name?
4
How did the "h" get in "gherkin"?
27
How did words like align get a g?