How to calculate number of syllables in a word using only the IPA (International Phonetic Alphabet) spelling?

I want to write an algorithm to calculate the number of syllables in a word. This process is an automated one that will be run on an entire dictionary so manually counting the number of breaths, chin movements etc. as mentioned in other questions won't scale. I also don't want to visit a website like howmanysyllables to input the word because I don't want to depend on a non free and open source system.

Consider these two transcriptions to IPA:

For the IPA word "pronunciation", lower apostrophe, upper apostrophe and period can be used to tell where the syllable breaks occur. The IPA word for "conscientious" only seems to strictly indicate a single break. You could say the "ʃ" indicates a syllable break but I worry this isn't the case for all words.

Is there a list of rules that define syllable breaks in US English for IPA transcriptions?

So after coming across this question and wanting to know the answer myself, I managed to pull together a few different sources of information into one Excel spreadsheet, and get data for just over 31,000 words with both their IPA pronunciations, and the number of syllables. I also found some frequency data, which can be used to naively split the words into deciles, according to how often the words are roughly used - meaning that you can sort the words by both syllable length and frequency of use (which is a very rough measure of complexity.)

Caveat: the pronunciation data I've pulled is from UK English. I pulled it from a GitHub repo containing IPA information for many languages, which also contains a file containing US English words and their pronunciations, linked here.

I haven't integrated it myself because I only need the UK data*, but you can pull the data into Excel fairly easily - the fields are split by whitespace, so Text-to-columns should separate the IPA from words. If you're comfortable with Excel then it should be fairly simple to combine this with the other data to get a list of all US English pronunciations and their syllable counts.

The rest of the sources for the data are linked in the spreadsheet itself.

* Also, I did try to add in the US Word data to the Google Sheets, but Sheets complained that this would exceed the cell limit. I put together this project based on UK data before I realised that you're probably from the US, and built all the formulas around it, so it would take a bit of unpicking for me to switch it over fully. I might come back to it another day. Hope this is still of some use to you.

How to calculate number of syllables in a word using only the IPA (International Phonetic Alphabet) spelling?

You can, but it doesn't always work and as oerkelens said in the comments:

Bear in mind that some words have a different number of syllables for different speakers.


The Oxford English Dictionary defines a syllable as:

A vocal sound or set of sounds uttered with a single effort of articulation and forming a word or an element of a word; each of the elements of spoken language comprising a sound of greater sonority (vowel or vowel-equivalent) with or without one or more sounds of less sonority (consonants or consonant-equivalents).

This is a technical definition of a syllable. From the above definition, a syllable can also be defined as a set of (one or more) sounds including at least one vowel-like sound and possibly with other consonant-like sounds surrounding it.

Every syllable has a nucleus which constitutes a sonority peak.

Vowels are the most sonorous and obstruents are the least sonorous sounds. The above values can be represented in a sonority curve. Take for example the word 'crime'. If 'crime' is pronounced [kɹaɪm], then the sonority curve for 'crime' would be: 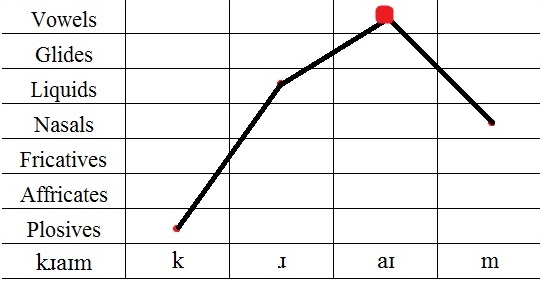 As you can see, there's only one peak (red), hence one syllable. (Diphthongs = monopthongs)

Moving on to the original question...

In this case, the /n/ is syllabic ([n̩]). Syllabicity can also be denoted by a superscript schwa (/ə/) or a parenthesised schwa (ə) before the syllabic consonant), so 'pronunciation' can also be transcribed /pɹəˌnʌn.siˈeɪ.ʃən/. The /siˈeɪ/ is pronounced more like [sijeɪ] i.e. there's an intrusive /j/ (or the /e/ is non-syllabic) in it, so 'pronunciation' can be transcribed narrowly as [pɹəˌnʌn.si.jeɪ.ʃn̩]. Now let's make a sonority curve for it:

There are five peaks (indigo) here, hence five syllables. 'Conscientious' is almost the same, insert a /j/ between /i/ and /ɛ/ and make four peaks.

So it's possible to find the number of syllable from the IPA transcription.

Not the answer you're looking for? Browse other questions tagged pronunciation syllables ipa or ask your own question.

5
What are the syllabification rules for English?

5
What are the syllabification rules for English?
4
Dictionary program/website that has IPA+recording for as many words as possible
8
Syllable — Phonetic Online List/Dictionary with word examples
1
International Phonetic Alphabet: why are the symbols used for the letter “i” in “champion” and “billion” different?
3
Is there a rule for the position of the accent (stressed sound) in words ending with -ative?
0
How many syllables in “every”?
3
Different /ə/ pronunciation at the end of a word; for example, in “phenomena”
4
Should “ohmmeter” be stressed on the first or second syllables, or both?