Please untangle the logic of this for me

Could someone please rephrase this for me, because every time I read it I get tangled up:

According to the Second Circuit, there is no principle of administrative law which, absent a disagreement between a hearing officer and reviewing agency over demeanor evidence, obviates the need for deference to an agency's final decision where such deference is otherwise appropriate. (http://caselaw.findlaw.com/us-9th-circuit/1214593.html)

Apologies for the weak resolution, but below is what sentence-diagramming software yielded from a simplified version of that sentence.

In short, I would describe the phrase as this:

According to the court, there is nothing that overrules an agency's decision except for [absent] when there is a disagreement between a hearing officer and a reviewing agency.

A more full version with the relevant portions in bold:

According to the Second Circuit court, there is no principle of administrative law which, absent a disagreement between a hearing officer and reviewing agency over demeanor evidence, obviates [removes] the need for deference to an agency's final decision where such deference is otherwise appropriate.

According to the court, there is no principle of administrative law which, absent a disagreement (over demeanor evidence), removes the authority of an agency's decision where appropriate.

Agency in that case is used twice and is ambiguous, so the full meaning may only be known by reading a wider portion of the original text. 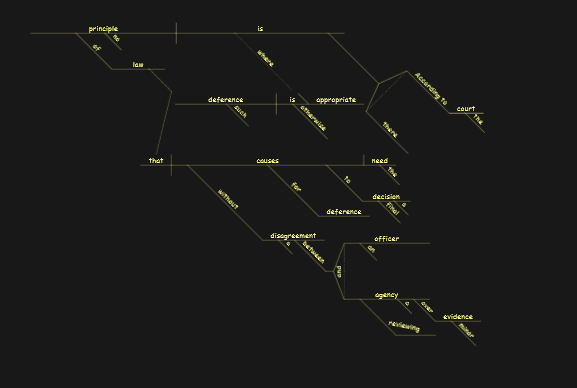 Thanks to your help I have a proposal:

I should explain that the first decision that gets made is made by the hearing officer. Then, if that decision gets appealed, there is a second decision by the review officer (review agency). If there's another appeal, this time it's decided by a court.

I think "demeanor evidence" refers to the fact that the review officer only reviews the record (transcript, exhibits, closing arguments), but doesn't bring the witnesses in to testify again. That could give the hearing officer an advantage, in being able to see and hear the witness's demeanor. In this case, it might make sense to give deference to the hearing officer.

Not the answer you're looking for? Browse other questions tagged meaning-in-context logic sentence-meaning or ask your own question.

0
Logic behind the word “only” (paragraph comprehension)
1
Between each/every (logic analysis)
0
what is the meaning of this sentences please tell me
1
Trying to understand the logic behind this sentence: The lecture will be given if at least ten people are there