What is the meaning of “Apcie”?

On John Calvin's Sermons on Deuteronomy, he says:

"Not that god bringeth in any newe thing here: but for that he blameth the people for their foresaid lewdness, shewing that his doctrine had ben ill observed, like as when children do not profit wel at schole, but play the grosse Asses, when they have spent a whole yeare and are never the further forewarde, they must bee faine to returne againe to their Apcie."

I have found "apci" in another version, but I could not find the definition online. What does "apcie" mean?

It is a variant of 'ABC', which in this context should be read as a primer, or first book for teaching children their letters. Searching the OED brings up the definition for ABC, and includes 'Apcie', along with other variant spellings, in the entry. I searched Google for 'Apcie' together with "ABC" and found the 'History of the Horn Book. Volume 2' which contains:

In early days before the invention of printing, the primer, or little collection of devotions used in schools, opened with the criss-cross-row or alphabet arranged in horn-book fashion, and the terms “ prymer ” and “ABC ”—the Middle English name for the alphabet—naturally came later to be applied to all elementary books for children’s use. The teacher of religion and of the alphabet went always together, and some account of the early MSS. and books of instruction is almost necessary in a History of the Horn-Book. Copies of the primer (the earliest known is about 1400 A.D.) are scarce, but considering the efforts made to destroy them, the wonder is that so many have been preserved. Cut 166 shows the first page, slightly reduced, of a vellum MS., a fourteenth-century common prayer-book in English, now in the Glasgow Hunterian Library. The contents are of the usual order—The Hours, The Seven Psalms, The Fifteen Psalms, The Litany, The Office for the Dead, and The Commenda tions—with some additions before and after the usual text.
ABC was written in numerous forms—abc, a b c, apece, apecy, apcie, apsie, absee, absie, absey, abeesee, abce, abcy, abece, abice, abicee, abcie, abcee, a-bee-cee, a-pece, apecey ; in Welsh Yr Abiec. The earliest reference given in the (Oxford) New English Dictionary relating to the use of one of the forms (abece) is 1297. Cotgrave gives “Abece, Abcee, the Cross-row, an Alphabet.”

book that serves as primer for study. The hornbook originated in England as long ago as 1450,1 or earlier.2 The term has been applied to a few different study materials in different fields. In children's education, in the years before modern educational materials were used, it referred to a leaf or page displaying the alphabet, religious materials, etc., covered with a transparent sheet of horn (or mica) and attached to a frame provided with a handle.[3] 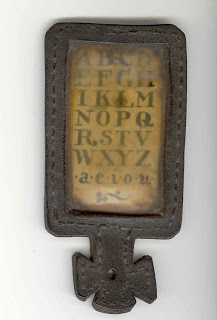 Not the answer you're looking for? Browse other questions tagged early-modern-english or ask your own question.