What does “covfefe” exactly mean?

Ask Question
Asked 4 years, 8 months ago
Active 3 years, 11 months ago
Viewed 482k times
42
Locked. Comments on this question have been disabled, but it is still accepting new answers and other interactions. Learn more.

As I couldn’t find out the meaning of “covfefe” in several English dictionaries at hand, I googled the word. There was no heading and definition of this word there.

I heard a TV hostess seriously asking a male guest what “covfefe” means in a TV show tagged in the Washington Post, wherein he confidently explained it’s Yiddish meaning “go to bed.” But to me, this explanation doesn’t seem to fit the line, “President Trump targets ‘negative press covfefe’ ” at all.

What does “covfefe” exactly mean in the context of “President Trump targets ‘negative press covfefe’ ”?

There is already a UD entry, and a pending one for Collins Dictionary:

This is an unprecedented situation where a head of state's typo became a widely mocked online meme. Essentially, Trump coined a new word and then openly challenged the public to guess what it meant in a follow-up tweet.

A word like this, that becomes famous in a single day, could disappear and remain meaningless, or it could take on a new meaning through viral uses and memes.

As has been established in the other answers, it was almost certainly intended to be the word "coverage," but its ultimate meaning could be completely different depending on whether it sticks around or fades away, and on how slang trend-makers move the meaning. (This is a process that we're participating in right now, along with a lot of the Internet.)

One possibility is that people could use the word as a tongue-in-cheek synonym for bullshit or nonsense, somewhat like the word "balderdash" functions now.

Did you hear what Steve said? That was absolute covfefe.

It's also possible that this was what Trump intended (maybe with the help of some wittier aides) to imply in his follow-up tweet.

Tweet 2: Who can figure out the true meaning of "covfefe" ??? Enjoy!

It's most likely to be a typo for coverage given the context, though by most metrics there are plenty of more likely typos.

Based on an analysis of error distances, and taking into account QWERTY keyboard layouts, the rather obvious coffee comes out top. Tweeting at midnight, does that mean too much or too little? But coverage is the highest-ranking word that makes any sense in context (coming in at 33rd, but my list of English words is huge -- over 600,000 including variant spellings and quite a lot of proper nouns).

The script is now up on GitHub but to run it you need: Python, python-Levenshtein and a words list (see the source for links).

Also at that GitHub link is a text file with all the output for a very large list of English words, with a Jaro-Winkler metric >0.7 (where 0 is no similarity between two words and 1 means they are identical). The total error distance on a qwerty keyboard is included, where 1 means keys are adjacent. This is suitable for importing into a spreadsheet.

(update) It was a typo

Donald Trump has an unfortunate history of typos and misspellings in his tweets:

From the original source cited by the OP, posted 31 May 2017, come the following The Washington Post quotes

The Washington Post reporter, Travis M. Andrews, clearly stated that “covfefe” was garbled, a typo-tweet committed by the President of the US, a “nonsense” word unlisted in M-W, and not English. Is there any reason for a reputable newspaper journalist, and a native American English speaker, to lie about something so trivial?

Covfefe has attracted its own misspellings on the Internet:

Covfefe (whatever) blazed in the night sky for two brief nights. It's possible that some or many American speakers will want to perpetuate this term, but I doubt it will survive the summer.

Does anyone still talk about the POTUS's infamous misspellings/typos: Barrack (Barack), tapp (tap), and unpresidented (unprecedented)?

Donald Trump's “neologism” is still uttered in talk shows and used in social media. Even though I do not visit Facebook, nor have I an Instagram or a Twitter account, I am a keen covfefe watcher and today I spotted an exciting new development in the etymology of covfefe. Martin Gholami has figured out the true meaning of the term. 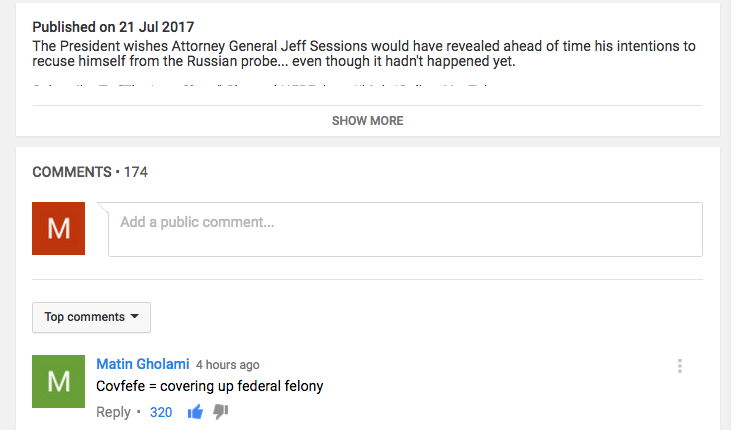 origin
mid 2017: blend of covering up, federal, and felony.

kerfuffle: (noun) a commotion or fuss, especially one caused by conflicting views. "covfefe" is how a half-asleep person would pronounce kerfuffle. The time of the tweet was 12:06am..

Not the answer you're looking for? Browse other questions tagged meaning is-it-a-word neologisms trumpism or ask your own question.

2
What does drenched book mean?