Question on the term: Take a gander. I've seen and heard it used in two different ways.

Verb: (idiomatic) To take a look; to check or examine.

They all went downtown to take a gander at the new shops that opened there.

Verb: Take a gander is defined as to make an attempt or venture a guess.

An example of take a gander is when someone asks if you want to try to answer a hard question in a trivia game, or help to solve a puzzle that is being done.

Online, I see option 1 to be a more common usage.

Trying to get a feel on how many would or have used it the 2nd way.

word-choice phrase-meaning idiom-meaning
Share
Improve this question
edited May 25 '17 at 1:35

Your second definition appears to be a misunderstanding of the standard definition (as amply documented in Sven Yargs' answer). The only "authority" that includes the meaning "take a chance/gamble" for this common idiom is YourDictionary.com, in one of their own (not borrowed) definitions:

An example of take a gander is when someone asks if you want to try to answer a hard question in a trivia game, or help to solve a puzzle that is being done.

This online dictionary is largely an aggregator of definitions, but they also include some "original" definitions written by the LoveToKnow staff (source). I haven't been able to find any information about the qualifications or process of these staff lexicographers. Compare that with this explanation from Merriam-Webster of how words and definitions get into their dictionaries.

In this case, it looks like a writer or writers for YourDictionary have mistaken a phrase meant to convey "come take a look at this [puzzle, so you can help me out with it]" as meaning "come try to solve this puzzle for me."

It's easy to see how such a mistake might be made if the writer(s) in question only encountered the phrase in limited circumstances, and it is possible that some other isolated individuals out in the world have made the same mistake and thus mistakenly use the word this way. It is also possible that this mistaken, but easily accessible, definition will drive usage of this novel meaning of the phrase. However, this is not currently a standard definition of take a gander.

To look for evidence of usage, compare the phrases take a gander at (the usual collocation) with take a gander on (which might be expected at least sometimes for a synonym of take a chance/gamble on): 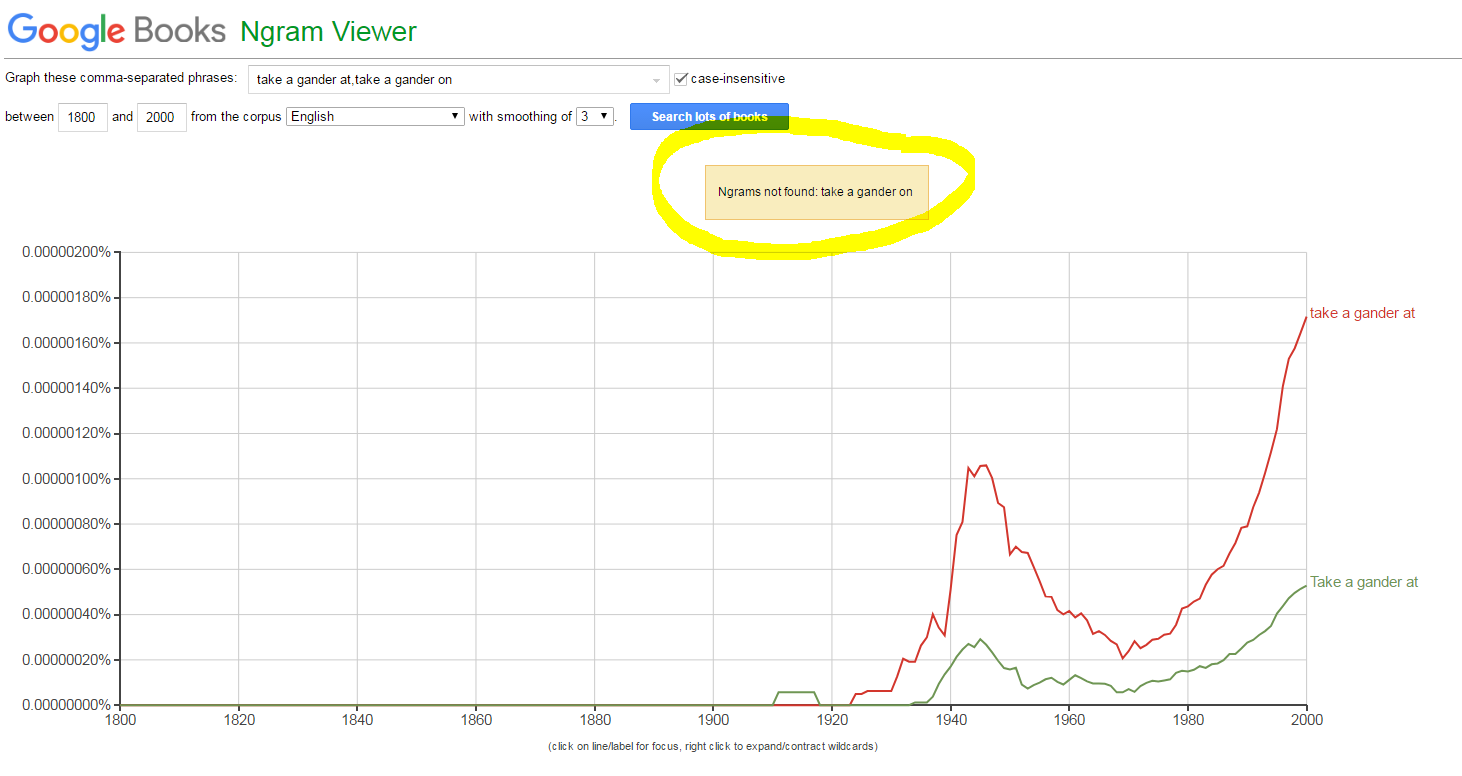 Now, it is possible that the usage is still at, with a meaning similar to take a guess/stab at. I do find a very few actual examples of take a gander at this/the puzzle/game but all of these still appear to be at least consistent with the sense "have a look" (though, again, someone unfamiliar with the phrase might possibly parse one or two of them differently). For example:

All you constructors out there who put in as many names as you can at every opportunity, take a gander at this puzzle. Very tough, but with no junk. (Comment on blog "Rex Parker Does the NYTimes Crossword Puzzle", January 30, 2016)

When I say the systems work as a cartel, that might not fully explain things. Let’s take a gander at the game’s crafting system and see what I mean. (Brendan Caldwell, "Premature Evaluation: Crossout", Rock Paper Shotgun, September 19th, 2016)

Looking for "a gander at" and gamble returns results like this:

Before you can play on the site you ordinarily have the opportunity to take a gander at the distinctive chances (for sports betting) at the diverse recreations accessible (for online casinos) or the quantity of players (for poker sites). ("How Online Betting Works – The Basics", gamble-aoiro.com, May 20, 2017)

Keep reading and have a gander at some of Marvel’s major misses on their journey to becoming a powerhouse on the screen. . . . Imagine you’re FOX. You’ve had some major success with the X-Men animated series. You took a gamble on The Mighty Morphin Power Rangers and they blew up. What to do next? . . . You make a pilot for a live-action X-Men series that features a crew of hip teenagers. . . . There was buzz at the time that ABC bought the pilot and was going to move forward with a series. It seems they weren’t even willing to gamble on it. (Matt Bromagin, "15 Movies And Shows Marvel Doesn’t Want You To Remember", The Clever, May 01, 2017)

That last example juxtaposes the original usage of phrase take a gander with the very similar take a gamble. Clearly this author knows what the former means, and knows not to use it in the latter's place.

Let me add that these examples are not cherry picked; the first is the only example I could find of "a gander at this puzzle"; I could not find any examples of the phrase with the puzzle, the problem, this problem, or my problem (I don't rule out the possibility that they're out there, but Google wasn't showing them to me). The examples with game and gamble are slightly more numerous (results in the low double digits), but I still didn't spot any examples with the second meaning you cite. I think, from your statement in the question that

Online, I see option 1 to be a more common usage.

you probably haven't had much luck finding examples of the second usage, either.

To make a too-long story slightly longer, I see no evidence that the definition created by YourDictionary.com is an accurate representation of how this phrase is currently used in any major dialect of English. It's possible for it to shift in meaning, but if such a shift has already begun it is so far still essentially undetectable.

Here is the relevant entry from Mitford Mathews, A Dictionary of Americanisms on Historical Principles (1951):

According to Lighter, the noun gander has two slang meanings: "a man, esp. away from his home" and "a look."

Amusingly, both Mathews and Lighter note that a gander party refers to the male equivalent of a hen party—a social gathering exclusively for men. Presumably, at some point, socializing men decided that it was more dignified to be linked to male deer than to male geese.

and this not much longer entry for gander as a noun and as a verb:

If "take a gander" has acquired the meaning "take a gamble" it must have done so fairly recently, as there is no trace of its use in that sense in any of the slang dictionaries I consulted.

I've never heard of option 2 being used in British English. The origins of the word are connected to the head movement of geese. Referring to the nursery rhyme "Goosey goosey gander where shall I wander ..."

I live in America, and my husband just informed me that I’m the only person he’s ever met that uses the phrase “take/make a gander” with the meaning of making a guess. I looked it up and found this site, so I just wanted to let you know someone does regularly use the second option regularly, even if I’m alone on that.

I’ll make a gander and say you aren’t ready to move that, yet.

The sentence I used that started our little debate on the meaning of gander. I use it mainly as a presumptuous guess, never for example as an assertive verb on myself such as “I gander that…” as “guess” is just better.

Not the answer you're looking for? Browse other questions tagged word-choice phrase-meaning idiom-meaning or ask your own question.

4
"Demonstratable" — a dictionary word, or just a well known hack?
3
take / take on + responsibility
0
Meaning of "just as much" and "just as"?
1
Use of "well" in "Britain’s Labour Party is in thrall to a man well to the left of Mr Sanders"
0
Does "take the crown" mean anything like "take the cake" or anything at all?
1
Is “Go down like a shot dog” a well-received turn of phrase?
9
To take something off someone's plate