After a far greater than anticipated amount of research, I am still unable to find and confirm an exact antonym for the word 'replicable'. I have found multiple sites that have one (or some combination) of the three following words: 'unreplicable', 'non-replicable', and 'irreplicable'. For a 4 page paper that I am writing, (I'll be using one of these three words in a thesis statement which I've been attempting to perfect for 20 minutes now), which one of these three words (or maybe some other word) would be best?

My thesis statement is here: https://pastebin.com/7ywaPhq3 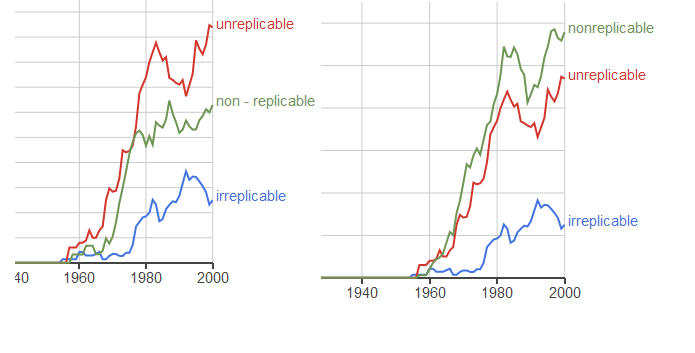 I think it is better to avoid any such dubious words in an academic thesis and instead, rephrase the sentence using some other expressions, as:

...while managing to invigorate nearly all viewers with irreproducible emotions.

Replicable means something for which a replica (a copy) can be created.

Reproducible means something that can be reproduced.

A replica is considered to be a more exact duplicate than a reproduction, but the terms "replicable" and "reproducible" are similar in meaning.

Would unrepeatable be an option?

I might even go so far as to say

invigorate nearly all viewers with unique and unrepeatable emotion.

Also, you might want to consider removing the comma before while:

...maintaining much significance itself while managing...

Not the answer you're looking for? Browse other questions tagged antonyms or ask your own question.