meaning of "slug" in a phrase

I've been rereading Heinlein's "Notebooks of Lazarus Long" recently and came across this phrase:

People who go broke in a big way never miss any meals. It is the poor jerk who is shy half a slug who must tighten his belt.

I understand what "shy (of)" means but I've checked dictionaries and can't figure out what "slug" refers to here. They propose meanings similar to this list:

I don't really see any of them fitting here. From the way it's said it seems to mean something (not very) valuable since the "poor jerk" is not "broke in a big way" but still has to "tighten his belt" = go without a meal or two.

Given the context -- a galactic traveler dispensing bits of wisdom -- I always took slug to mean a generic unit of currency because the concept applies on any planet.

Even here on Earth, we have dollars, pounds, euros, yen, pesos, rubles, and so on, so if one were to give the same advice here, you'd probably pick a slang term that could be applied to any -- buck, quid, etc.

Perhaps, in this specific context, the term slug could be replaced by the equally generic coin or unit or credit, all of which I've seen used in various SF novels.

Prior to the 1980s, vending machines were less sophisticated at detecting simple washers and stamped disks called:

A slug is a counterfeit coin that is used to make illegal purchases from a coin-operated device, such as a vending machine, payphone, parking meter, transit farebox, copy machine, coin laundry, gaming machine, or arcade game. -Wikipedia 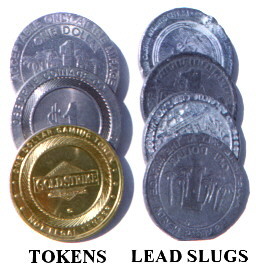 So I think the reference is to a less than complete piece of worthless metal, or in other words, almost nothing. The "poor jerk" is just another guy who did not go broke: he already was.

Cascabel's answer about the machine token slug is a good one, but metal slugs are in almost all circumstances whole and indivisible, making the reference to its half strange. I propose two other interpretations.

I translate that statement in completely different way. There is American informal idiom of being "half slug", i.e. not completely "slug". Original meaning refers to male genitals being neither firm nor flaccid, metaphorically it might mean "neither here, nor there", expressed in quite edgy way. Which fits to Lazarus' character.

So meaning of this is: Completely broke people never hesitate to get food in any way possible. Those who live near the edge of poverty (shy of - so, not completely, almost?) would still preserve their dignity, figuratively tightening their belts instead (enduring hunger).

Another version went into literary translation of that work: is related to meaning of slug as a metallic coin.. a dollar coin would be a "slug", "half a slug" is 50 cents. There is translation: "It is the poor jerk, who is too shy to solicit a half of dollar, must tighten his belt".

These "notebooks" were originally published as two "intermissions" in the 1973 novel "Time Enough for Love" and collected under the title "Notebooks of Lazarus Long" in 1978. The original book is from 1973.

Not the answer you're looking for? Browse other questions tagged single-word-requests meaning phrases meaning-in-context nouns or ask your own question.