Is "with all due respect" now mainly used as a sarcastic expression?

With all due respect is an idiomatic expression which has been used with he following meaning since the 19th century:.

but according to the following extract from the Grammarist its meaning has changed in recent years and its usage now suggests a sarcastic and possibly disrespectful tone:

The same topic is discussed also in the following extract from The writing tips:

But in popular culture, the expression has become associated more with insult than with respectful deference:

The 2006 movie Talladega Nights: The Ballad of Ricky Bobby, may have influenced the popularity of “with all due respect” used to introduce a blatantly disrespectful and offensive comment. At least twice in the movie, Ricky Bobby says something extremely vulgar to his team owner. He has the mistaken notion that prefacing a remark with the expression “with all due respect” gives a speaker license to insult and offend.

I think the phrase "with all due respect" has always been problematic when used as a preface for criticism. OED describes it as a variant of "with all respect" or "with great respect." The latter phrases imply that the speaker respects the entity being addressed, regardless of the situational dissent. "With all due respect" can really mean anything -- it could imply that the speaker believes the entity is owed no respect whatsoever, or that they are owed great respect, or anything in between. An idiomatic phrase with meaning that depends totally on context is naturally irritating.

I would argue that this is not new. Consider this piece in The New York Times, where a judge interrupts an attorney by sarcastically parroting the phrase twice, from 1896. 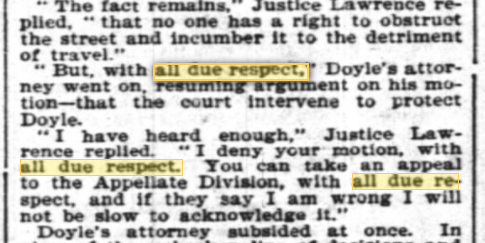 On the other hand, it certainly seems likely, based on the Grammarist article and the other sources the OP provided, that the phrase is used more often in a sarcastic way today than it was in the past. I think it's notable though that the most extreme cases of sarcasm are by comedians and bloggers. The phrase is still active with sincere intent as well. Perusing a Google News search on the phrase reveals numerous instances where the speaker or writer is not being sarcastic. I found these three articles published within the last 24 hours.

With all due respect to the Lions, who play a nice brand of football and aren't a bad team at all, it will be ridiculous, bordering on wrong, should they end up being crowned Super Rugby champions in 2017.

There's a new show that premiered three weeks ago on Comedy Central at 11:30 p.m. every Thursday called The President Show and, with all due respect to the SNL troupe, this show is even funnier and more relentless than anything we've seen elsewhere.

“We saw a guy at Vanderbilt that was a productive guy, but, with all due respect to Vanderbilt, this is a whole different ballgame," Texans coach Bill O'Brien said.

Is the phrase irritating and better off omitted? I would say so, and apparently, a lot of people agree. Is it often used in a sarcastic or insincere way? That seems undeniable.

Whether or not it is mainly a sarcastic expression is difficult to measure, but I'll summarize with two points:

"With all due respect" is ambiguous. The phrase shouldn't be used in polite conversation. I'd dislike it if I was sitting at an event and have somebody said that to me. I'd expect it if I was throwing popcorn at the back of their head!

0
How disrespectful is it to say "with all due respect if there is any due" and is there another way of saying this?

21
"In respect of" / "With respect to"
0
Can "To Date" be used with a from date?
9
Is the expression "one's cup of tea" used in American English?
19
Why "No smoking" works but "Yes smoking" doesn't?
9
Was "the mother of all" a common expression before Saddam Hussein used it?
0
Why is "dare" used in "One of you dare not fight with him"?
0
"And" used in a list with no comma