I have this book, donkey's years old—1991—called Cambridge Advanced English, written by Leo Jones. The topic of films, shows, and concerts is dealt with in chapter 3 but there's a problem, it's a student's book without answers, and there is no list where students can select answers from. Moreover, I gave it as homework to a private student of mine who's coming tomorrow. I have worked out all the answers (in capital letters) except for this particular one:

It's driving me potty, I want to say dialogue, but can dialogue be subtle? The term screenplay was one of the answers, so it can't be that. No term can be used more than twice.

Below are answers which I cannot reuse with "subtle"

I'm not 100% convinced by LIGHTING, is that the right term to use here? Is there a better one? Regardless, the one really bugging me is Q.3, it goes without saying, the term must be related to films/movies. 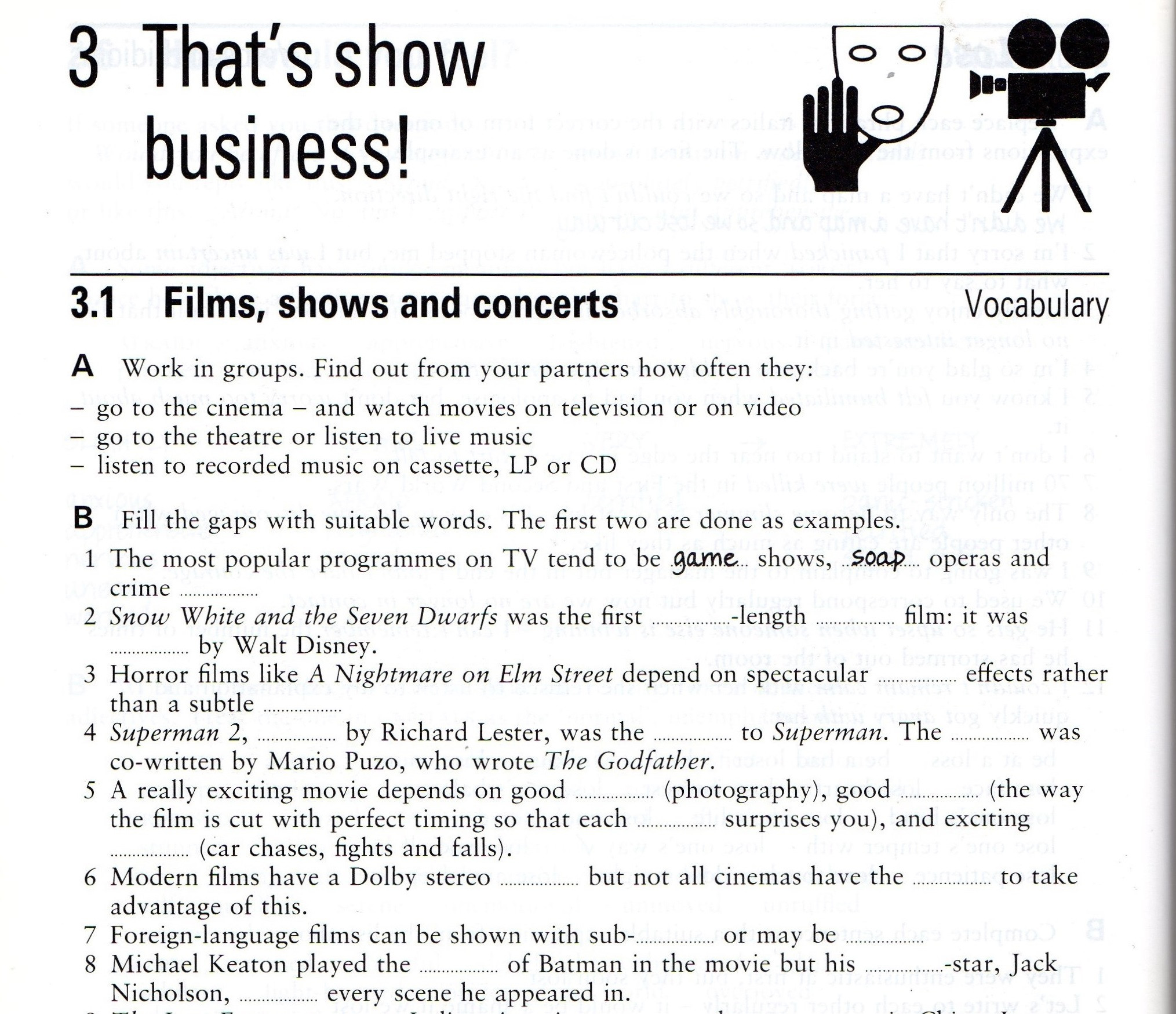 List of terms, in italics, which I have already used: game (shows); soap (operas); (crime) series; full-(length) animated (film); produced (by), special (effects); (a subtle) _____ ; directed (by); sequel (to); screenplay (was co-written); (good) lighting; (good) editing; (each) shot; (exciting) stunts; (a Dolby stereo) sound system; (the) technology / facilities (to take advantage of this); (sub-)titles; (may be) dubbed; (played the) role; co (-star); (Jack Nicholson) stole (every scene); (Italian-American) co-production; (shot on) location; (received a lot of) Academy Awards/Oscars; (was) overrated; (follow the) plot; flashbacks (to scenes); (the names of the stars and the) film / producers; (opening) credits; (complete) cast (of characters); played (them); (film) crew; (all the) extras; (new) production (by); sets (were designed).

Q. What can be inserted after ‘a subtle’ to contrast with ‘spectacular special effects’?

I've also found a site (here) which appears to have "borrowed heavily" from these books. The questions listed match those in the Student's Book -- if the answers that are listed came from the Teacher's Book, then the author intended:

Here's my answer, revised and reposted.

What @Scotty Colby might have meant was good cinematography.

A really exciting movie depends on good CINEMATOGRAPHY (photography), good EDITING (the way the film is cut with perfect timing so that each SHOT surprises you), and exciting STUNTS (car chases, fights and falls).

IMO, lighting is not a synonym for photography. Cinematography, on the other hand, is.

Someone who's in charge of lighting won't be fiddling around with how that ligthning will be depicted on the actual film, the way a cinematographer will.

Horror films like A Nightmare on Elm Street depend on spectacular SPECIAL effects rather than a subtle lighting (speaking of a mixture or effect delicately complex and understated).

I think I have it.

Horror films like A Nightmare on Elm Street depend on spectacular SPECIAL (or VISUAL) effects rather than a subtle SOUNDTRACK.

Music in horror films help create mood, tension, and suspense. A subtle soundtrack, which also includes sound effects and narration, would not rely on shrills, screams, or melodramatic musical scores to create a sense of impending doom. On the contrary, less is more, as Janus Bahs Jacquet mentions in the comments below.

According to Cambridge Dictionaries, the term soundtrack is countable, and it means:

soundtrack
noun [ C ]
the sounds, especially the music, of a film, or a separate recording of this:
- The best thing about the movie is its soundtrack.

Lastly I checked the collocation, there aren't many written instances of "subtle soundtrack" on the Internet, but I did find these two instances

With so many special effects and dramatic moments the Batman trilogy has become known for, fans might not notice the one thing that ties it all together: the music.

“A good film composer will enhance the dramatic message of the film,” said Harry Bulow, head of the School of Visual and Performing Arts. “After you watch a two-hour film you say, ‘Wow, that went by fast!’ That’s what you want.”

and a review mentioning the music in Alien

This soundtrack is all about suspense. The movie it accompanies is a very slow build in true 70s fashion, and the music moves at a similar pace. […]

The highlight of the score is the main theme, again edited heavily from the composer’s original intention to be far more subtle and ominous for the titles, but then settles to a simple melodic passage of lone brass. It is a soft, melodic piece of music that speaks of the void and loneliness of space. It is this initial pace of the film and the soundtrack that makes the later half so terrifying even when the soundtrack starts to evaporate to a more modern, stark, harsh reality…of everyone being munched by an alien.

For Q5, I might say that "a really exciting movie depends on good filmography cinematography (photography)..." rather than "lighting." (Here, I'm using "cinematography" in the second sense listed in the linked source.)

Q3 poses difficulty to me, too. Perhaps "mise-en-scene" fits the bill? The sentence is so general, though, that I would not fault even a professional filmmaker who couldn't choose what the author thought was correct. In the worst case, you could grade your student on her ability to explain why her answer would be appropriate or why she couldn't find a perfect fit, just as you have here.

Not the answer you're looking for? Browse other questions tagged single-word-requests collocation cinema or ask your own question.

1
Why can you not "improve your English ability"?
2
What are the scenes in action movies where two cars try to ram each other head-on called?
3
What verbs can you use in a sentence "The movie "Boyhood" runs for three hours"?
11
What is the origin of the phrase "And scene!"
0
What do you call a person who works on old home movies and paper photographs?
6
What is a word for an unaffiliated gunfighter in western movies?
7
Equivalent of “collocate” but for time rather than space
3
What are "marquees" (sign above the movies) called in British English?