When President Obama said-- lyingly-- that “if you like your plan, you can keep your plan,” his party ultimately paid for it. A reasonably competent Democratic Party, with something like the A.H.C.A. to run against, should be able to make Republicans pay dearly in their turn.

I have a decent vocabulary, but lyingly is a word I've not read or heard much, until recently. I'm interested in having a better feel for how this adverb is used and has been used in the past.

I've looked it up in Oxford Living Dictionary and don't feel very enlightened, though I understand its basic meaning: in a deliberately untruthful manner, mendaciously. i also understand that It is formed by adding -ly to the participial adjective, lying and that this in turn is derived from the verb, to lie.

My question is threefold:

Oxford English Dictionary cites variants of "lyingly" as far back as early translations of the Bible.

The spelling used in modern English is cited in 1682.

1682 Disc, Addresses or Presentm. to King 20 Their Popes (who go lyingly under the Name of Christ's Vicars).

Ngram seems to indicate that use, at least in books, has not increased in recent times, but in fact, has decreased since the 1980's.

Newspapers.com also indicates that the word was most commonly used in print in the 1980's: 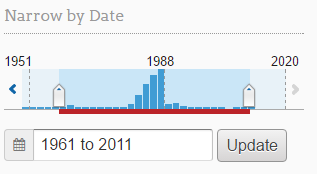 Searching on news.google.com finds few results, so I suspect the term was used by Douthat to add color to her writing, rather than as part of a recent trend in use.

Why the term seemed to have been used more frequently in the 80's is an interesting question. It could have been a linguistic trend, or the result of one high-profile use that led other writers to use the term. It could also have been connected to political affairs at the time, though I couldn't find any patterns suggesting that.

11
Meaning of "excited much", "stalker much"
4
'Evenest' vs 'most even' word usage and its history
0
Usage of "else" to convey the opposite meaning
2
Is "snug" still in common usage
8
History and usage of the term “furore”
14
History of the idiomatic usage of vanilla
0
Contemplate - meaning and usage