How many moons are in a week?

Often—in fiction—a character might say, "it's been seven moons since the death of my aunt Wilma." What exactly is a "moon"? How many moons are in an hour, in a day, in a week?

I'm scientifically interested in "moons" as a unit of time. Obviously, this varies based on what planet you are on, and of course, which moon you are referring to, but Earth has only one moon, so for the purpose of this question, Earth is the context.

time science mathematics
Share
Improve this question
asked May 2 '17 at 1:34

A moon is a unit of time corresponding to a month. Usually this means one lunar month when the Moon goes through its cycle of phases. There are thirteen lunar months in a year.

This means Aunt Wilma died seven months ago. There are remarkably few moons in a hour or in a day. The societies that measured time in moons lacked the technological contrivances make clocks. It can be described as an imprecise measure of time. But didn't matter because they didn't measure with precision we do. That sort of precision only came in with the railways.

The only scientific sense that moons are measures of time is the period of the lunar moon.

When you look up in the sky at the moon you'll see either nothing or one of these: 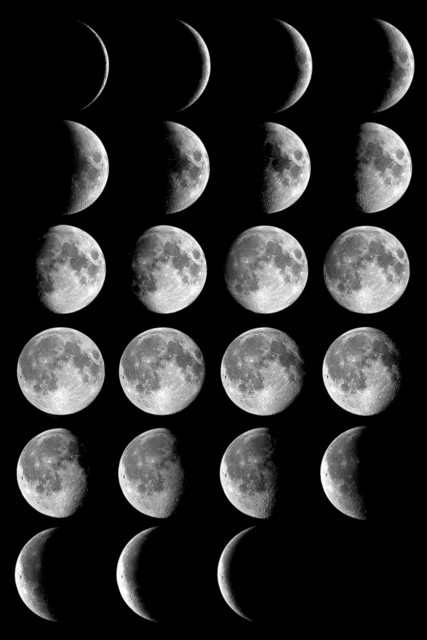 The biggest misconception is that the earth casts a shadow on the moon. It does not. Phases are caused by the illumination of the moon by the sun.

If it's been seven moons, it's been AT LEAST seven months since Auntie died. This can either be counted from the phase of the moon when Auntie died--it was at ANY specific phase and the character has seen that phase 7 times (like 1/2 or new), OR she died during any phase and the character has seen a full moon 7 times since then. As a4android says, in ancient times, it wasn't a precise measure, but a round about.

Get to know our cycles, how they work and why, so that when you are building another, you can figure it from there---just because planet has a single moon will not mean it works exactly like ours, with the same unit of time measurement.

As mentioned on the world-building stack exchange, "moon" in this context refers to a unit of time measuring one month, mostly in antiquated, archaic, or fantasy-writing settings. It derives, naturally, from the lunar cycle. The moon revolves around Earth twelve times per year, and in ancient history was an important tool for measuring time.

The word "month" actually has an etymological relationship with moon: 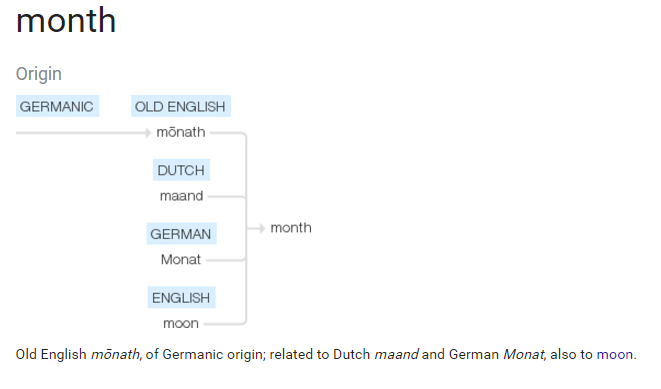 A moon cycle is 28 days (the time from one full moon to the next), so a week is 1/4 of a moon cycle. However, typically the people that measured time in full moons would not talk about quarters of the moon cycle; they measure smaller periods like a week in days or nights. Up to about a "fortnight" which was fourteen days which is half a moon cycle. They might use that period, 1/2.

The ideas of "hours" and "minutes" are pretty recent inventions only a few centuries old (maybe five centuries?) In a primarily rural and non-industrial world, examine the language we used before: "morning" "afternoon" and "night" were close enough, a "moment", "quickly", "hurry", and other timely notions are very general and can mean anything from seconds to hours depending on the context of the task: "quick" milking of goats is different than "come quick."

So things like an aunt dying a week or days ago could be described as "just happened", and not specified precisely at all: To a speaker not accustomed to thinking of life events as sharply delineated in time; if they are still in the emotional grips of such a death, in their mind the death may still be an event in progress. That may be alien to those of us raised on the clock; but unclocked people (not raised on a clock) can see their lives as a sequence of (sometimes overlapping) events.

For example; "I got married" followed by "I got pregnant". How much time passed between those events may not be known for an unclocked person, because nothing of similarly memorable import happened to her in-between those events.

Had we said it, it is like her asking us "how many miles did you walk in-between those events?" We don't know, most of us don't really keep track of how many miles we walk, and it would be hard to estimate.

So our unclocked mother may be able to tell us many other events she recalls that happened in-between without an exact handle on days, weeks or months. And without understanding why we think that makes any difference.

Not the answer you're looking for? Browse other questions tagged time science mathematics or ask your own question.

12
How did “next day” come to mean “day of next week”?
6
“Wednesday week”
2
How do you explain cubic growth of a function
8
What was the definition of “planet” like in English in the XVIII century?
93
How did English retain its non-Christian names of the week?
1
Why are there are so many words for “zero”?
1
Term to describe how much something has changed from its original configuration