Is this an adverbial complement? "They led me _to believe that there was no danger_."

I'm a novice who realised the existence of this site today. The following picture is from Idiomatic and Syntactic English Dictionary by A.S. Hornby: 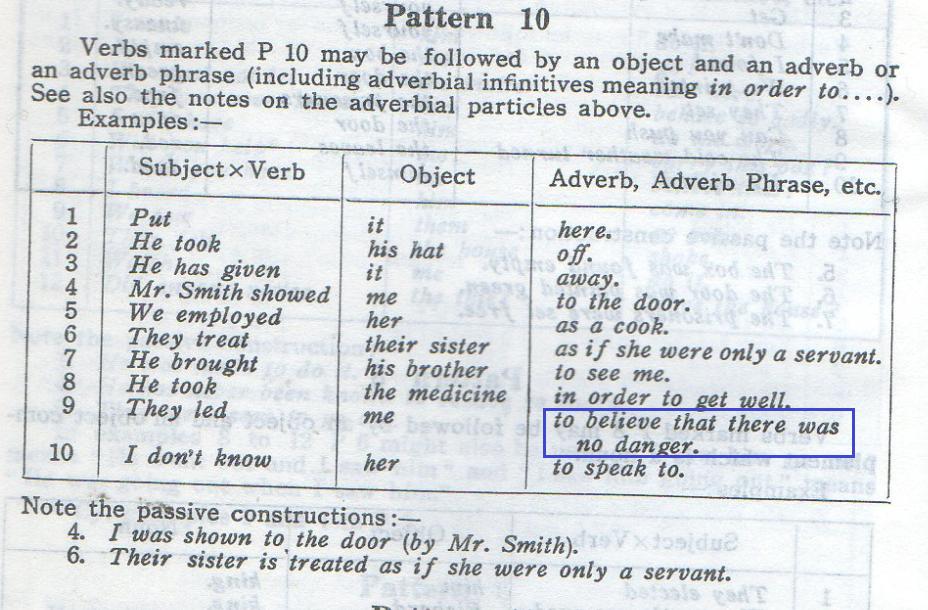 Verbs marked P 10 may be followed by an object and an adverb or an adverb phrase (including adverbial infinitives meaning in order to....). See also the notes on the adverbial participles abive.

I know that the infinitive phrase is a complement which is obligatory, not a modifier. I also learnt the term 'a catenative complement'. But I'm not content with that term alone. I really want to know whether an infinitive complement is used as adjectival or adverbial or nominal. It's out of curiosity which is something I have been doing for my own understanding.

grammar complements adverbials
Share
Improve this question
edited May 1, 2017 at 23:08

No, this is not an adverbial complement.

The sentence pattern is indeed S-V-O. The subject and verb are obvious. The direct object is the entire clause following, me to believe that there was no danger.

This type of clause is known as an infinitive clause. It consists of a subject, me in this case, and an infinitive or an infinitive phrase (the latter is the case here; the object if the infinitive is the indirect quote that there was no danger).

I hope that this clears everything up, though I fear that a long comment chain may spring into existence.

Not the answer you're looking for? Browse other questions tagged grammar complements adverbials or ask your own question.

7
Wikipedia's definition of "Adverbial"
2
'Out to get me.'
4
Why does "An Advanced English Syntax" say the infinitive in these sentences is adverbial?
5
Can prepositional phrases be subject complements?
5
What is the nature of, and syntactic distinction between, modifier and complement?
2
How to understand the "of somebody" part