What is the term used for a figurine in a board game?

I came across the word meeples in reference to a small figurine used in a board game. Are there other words used for the game pieces that people associate with board games such as Monoply that are figurines representing a person or object.

In addition to piece, the word token is commonly used.

If they are particularly detailed, these figurines are called miniatures or miniature figures. From Wikipedia:

A miniature figure (also known as a miniature, mini, figure, mini-fig or fig) is a small-scale representation of a historical or mythological entity used in miniature wargames, role-playing games, and dioramas. Miniature figures are commonly made of metal, plastic, or paper.

Although the Wikipedia definition connects these to particular game genres, in my experience it is applied to any model that is detailed enough. Note that this is not another term for the things called meeples, which are less detailed and more stylized than miniatures. In fact, meeples are often contrasted with miniatures, as in the board gaming podcast Meeples & Miniatures or this Kickstarter campaign promising to make "Roleplaying Game Meeples as a Miniature Alternative".

I probably would call Monopoly figurines miniatures, although they are in a bit of a gray area as they are not-to-scale relative to one another. A Google image search of "Monopoly miniatures" (excluding dollhouse terms, as miniature Monopoly boards are apparently a popular dollhouse entertainment) suggests that others do use this term for Monopoly's iconic race car et al.—and also that much of the appeal of various Monopoly special editions is in their various miniatures sets.

Original meeples, from the board game Carcassonne 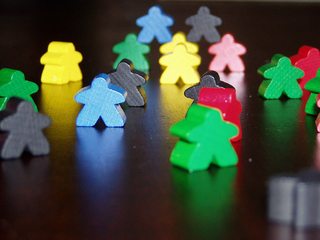 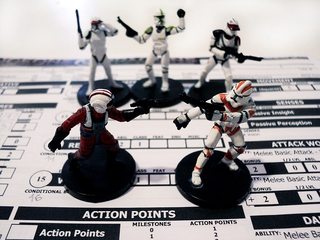 12. Chess, Checkers.
one of the figures, disks, blocks, or the like, of wood, ivory, or other material, used in playing, as on a board or table.

6
What is the term for words that can be used as the opposite of themselves?
3
What word is used to refer to a transvestite hater?
0
Synonyms for 'extra' (noun)
3
Is there a term for “distinguishing between different concepts through the use of different, though synonymous, words”?
1
Terms for game mode depending on number of players
6
The term for a person who provides a reference for someone for a job