What does “that Frank Sinatra at the bar act” mean in this sentence?

When I read a comic book called "Thief of Thieves" by Robert Kirkman, I cannot understand the scene below:

The man is drinking alone at the bar counter and seems deep in thought. And the woman, who was asked by him to meet at the bar, comes and says "Okay, I don't really care how deep you are in that Frank Sinatra at the bar act...you're still buying." They are kind of friends (although their relationship is much more complicated, I just say they are friends to simplify the context).

What does she mean by "that Frank Sinatra at the bar act"? I googled Frank Sinatra and bar but couldn't find other than this medley and Sinatra Piano Bar. Could someone help me with this?

Below is the typical, melancholic image that many Frank Sinatra fans carry of him: sitting at a bar in a trilby hat, a lighted cigarette in one hand, and the perennial glass of hard liquor in the other. Despite the forlorn gaze, Frank Sinatra was one of the best-paid performers in his day, and could easily afford to pay for a couple of drinks. 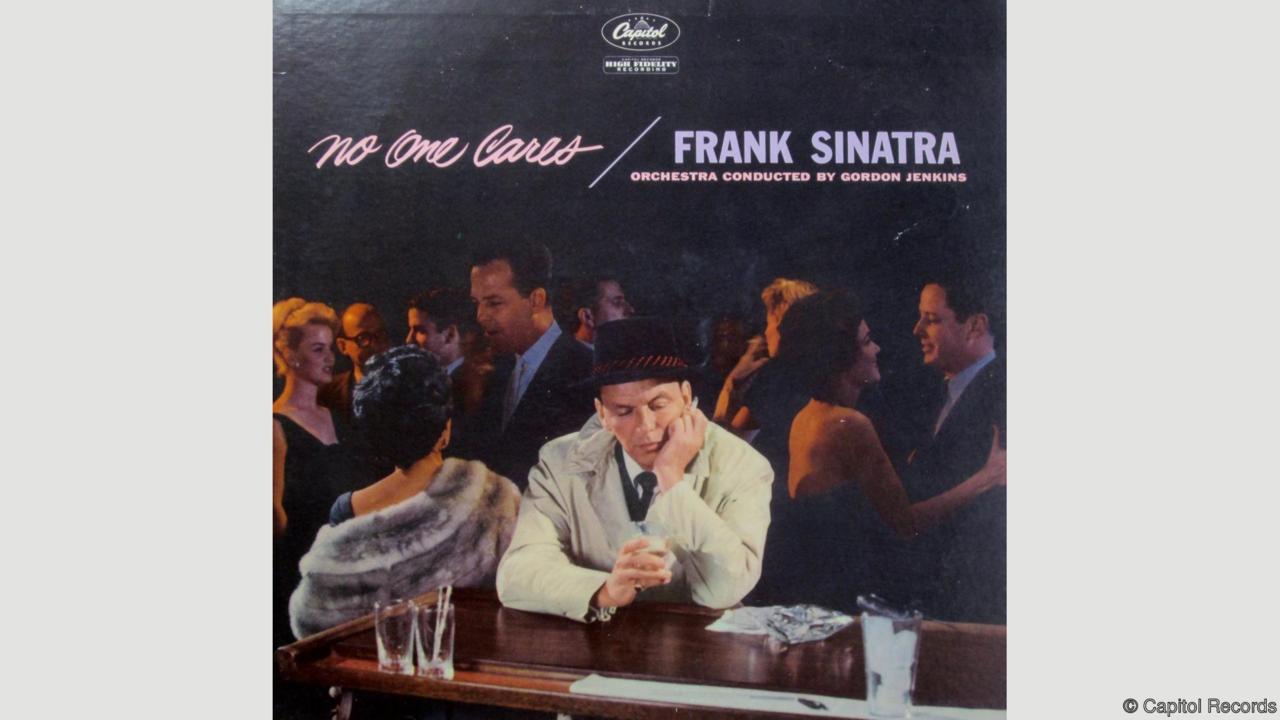 The line, the Frank Sinatra at the bar act is an original expression, created by the author to suit his specific needs and purposes. The writer could have used hyphens, as suggested by @Lambe in the comments, or used single quotes for clarity. Why he didn't is anyone's guess.

I don't really care how deep you are in that ‘Frank Sinatra at the bar’ act... you're still buying.”

7. (Noun) a show of feeling or behavior that is not sincere and is put on just for effect
- There were moments when I wondered: did she do this on purpose, was it all just a game, an act?

Frank Sinatra was termed by some a functioning alcoholic:

Frank Sinatra was a functioning alcoholic, who went cold turkey on his love of booze and cigarettes in the weeks running up to recording sessions to save his voice...We gathered information that, from the mid-40s on, he was really seriously abusing the booze, and, even in his later life, drinking a bottle of Jack Daniels a day.

The daily beast elaborates in the article How Frank Sinatra drank American Whiskey His Way:

While Sinatra famously liked to enjoy a glass of whiskey (especially on stage)...Long before he was hanging out in Vegas and Palm Springs with Dean Martin, Peter Lawford, Joey Bishop and Sammy Davis Jr., Sinatra was quite comfortable inside a bar and learned at an early age the allure of liquor. That’s because he literally grew up inside a speakeasy...During Prohibition his father, Marty Sinatra, ran a joint in their hometown of Hoboken, New Jersey...It was also in his family’s bar that an eight-year-old Sinatra launched his career singing for the patrons when he wasn’t shining their shoes. His affinity for watering holes continued well after Repeal.

The phrase in your passage is referring to the fact that the character in question was sitting on their own at a bar drinking alcohol, a trait many would consider (rightly or wrongly) a sign of some kind of alcohol dependency. From your explanation of the relationship between the two characters it appears to have been said in jest, so is not necessarily pejorative.

The use of the word 'act' reinforces the playful use of the phrase, the woman indicating she doesn't believe this behaviour comes naturally to the male character.

Not the answer you're looking for? Browse other questions tagged meaning meaning-in-context pop-culture or ask your own question.