What is "half a dollar" in pre-decimal British currency slang?

I've been listening to the BBC Radio show Hancock's Half Hour which was set in working class 50s/60s Britain before we decimalised our currency, and being in a very lower-class cockney London setting it's full of slang terms for currency such as bob, knicker and tanner, but one term I'm having trouble translating is "half a dollar", as in "The Chef That Died Of Shame" (around 4:49) in which Tony is running a horse-drawn hot pie stall.

What would "half a dollar" mean in real money at the time? Where did the term come from?

Tony Hancock (the character shared the name with the actor) was always depicted as an old and old-fashioned character too, so it may be a lot earlier than the broadcast dates, any time from the 1900s to 1945 based on the standard age of the references in the show. 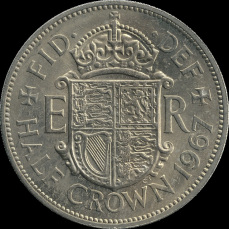 The origin appears to derive from the following historical facts:

It goes back to the Napoleonic Wars. Britain was short of gold and silver coinage because most of it was used to finance the War abroad. Spanish dollars were imported to fill the gap and given the nominal value of 5 shillings, although, despite being about the same size they were actually worth a little less in terms of silver content. Hence, 5/- was a dollar and 2/6 as a half-dollar.

(Oman's History of the Peninsular War)

Taken from a book I have in my possession entitled "Instructions for American Servicemen in Britain 1942” (ISBN 1-85124-085-3) there is a page on monetary conversion between £Pound versus $USDollar. £1 is listed as $4, and 5 shillings (being a quarter of a £1 and also known as a crown) is listed as $1. A common coin in circulation was the half-crown (known as ‘2 and 6’ or ‘2 shillings and sixpence’, and written as 2/6) was therefore also referred to as half a dollar. QED.

Not the answer you're looking for? Browse other questions tagged british-english slang money or ask your own question.

10
Why are pounds sterling called "knicker"?